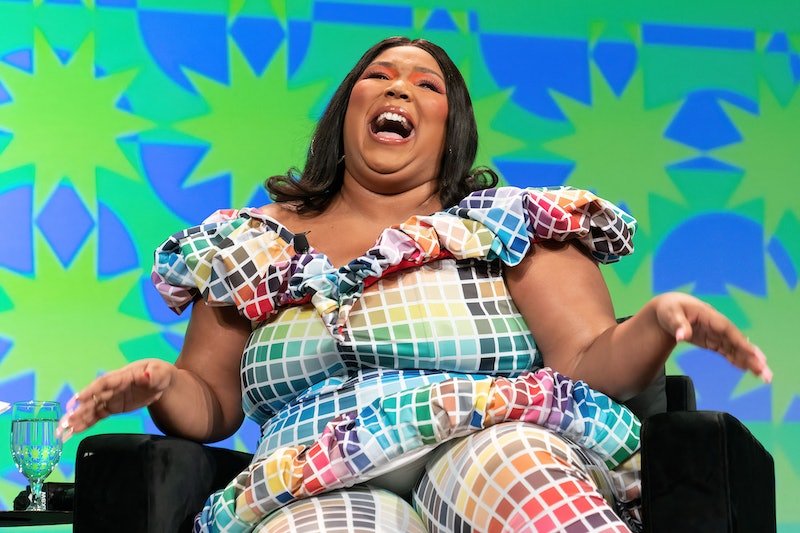 Lizzo just took a DNA test and it turns out she’s actually not 100% that b*tch. As she told viewers in her Saturday Night Live monologue on April 16, she’s about “50% that b*tch, 10% boss b*tch, and 40% flute-playing, band nerd b*tch.” But what she actually wants to be is Chris Evans’ baby mama. During her monologue, Lizzo nodded to the TikTok video she made about her celebrity crush in August 2021, where she joked about being pregnant with Evans’ baby.

The “Truth Hurts” singer addressed hilarious fan “gossip” that she’s “dating every little white boy in Hollywood,” including every member of One Direction and, of course, Captain America. “I even heard that I’m pregnant with Chris Evans’ baby. I have no idea where that one started. It could be the TikTok I did where I said, ‘I’m pregnant with Chris Evans’ baby,’” she said, breaking out into laughter. “It’s called manifesting.”

Elsewhere in her opening monologue, Lizzo expressed shock that she was wearing clothes on SNL and vowed to break the world record for the amount of times the word “b*tch” was said on live TV. Guinness World Records has not commented on the status of her attempt.

During her first performance, Lizzo once again proved that she is indeed part “flute-playing, band nerd b*tch.” In an SNL first, Lizzo introduced herself as the night’s musical guest, saying “Ladies and gentleman, me!” before taking the stage to give the first live performance of her new single “About Damn Time.” Midway through the song, she brought out her famous instrument, Sasha Flute, which later received an SNL sketch of its own, and gave viewers a classic Lizzo flute solo.

In a sentimental twist, Lizzo was introduced by her mother Shari for her second performance of the night, where she premiered the title track of her upcoming album Special. Donning a decadent pink gown, the musician poured her heart out on another one of her signature self-empowerment anthems. “If nobody told you today, you’re special,” she sings on the chorus. While it’s not known when the song will be released, Lizzo’s new album is scheduled to come out on July 15.

More like this
Michael B. Jordan Tackled His "Public Breakup" With Lori Harvey On 'SNL'
By Brad Witter
The Black Lotus Staff Has "Had Enough" In The 'White Lotus' Spoof From 'SNL'
By Brad Witter
Who Is Pete Davidson Dating? He & Chase Sui Wonders Got Caught Kissing
By Jake Viswanath
Linda Ronstadt’s “Long Long Time” Plays A Pivotal Role In The Last Of Us
By Brad Witter
Get Even More From Bustle — Sign Up For The Newsletter
From hair trends to relationship advice, our daily newsletter has everything you need to sound like a person who’s on TikTok, even if you aren’t.