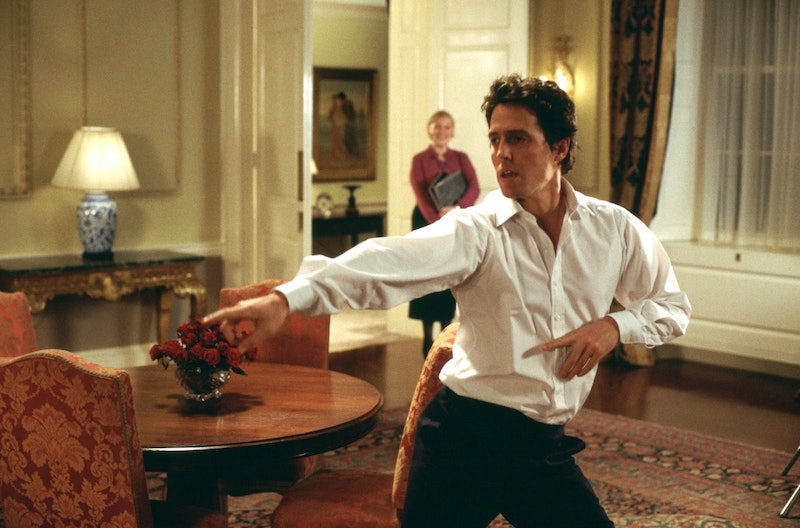 With the festive season in full swing, many of us will revisit some of our favourite Christmas movie classics from years gone by. Whether that be Home Alone, Elf, The Holiday, or the 2003 romantic comedy, Love Actually.

Starring the likes of Emma Thompson, Keira Knightley, Liam Neeson, and Colin Firth, the film follows nine intertwined stories that delve into the most powerful emotion that binds us all together: love.

In the years following its release, Love Actually has become a staple seasonal watch, and the impact of the film can be felt way beyond its early-noughties debut. Most recently, in Ed Sheeran and Elton John’s “Merry Christmas” music video.

But, with each retrospective watch, new questions and theories surrounding the plot and characters of the beloved yuletide flick seem to emerge — and the most pressing question of late is what political party does Prime Minister David, portrayed by Hugh Grant, actually belong to?

“In Love Actually is Prime Minister Hugh Grant Labour or a Tory as I’m so conflicted,” wrote one curious Twitter user.

“He derided the former Government, hinting he could be a Conservative, but he acted like a Blairite ‘New Labour’ type. But Blair (nor the Tories) would ever jeapordise the Special Relationship,” another user pondered.

But where does Love Actually’s Prime Minister David fall on the political spectrum?

Sadly, if you’re in search of a definitive answer, you’re out of luck. Per Grazia, the writer and director of the festive rom-com, Richard Curtis, set the record straight (kind of) while replying to a reporter who quizzed him about the political allegiance of Grant’s character.

“This is such a sad moment,” Curtis wrote in an email. “I’m willing to reveal almost anything about Love Actually — but there’s no answer to that one. It’s a bit like Hugh’s job in Four Weddings — I never let my mind go there… I hope to be back in the offices before too long, and then I’ll try and compensate with some proper answers.”

So, for now, at least, Prime Minister David’s political ideologies remain a mystery.

More like this
Rupert Grint Just Shared A *Major* Update About Ron Weasley’s Future
By El Hunt
'Abbott Elementary' Fans Probably Missed This 'Parent Trap' Easter Egg
By Sam Ramsden
Michaela Coel Has Some *Thoughts* About The Nepo Baby Discourse
By Maxine Harrison
'Boiling Point's TV Sequel Is Set To Deliver A “Rollercoaster Of Emotions”
By Catharina Cheung and Sophie McEvoy
Get The Very Best Of Bustle/UK
Sign up for Bustle UK's twice-weekly newsletter, featuring the latest must-watch TV, moving personal stories, and expert advice on the hottest viral buys.