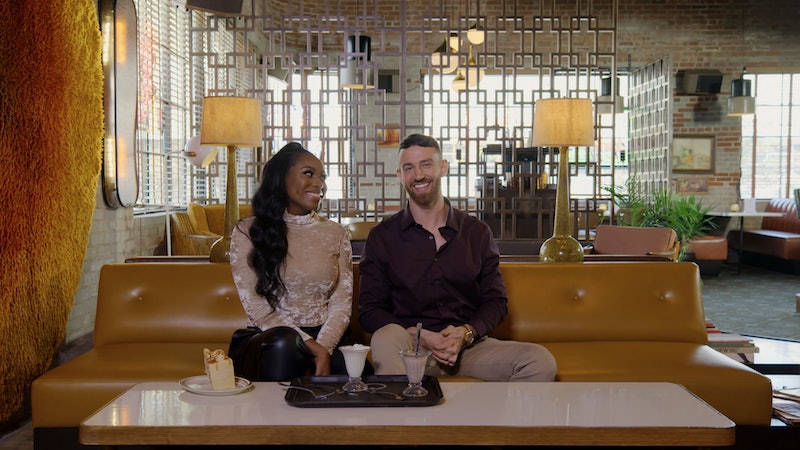 A year after a group of contestants showed the world what socially distanced dating looks like before anyone knew it would quickly become a scary reality, the Love Is Blind cast will gather once again to remind everyone why it’s one of Netflix’s most popular series. Their first reunion came shortly after the events of Season 1, but this special three-episode event is tied to two couples’ wedding anniversaries.

As avid Love Is Blind fans know, amid all the dog wine drinking, declarations that their partner doesn’t excite them anymore, and explosive breakups, came two solid relationships. As of 2021, Cameron Hamilton and Lauren Speed as well as Amber Pike and Matt Barnett are still happily married and want to share how their unions are going. In Love Is Blind: After the Altar, the Hamiltons and Barnetts will reunite with the Season 1 cast, which will surely provide plenty of drama. Ahead of the streaming special, here’s everything to know:

What Are The Love Is Blind: After The Altar Episodes About?

According to the official Netflix synopsis, After the Altar will “catch up with your favorite couples and singles as they settle back into their daily lives in Atlanta.” In a press release, the streaming platform teased:

“How will Amber and Barnett feel about seeing Jessica? Will Diamond and Carlton ever make amends? Who might make a surprise appearance? And who won’t even show up for the party because of all the drama that’s happened in the past two years? Ultimately, when it comes to love, the experiment never ends.”

The After The Altar Trailer

On July 8, Netflix released a trailer for After the Altar, and it looks like enough drama to last until Season 2 premieres — likely in 2021 — and Season 3 sometime after that. In the brief clip, fans can already get a taste of how the show impacted Carlton Morton, if Jessica Batten and Matt are on speaking terms, and if Giannina Gibelli and Damian Powers’ sex life has improved at all. There were eye rolls aplenty, hints at betrayal, and, of course, celebratory cheers considering this is supposed to be a happy occasion.

In the second trailer, released on July 26, the married and former couples’ relationships were further explored. As he fist-bumped Matt, Cameron confirmed that he and Lauren are not using condoms, suggesting they could be trying to have a baby. And in true Giannina and Damian fashion, they had a public argument about their relationship and his relationship with a woman named Francesca.

The After The Altar Release Date

Luckily, subscribers won’t have to wait long to watch After the Altar. While Netflix just treated fans to the two trailers, the three episodes will follow in a matter of days. Come July 28, After the Altar will hit the streaming platform. In the meantime, Love Is Blind is still casting for upcoming seasons, so if going back into isolation sounds fun to you, you might want to check out the application on loveisblind.castingcrane.com.

More like this
'Love Is Blind: After The Altar' Season 3 Has A Release Date & It's Very Soon
By Grace Wehniainen
Andy Cohen Apologized To Larsa Pippen After A 'RHOM' Season 5 Reunion Dust-Up
By Brad Witter
Love Is Blind’s Natalie Claims Shayne Signed Up For 'Perfect Match' While They Were “Still Together”
By Brad Witter
Shaq Might've Spoiled His Relationship Status With Kirsten After 'MAFS'
By Brad Witter
Get Even More From Bustle — Sign Up For The Newsletter
From hair trends to relationship advice, our daily newsletter has everything you need to sound like a person who’s on TikTok, even if you aren’t.

This article was originally published on July 8, 2021