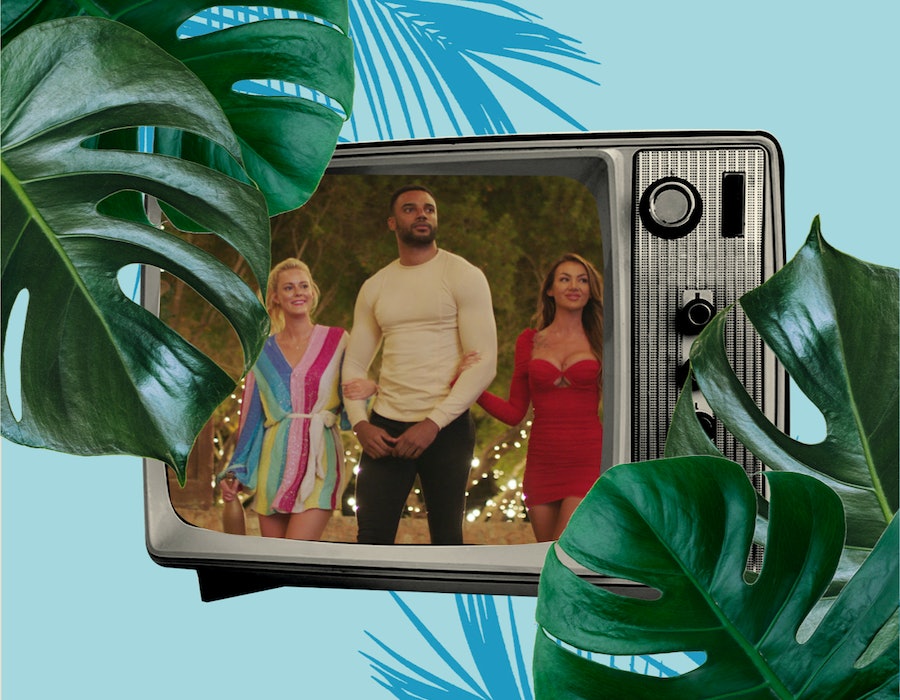 I think this week we can all agree that Love Island “understood the assignment”. Without launching into too much of an impassioned defence of the show, the explosive and dramatic scenes of Week Four (which will go down in the history of British reality TV as absolute classics) are perhaps the greatest testament to the fact that Love Island viewing is all about trusting the process. Time invested in the slow bits (like the iced coffee sub-plot) are just part of the build up to these must-see moments, which ultimately make it all worth it.

Beyond the desire for more gripping scenes (we got them in spades) viewers had three key demands for moving the Love Island timeline forward: securing a man for Kaz, disrupting the deeply unlikeable Chloby, and rescuing Hugo from his own romantic apathy. Enter three bombshells: Tyler, Abigail, and Georgia.

For the first assignment – securing Kaz and restoring her confidence in her own sauce – Tyler passed with flying colours. And what a fine specimen of a man he is. 6’6, built, and with a gorgeous smile; I was half tempted to pitch a last minute LGBT twist to the series, and enter as the first gay bombshell to couple up with him myself. Like many others, I was sceptical of Tyler’s intentions at first. The constant need to describe Black women based on their “energy” rather than their appearance is exhausting, and seems to set up a false “looks vs personality” binary, which fails to apply to Kaz who clearly serves both. But, he was quick to affirm his attraction, going on to provide the steamiest balcony kiss of the season thus far.

There’s always the fear that, having seen Kaz’s popularity, Tyler’s pursued her to secure his place in the villa (note how Aaron was sent packing as soon as he left his friendship couple with Kaz), but their interactions and chemistry appear genuine. My only frustration so far is their relationship hasn’t been given enough time to marinate before Casa Amor. Neither could really be begrudged for having their heads turned, and it appears that multiple men have their eyes on Kaz. Either way, even if this transpires as a temporary romance, and so long as Kaz isn’t left standing alone at the end of Casa Amor, it can be packaged up as one of the real feel-good moments of the show, basking in the glow of the not-so-romantic sparks flying between Chloe and Toby.

Enter Abigail. I’m in full support of a popular theory that Abigail is a fellow Kaz stan, who came in with the sole intention of avenging her, interest in Toby being absolutely secondary. Regardless of whether that theory has any truth to it, she’s easily proved herself the top striker of this series, securing her man in record time. Viewers called for a Megan Barton-Hanson femme fatale, and Abigail answered, instantly instructing Toby to “dump Chloe and get with me.”

Of course, Toby is a pretty easy assignment. The boy seems to blow with the wind, quickly influenced by any external force. But it’s also clear that his reason for abandoning Chloe is less to do with him no longer being interested in her, and more to do with the fact that he can’t cope with his popularity taking a hit. He’s thrown genuine tantrums each time he’s ranked low in the public vote; failing to step into the villain energy required of any islander who casts aside their partner for the next sexy young thing to walk in. He simply doesn’t have the range or maturity, beyond stomping his feet and scrambling for a resolution.

That said, I honestly do believe that Abigail has made Toby more likeable. If you look past the circumstances of their coupling up, there seems to be genuine chemistry. While Toby is a weathervane, if I had to make my predictions, I think he’ll decline to recouple at Casa Amor in attempt to salvage some reputation, only to find Abigail unbothered with a new bombshell on her arm. But honestly, I’m happy to be wrong either way.

And now we get to Georgia, who is really my conduit to talk about Hugo. Tragically, that’s perhaps all Georgia ever was on the show: never her own woman, purely defined by her pursuit of, and very swift rejection by Hugo. Entering the villa with the conservative glamour of a Stepford Wife amongst Footballer’s Wives, Georgia, while not “diverse” in the sense of body type, ethnicity, or – God knows it – hair colour, represented a very different kind of Love Island contestant. Yes, she’s incredibly attractive, but she’s not the type you’d imagine doing the VIP club appearances, or posing in front of the I Saw It First backdrop.

Georgia’s assignment was always destined for disaster. Hugo appears to not be making any romantic effort whatsoever with the girls on the show. He quickly shut things down with Georgia, as there wasn’t “an instant spark” during their first conversation. Is that a realistic metric, particularly on a show like Love Island? I think not. Of course, there’s no point forcing an attraction that’s not there, but Hugo’s current presence in the villa fits the recurring motif of the eternally struggling single guy that we’ve seen in previous seasons – Dr Alex, Anton, Nas. However, those boys all made attempts to explore connections with new girls, even if they weren’t necessarily perfectly aligned. Some might think I’m harsh for suggesting Hugo should be dumped for wasting screen time (after all, he’s given us one of the most dramatic moments this season), but it does become exhausting watching him not even try to explore romantic possibilities.

It struck me as the kind of “nice guy” fake ally pandering, less concerned for the welfare of the women in the villa than it seems, more motivated by his own jealousies.

Of course, there is the mitigating fact that Hugo is clearly in love with Chloe. Perhaps he was taking his frustrations out on Toby to cope with languishing in the friend-zone. Let’s not analyse that recoupling speech in too much detail, but it clearly divided viewers into Team Hugo and Not Exactly Team Toby, But Definitely Not Team Hugo. It struck me as the kind of “nice guy” fake ally pandering, less concerned for the welfare of the women in the villa than it seems, more motivated by his own jealousies. After all, Hugo isn’t particularly tactful. I confess to defending him during filler-gate, but let’s be honest, him repeatedly emphasising his dislike of “fake” girls in front of those with clear cosmetic enhancements doesn’t show the respect he’s attempting to discipline Toby for lacking. Neither did his dismissal of Georgia, who had to stand there quietly as Hugo launched into his heroic monologue, with Chloe as his solo backing dancer, throwing up gang signs and ad libs. Yes, maybe Toby deserved a telling off – to emphasise, I’m no fan of his either – but Hugo’s conduct towards Toby is veering into soft bullying and humiliation. The repeated sly digs during the Love Island sports day – “I know you like playing the game, boy”, in fact, the constant repetition of “boy” – evidence a need to condescend and emasculate Toby. It seems this has little to do with feminist ally defence, and more to do with Hugo’s own ego.

Anyway, who cares, because we’re now on the cusp of the first Casa Amor episode. This is perhaps the deadliest line up of Casa girls I’ve ever seen, and Jake’s decision to make Liberty his girlfriend this week, upgrading his inevitable head turn from betrayal to full-blown adultery, is sure to make for equally difficult and delicious viewing. My biggest question is whether Hugo will actually attempt to get to know the girls, or continue to offer his services as a concierge, maid, and life coach. At which point, perhaps my criticism will be vindicated.