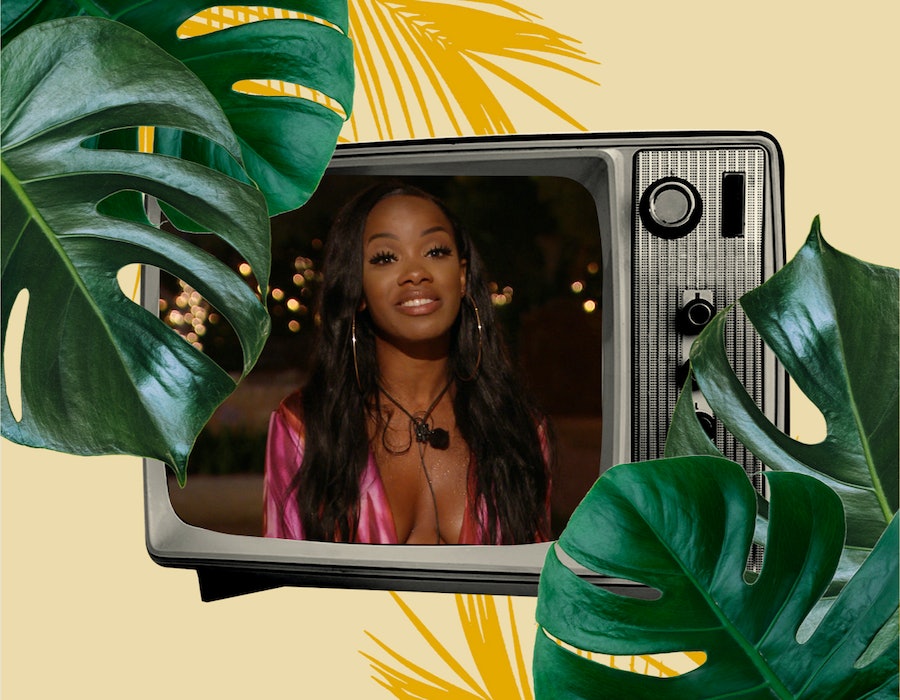 I hope you will forgive me for the one-day delay of this column, usually published on a Monday. But I, like much of the nation, was nursing the heartbreak of England’s footballing defeat. For the first time since watching Love Island I’ve been genuinely grateful that the week ended on a cliffhanger – concluding with the announcement of a recoupling, but no indication of the order it would occur in or which girls would be left standing.

Having seen Monday’s episode, we now know that it was Rachel sent packing, as Teddy coupled up with Faye. I won’t pretend that I’m going to be mourning Rachel’s departure, to be honest at moments it became difficult to watch her – the sobbing over someone as unworthy as Brad, stacking into the railings during the Line of Booty challenge, the walk! But it doesn’t escape me that she’s fallen victim to Love Island’s punishing ground game, which dictates that you either entertain, pull looks, fall in love – or get out.

Of course, that is a fairly standard remit for reality television. What more do we want from contestants on a show like Love Island than to make great quality viewing? However, the role that the producers play in manufacturing these scenes cannot be overlooked. On entering the villa, Rachel was praised for making history as the show’s first Black bombshell outside of Casa Amor. This seemed to mark a shift in thinking from Love Island’s overlords, showing that Black women can be considered desirable enough to turn heads and cause chaos in the villa. Except she wasn’t quite that, was she? The immediate default option of coupling up with Brad or Chuggs meant that they just had to play along, faking an interest in Rachel in order to stay in the competition.

No sooner had Rachel selected Brad than she was quickly abandoned by him and, with little direction or storyline arc, left to try to fit in with the girls, who had also already formed strong bonds with each other. Curiously floating around in Week Two, the most we saw of Rachel was her weeping at the sudden U-turn of Brad’s affections. As author Amelia Horgan notes, “Contestants try desperately to triangulate between their own feelings, their interpretation of the suggestions given by producers, and what they imagine audiences at home might be thinking.” In Rachel, you could see the desire to project a confident, “bad bitch” energy to win over the audience, mired by the genuine distress she seemed to feel at Brad’s rejection. Her subsequent pursuit of Teddy followed the ramped-up sex-factor trope I wrote about last week – talking about orgasms within five minutes of meeting, and the difficult-to-watch grilling of what turns him on sexually.

All in all, Rachel’s trajectory was strange. Her swift gear shift from game-changing sensation to overly keen outsider in just one week proves two things: how disposable contestants are in this show, and how attempts to tweak diversity are of no use when desirability hierarchies still continue to distribute the expected outcomes and expected rejections.

Attempts to tweak diversity are of no use when desirability hierarchies still continue to distribute the expected outcomes and expected rejections.

This week, all of my worst ‘talking stage’ nightmares with men played out on screen. Liam stared at Faye over breakfast with zero interest, Brad’s “mask off” encouragement for Rachel to look elsewhere was cold, and the less I say about Toby and Jake the better. But, what I felt most strongly about this week was that these men are utterly undeserving of the women they interact with. Introducing stunning bombshells Lucinda and Millie – the epitome of the “blonde and petite” profile that these men obsess over – felt strikingly unfair considering just how starved the other women were of men who matched them in maturity, commitment, and age. (The balance of young boys to slightly older 20-something women this season is, to me, a large reason why chemistry is so absent.)

Aaron dumping Sharon when she barely raised her voice towards Hugo (who, I must cut in to say, remains the most wonderful and pure boy in the villa) felt like a weak decision. Then seeing them cuddling in bed days later, when it was apparent that the new girls were more interested in Brad and Liam, felt like a callous play on Sharon’s emotions. So, after a week of emotional hostage situations, energy switch ups, and unconcealed loathing, it felt uncharitable that the girls were thrown just one new man. While Teddy is undoubtedly a golden hunk of a man, his singular presence felt unsatisfactory. Having said that, I am pleased he’s coupled up with Faye – who I continue to admire for her refusal to pine over a man. I’m interested in whether Teddy will evoke a different emotional range from Faye, hopefully allowing her to explore and reckon with her dating past.

Elsewhere, Toby’s instant energy change once Chloe declared her interest in him felt unpleasant to watch. Of course, the aim of the game is to couple up with the person you feel most compatible with and attracted to, so technically Toby and Chloe haven’t done anything “wrong”. But, Toby had ample opportunities to end things with Kaz, or steer them towards being a friendship couple – as a number of the others had already done. However, he seemed to enjoy this imbalance in his relationship with Kaz; the fact that Kaz was vying for his affections and that he seemed to hold all the cards. Toby even seemed disappointed with Kaz’s calm reaction to him kissing Chloe, like she should have been distressed or hysterical over him leaving. Yeah, right.

With Chloe being de facto named the most attractive girl in the villa by all boys present in that previous challenge, the words “trophy wife” have never felt more relevant. It’s clear that a large part of Toby’s attraction to her is the firm seal of approval from the boys, the feeling that he’s “won” what’s most coveted. Chloe is all too aware of this, instantly allying with Millie and Lucinda, painfully labelling themselves the “naughty trio”. If they refuse to see just how awkward the optics of that is, I’m hoping a disbandment of the trio engineered by the public vote will send a clear enough message.