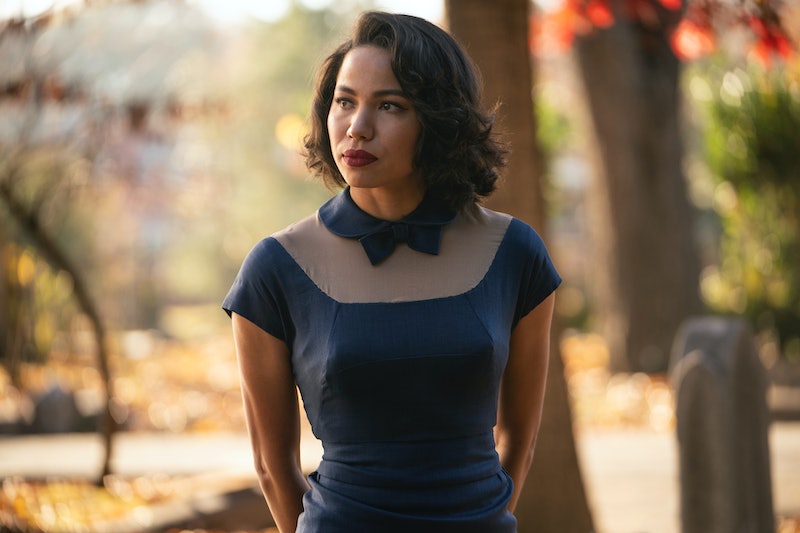 Spoilers ahead for the Lovecraft Country Season 1 finale. Lovecraft Country's Season 1 finale brought the show full circle, returning Tic and his family to the ruins of Ardham Lodge to confront Christina Braithwaite one last time. But while it tied up some loose ends, it also left quite a few cliffhangers for a potential Season 2. Let's break down everything that happened, and what it all could mean for future storylines.

Hannah and the Book of Names

The Book of Names has been a mystery all season, and in the finale Tic's ancestor Hannah finally explains what she did with it after stealing it from Titus Braithwaite. She used its spells to hide their bloodline — aka the birthmark they all carry — from other magic users, and created an "ancestral plane" for them in the process. It's in this space that Tic is finally able to reunite with his mother Dora and aunt Hattie, as well as speak directly to Hannah. The women explain that Hannah's been working on a special binding spell for a century that will "change everything" by preventing white people from ever using magic again.

Once back in the land of the living, Tic and Leti head back down to Titus' tomb to summon him in a salt circle. Tic needs a physical connection between him, Titus, and Christina to make Hannah's spell work, so he literally carves out a piece of Titus' flesh (to later eat, very unfortunately). It's not clear if Tic's actions actually "killed" Titus though. Is it possible to kill a ghost?

After encountering Titus, Leti and Tic say a spell that causes Dora, Hattie, and Hannah to disappear in a cloud of smoke, making it unclear where they went. Did they just return to the ancestral plane, where they can be contacted again? Or did the emotional music hint that they're now free to move on to the afterlife after having passed their knowledge to Tic and Leti?

What Does Hippolyta's Comic Book Mean?

Back at home, a now blue-haired Hippolyta reveals to Dee that she has a polished version of Dee's Orinthya Blue comics. This is probably one of the most intriguing parts in the episode, as the "Afua" who Hippolyta mentions is in fact Afua Richardson, the Eisner-winning creator of Black Panther World of Wakanda and current artist on Lovecraft Country. It's Richardson who's been crafting the comic books that Dee hands out in the show, and the fact that Hippolyta names her opens an interesting question: is Hippolyta still able to jump across the multiverse? And did she actually visit our own world?

Why Wasn't Leti at Her Mom's Funeral?

As Ruby and Leti gear up to take on Christina, Leti finally reveals why she didn't go to their mom's funeral: a longstanding issue that caused a rift between the sisters. Leti was in jail at the time, but we don't know why.

Leti's joy over reconnecting with Ruby is ruined the moment Christina reveals she's been posing as Ruby during their whole trip. She also claims that she killed Ruby for trying to steal her blood for the spell. (Side note: this makes that joyful scene of them all singing in the car feel like a complete travesty). But we don't actually see Ruby's body, and even if she is dead or in a coma, is it possible the Book of Names can reverse it?

With the existence of magic and time travel, nothing seems permanent in the world of Lovecraft Country, but as of right now it does look like Tic is really dead. Christina mentions that she used the energy released when William died to create the spell for her transmutation potion; similarly, Tic realizes he needs to generate that energy to set Hannah's spell into motion. So he sacrifices his life, and in the end it's Ji-Ah who weaves the spell together. She uses her Kumiho tails to literally bind Christina's body to Tic, who had already consumed Titus' flesh. She acts as a conduit, helping Leti to finally seal Christina's — and white people's — magic forever.

It's a tragedy that undeniably binds Ji-Ah and the rest of his family together, which potentially sets the stage for a whole host of new relationships in Season 2.

What Happened to Dee's Arm?

Though Leti, Tic, Dora, and Hattie use magic to save Dee's life while in the ancestral plane, for whatever reason it fails to keep her arm from rotting. In the final moments of the show, Dee reveals that she had it amputated and in its place is a powerful mechanical arm, presumably built by Hippolyta. It's strong enough to finally kill Christina, but how Dee will use that arm in the future remains to be seen.

Beyond all of that, there are a few other mysteries. Why did Leti's invulnerability mark reappear, for example? And what was the significance of Tic's baptism? Whatever happens next, Lovecraft Country boldly ventured into practically every genre in its first season, and there are clearly enough threads leftover to keep people hooked until Season 2.

More like this
'The Last Of Us' Video Game Revealed Tess’ Fate In The HBO Series
By Brad Witter
'Succession' Season 4 Will Be An "Absolute Banger" According To Cousin Greg
By Bustle Staff
The 'Gossip Girl' Reboot Creator Is “Looking For A New Home” To Air A Potential Season 3
By Brad Witter
Here’s What Happens To Bill & Frank In 'The Last Of Us' Video Game
By Brad Witter
Get Even More From Bustle — Sign Up For The Newsletter
From hair trends to relationship advice, our daily newsletter has everything you need to sound like a person who’s on TikTok, even if you aren’t.