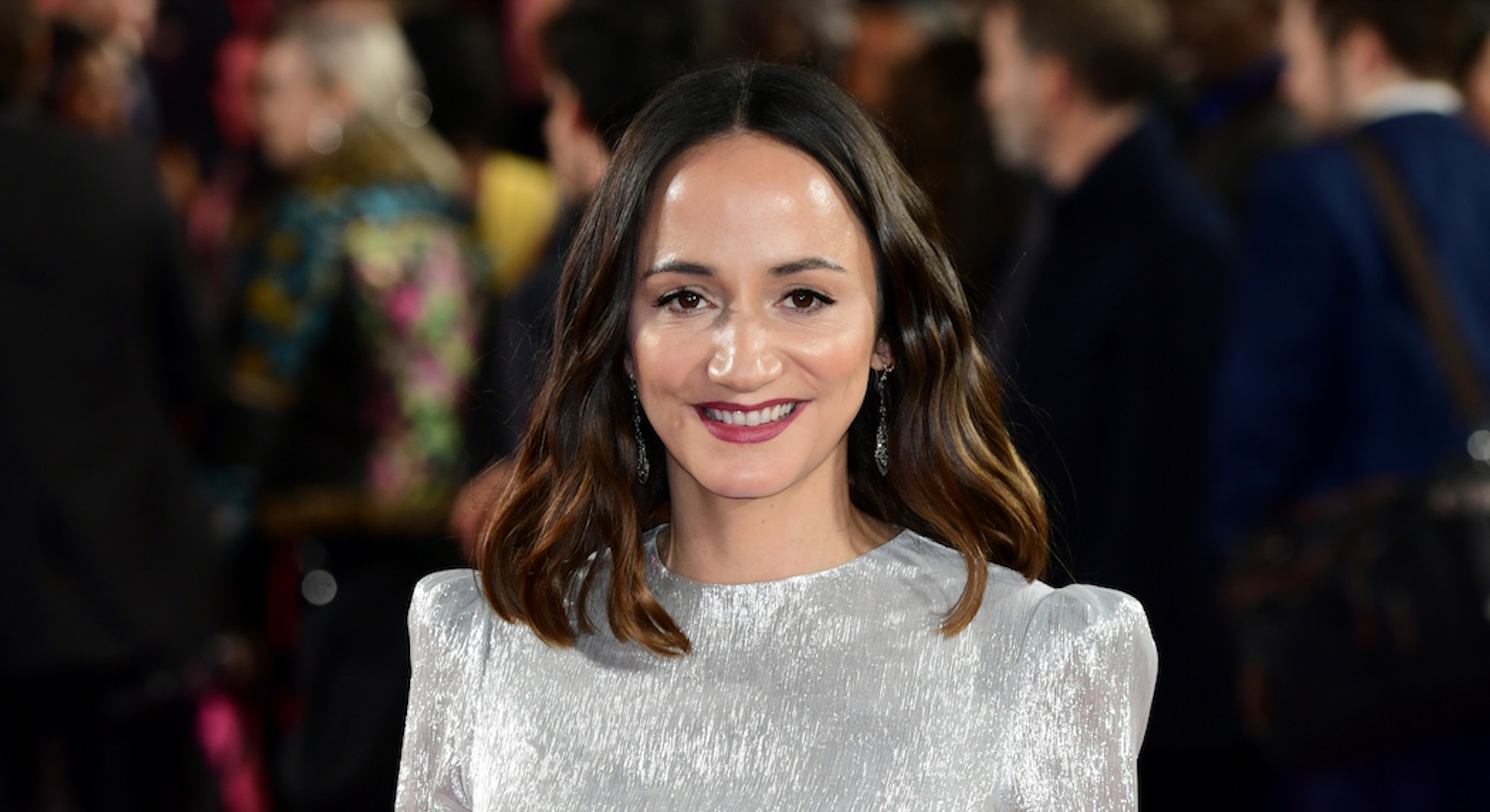 “That’s not a very good answer, is it?” Lydia Leonard asks, self-evaluating her response to one of my questions. Throughout our interview, she often trails off mid-sentence — not in a way that renders you impatient, but more so making you all the more eager to hear what she has to say. This is in stark contrast to her Ten Percent character: the no-nonsense talent agent Rebecca Fox, who tends to be abrupt and explicit in her address. “She doesn’t try to be liked. She’s not a people pleaser,” Leonard notes. “It’s great fun portraying such a hardcore bad*ss. Whenever you’re playing powerful people, you walk with a bit more confidence. You always take a bit of it back to your own life.”

Leonard, 40, has enjoyed a celebrated theatre career, with her performances earning praise from critics and audiences alike. In 2015, she was nominated for a Tony Award for her portrayal of Anne Boleyn in Wolf Hall: Parts One and Two. She has built a respected career for herself on the small screen, too, most recently capturing viewers’ attention in the BBC drama Gentleman Jack. Later this year, she’ll make her debut in The Crown’s fifth series, portraying public figure Cherie Blair, but more on that later.

The actor plays a lead role in Ten Percent, the British reboot of the hit French series Call My Agent!, which documents the exciting and fraught activity of a talent agency packed to the brim with high-profile clients from the acting world. The beauty of the series is that it takes viewers behind the masquerade and glamour of an, at times, cut-throat industry. In the British reimagining of the show, Paris is swapped for London, with the Nightingale Hart agency taking centre stage. The talent agents are thrown into turmoil when the owner of the agency dies, leaving the company in a precarious financial position. In an attempt to take control, one agent makes a deal with an American company, but this soon goes awry when the U.S. team sends one of its top people over to the London office to keep an eye on things. Amusing culture clashes ensue, especially when the American comrade schedules a team “mood meeting.” Horrified, Rebecca asks: “What the f*ck is a mood meeting, anyway?” With a bevy of big-name guest stars added to the mix, Ten Percent makes a determined effort to hold its own against the French series.

“I was terrified,” Leonard says of her apprehension to take the reins of a show with an established cult following. “I was more nervous doing this than I have been about any other job because of how brilliant the French series is.” The actor felt an added pressure knowing that her character is the British equivalent of Call My Agent! trailblazer Andréa Martel, portrayed by the formidable Camille Cottin. However, she was committed to making her character stand out in her own light, and stopped watching the original series as soon as she found out she’d been confirmed for the reboot. “Camille Cottin is brilliant as Andréa. But you need to find your own space and make it your own,” she reasons.

The Ten Percent agents are constantly on call: answering to the whims and demands of their A-list clientele. As such, Leonard has gained a newfound respect and empathy for agents. “They have to think on their feet and make decisions in the moment, and be totally convincing, as well,” she remarks. “If you’re talking to an actor who’s panicking about something, you can’t have them sense any fear, dishonesty or uncertainty, that would be the worst thing, so total calmness [is needed] in the moment.” Noting how interesting it has been to experience the other side of it, Leonard muses: “Half of the time, when I call up moaning about something, they [the agents] probably don’t even know what I’m talking about, because they have hundreds of other clients.”

It’s great fun portraying such a hardcore bad*ss. Whenever you’re playing powerful people, you walk with a bit more confidence. You always take a bit of it back to your own life.

Rebecca is the ideal candidate to deal with the fast-paced, unforgiving industry. She’s liberal with the F-word, remarkably self-assured (for the most part), and unapologetic about asking for what she wants. Rebecca’s phone is near-surgically attached to her hand, during both her work and play hours. Early on in the series, we see her mindlessly swiping through dating apps, looking for a short-lived romantic prospect for the night. Of the mundane portrait of modern dating, Leonard remarks: “It resonates [with me] in that it gives me the shivers… Rebecca has these intimacy issues, for want of a better term; it’s a transaction for her.” However, we soon see a different side to Rebecca when she embarks on a relationship with war correspondent Margaux Martorana (Eléonore Arnaud). It was a story arc that Leonard particularly enjoyed exploring. “Rebecca’s very loving and passionate. I think her relationship with Margaux is really sexy and believable,” the actor remarks.

Rivalling the French series, Ten Percent goes hell for leather with its celebrity cameos. Kelly Macdonald, Dominic West, Emma Corrin, Helena Bonham Carter, and Phoebe Dynevor are just some of the respected actors to make guest star appearances. “They all came with such brilliant energy,” Leonard recalls. “They’re used to being the protagonist of whatever they’re in, but we’re following the agents’ story here, so [the guest stars] had to join us with a huge dollop of trust.” Was there a particular cameo that stood out for her, I ask. “Helena Bonham Carter was magic. I loved her,” the actor tells me, excitedly. “She’s been so famous for so long. She was the most down to earth, funniest, kindest… everything you’d hope for and more.”

In the series’ first episode, Kelly Macdonald loses out on a big role due to her age, and is then encouraged by a talent agent to undergo cosmetic surgery, in an effort to appear more youthful. In a 2017 interview, Leonard told a story about how she considered trying out for a role in a Ron Howard film when she was 24, only for her agent at the time to suggest that she didn’t have the bone structure to be considered for such a part. I ask Leonard if Maconald’s storyline reminded her of this instance. “My agent at the time said it in a joke-y way,” she clarifies. “I felt terrible afterwards [when the interview was published].” Revealing that comments about female actors’ appearances are commonplace, Leonard added: “That pressure does exist; those are the notes coming from producers. It absolutely does happen; it just hasn’t happened to me in the way that interview made it sound.”

As it happens, Leonard has noticed a stark improvement in how women are treated in the industry, although she recognises that there’s still a long way to go. “Compared to the attitudes when I started, there have been some really big, long-lasting changes,” the actor explains. “I remember being made aware that you had to ‘make it’ by the time you’re 25, or you can forget about those roles in your 30s and 40s. Now, of course, it’s completely changed, and the best roles in television are for women in their 40s and early 50s.”

Helena Bonham Carter was magic. I loved her. She’s been so famous for so long. She was the most down to earth, funniest, kindest… everything you’d hope for and more.

Another Ten Percent storyline sees guest stars Emma Corrin and Himesh Patel bring the production of their film to a halt when they’re unable to get through a romantic scene. Despite having an intimacy coach on set to talk them through the motions step-by-step, the pair awkwardly fumble their way through the intended passionate moment. It later transpires that the characters are unable to fake it in front of the cameras due to having a real-life attraction to one another. Rebecca is one of the agents on hand to deal with the debacle. In reality, Leonard — who worked closely with an intimacy coach on Gentleman Jack — could relate all too well to the uncomfortable nature of the scene.

“I’ve had to do very few sex scenes in my career, thank goodness, but they’re just very unpleasant. You’re very vulnerable” the actor admits. “Only recently has there been more attention to detail. [Before,] everyone was too embarrassed to talk about it properly.” Meanwhile, Leonard champions her experience on Gentleman Jack, where she portrays Mariana Lawton, the former (and returning) love interest of lead character Anne Lister, portrayed by Suranne Jones. “Those ones [intimate scenes] were so well-organised. Suranne’s such a brilliant pro. With two middle-aged women, it was very easy,” she reveals.

Gentleman Jack is based on the real-life diaries of Anne Lister, and Leonard welcomed the responsibility of portraying a character with a real history of their own, all while representing a queer love story. “I got a lovely letter from Mariana’s descendent, which was nice,” Leonard shares. “I’m really proud of the show. It’s such a privilege to be a part of, because it means a lot to so many people.” And Leonard’s next big role will see her step into the shoes of another real-life person, albeit a slightly more well known one. The actor will portray Cherie Blair, wife of former Labour Prime Minister Tony Blair, in the upcoming fifth season of The Crown.

“It was a joy being a small cog in that big machine,” Leonard tells me. On the pressure of portraying a real-life public figure, she muses: “There is always a responsibility to capture them accurately but, to be honest, there’s a refreshing simplicity, too. It cuts out a whole load of choices and gives you somewhere to start. Of course, there is plenty of footage available in this case.” And while it may be daunting to portray someone who is so well known to the British public, the actor credits the behind-the-scenes crew in helping her refine The Crown’s interpretation of Mrs. Blair. “The hair and makeup teams, who are the best in the world, did more than half the work in terms of creating the character,” she concludes.