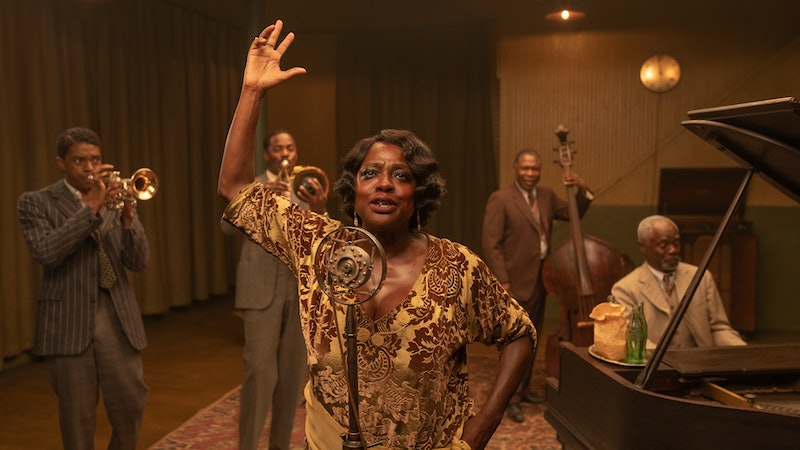 Awards season is officially here. And with cinemas still mostly closed around the country, more attention than ever is being paid to the prestige offerings of streaming networks. That of course includes Netflix, which is releasing Oscar-hopeful Ma Rainey's Black Bottom on Dec. 18. The film, which is based on the play of the same name by legendary playwright August Wilson, sees Viola Davis portraying the titular "Mother of the Blues" and the late Chadwick Boseman playing her ambitious horn player Levee as tensions build over the course of a 1927 recording session. The story is a work of fiction, but its eponymous protagonist was very real. So, who was Ma Rainey?

Born Gertrude Pridgett in Columbus, GA on Apr. 26, 1886, the woman who would eventually become known as Ma Rainey was a legendary blues singer. Nicknamed the "Mother of the Blues," Rainey is considered by many as the "first great professional blues vocalist," according to the Encyclopedia Britannica, and is credited with helping to develop and popularize the then-new musical genre. She began performing as a child prior to her marriage to William "Pa" Rainey, with whom she later toured as a part of minstrel shows and vaudeville acts until their split in 1916, according to Biography.com. At that point, Rainey began touring with her own band as she shifted her focus more toward blues music. By the 1920s, Rainey's touring blues shows had become immensely popular, and they made her one of the best-known musical celebrities of the decade. She toured throughout the American South, according to Oxford Music Online, and gained a large following in the region. Beginning in 1923, Rainey also began a recording contract with Paramount, and she recorded close to 100 songs over the next five years. These tracks make up the only recordings of her music that exist today.

In addition to her considerable musical talent, Rainey is also remembered for her professionalism and business acumen when it came to the less-glamorous side of show business. "Ma Rainey was a shrewd businesswoman. We never tried to put any swindles on her," record producer May Williams once said of her, according to Biography.com. As musical tastes changed in the 1930s, Rainey's popularity waned until she retired from performing in 1935. By then, she owned several theaters, which she continued to run until she died of a heart attack on Dec. 22, 1939.

As it's been roughly a century since Ma Rainey reached the peak of her fame, memories of the singer's greatness and impact have begun to fade. But with Ma Rainey's Black Bottom bringing more attention to the "Mother of the Blues," hopefully the legacy of Ma Rainey will endure for at least another hundred years.

More like this
What’s New On Netflix: 'Bridget Jones’s Diary' & 'Monster-in-Law'
By Arya Roshanian
Here’s Everything Coming To & Leaving Netflix In August
By Jake Viswanath
Everything To Know About Netflix's Marilyn Monroe Movie 'Blonde' Starring Ana De Armas
By Grace Wehniainen
Let’s Talk About Dakota Johnson’s Hair In 'Persuasion'
By Morgan Leigh Davies
Get Even More From Bustle — Sign Up For The Newsletter