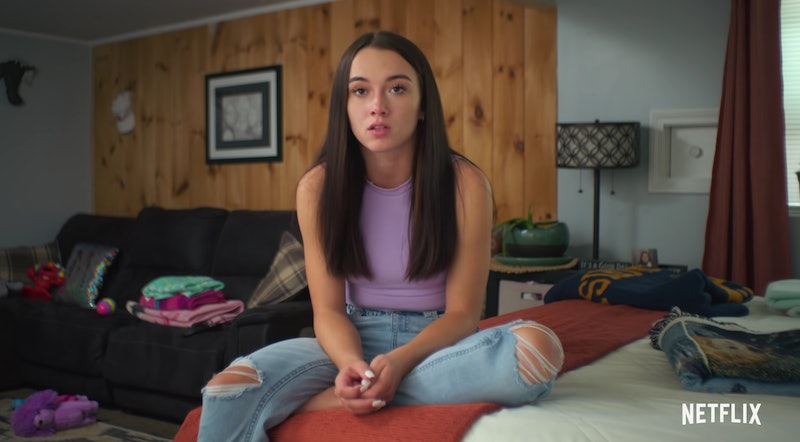 Season 2 of Netflix’s hit docuseries Cheer once again follows Navarro College’s cheerleading team — this time as they compete against their biggest rivals, Trinity Valley Community College. That means in addition to returning cast members like La'Darius Marshall, Lexi Brumback, and Morgan Simianer, there’s a whole new team of faces to get to know from TVCC. But they’re not alone: there are also a few new competitors on Navarro’s squad.

One of these people is Maddy Brum, who joined the team when she started school at Navarro in fall 2019. In fact, she actually made a brief appearance in Cheer Season 1 when she decided to commit to Navarro during her campus visit. The NCA National Championships were canceled during Maddy’s first year on the squad due to the coronavirus pandemic, but she was able to compete at the national championships in Dallas in 2021. Here’s everything else to know about the new Cheer star.

Maddy grew up in Dracut, Massachusetts and has been cheerleading since she was 7 years old. Prior to being recruited to Navarro, she won four state championships as a member of the Dracut High School cheer team. Scott Rigoli, her high school coach, told their hometown newspaper The Lowell Sun that Maddy has been talented and tenacious since she first started cheering. “She literally was fearless. She would just go on the mat in front of the whole team and just do her skills,” Rigoli said. “That’s how we knew that she was going to be something when she got older.”

Maddy regularly posts on her Instagram page @maddybrum, where she has 57,000 followers as of publication. Unsurprisingly, most of her posts have to do with cheerleading: She often shares photos of her and her teammates cheering as well as videos of her practicing new skills. Even the posts that don’t feature Maddy in a cheerleading uniform or on a mat are still related to cheerleading, as many of her closest friends are fellow cheerleaders and teammates.

As a cheerleader, Maddy is a flyer, which means she’s often the person being lifted and thrown up in the air during stunts — and as the plethora of videos on her Instagram page illustrate, she’s seriously talented. However, after spending over two years as a member of the Navarro cheerleading team, Maddy recently left the team and is now a member of the Wildcats, a Cheer Athletics All-Star team.

“Had my last ever Navarro football game today,” Maddy wrote in an Instagram post on Nov. 6, 2021. “I’ll miss my times at tiger field, go bulldogs always🐶”