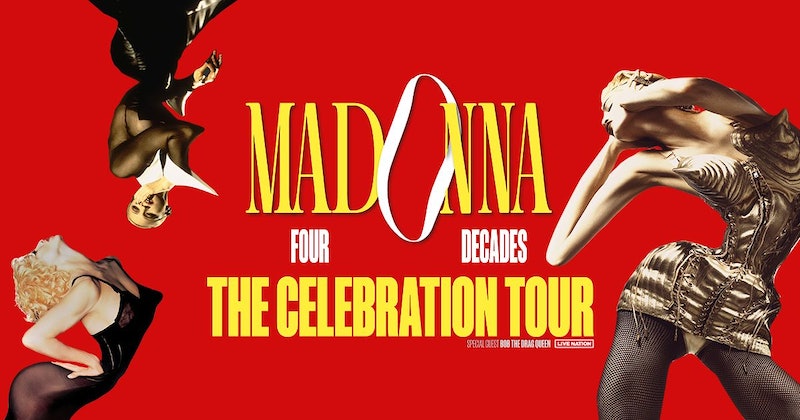 Taylor Swift’s Eras Tour isn’t the only greatest hits tour you’ll have to spend money on this year. On Jan. 17, Madonna announced she would be hitting the road for The Celebration Tour, her first greatest hits outing, to celebrate her 40th anniversary as the Queen of Pop. The tour will mark Madge’s first major trek since 2015 and first tour overall since her Madame X Tour in 2019 (during which she performed only in small theaters).

On The Celebration Tour, Madonna promises to perform hits from her four decades as an artist, from the ’80s cheer of “Holiday” to more recent hits like “Medellín.” “I am excited to explore as many songs as possible in hopes to give my fans the show they have been waiting for,” Madonna said in a statement. The singer will have a tough time condensing 40 years of hits into one setlist, but if the new tour teaser video is any indication, then classics like “Like A Virgin,” “Open Your Heart,” and “La Isla Bonita” are sure to be included.

The tour will kick off in July and hit 35 cities across North America and Europe through December. Presale began on Jan. 17, but demand has been so huge that Madonna has added 14 new dates to the schedule ahead of the planned general ticket sales. Bob the Drag Queen — the winner of RuPual’s Drag Race Season 8 and co-host of HBO’s We’re Here — will open for all dates of the tour. Read on for everything you need to know about The Celebration Tour.

The Celebration Tour will kick off on July 15 in Vancouver, Canada, and take Madonna to 35 cities across North America and Europe, culminating on Dec. 1 in Amsterdam.

To announce the tour, Madonna enlisted A-list stars and friends — including Amy Schumer, Judd Apatow, Jack Black, Lil Wayne, Diplo, Kate Berlant, Larry Owens, Meg Stalter, Eric Andre, and tour opener Bob the Drag Queen — for a very rowdy dinner party. The singer played a game of Truth or Dare, in honor of her 1992 documentary, during which she made out with Black and had Diplo stick his privates in a margarita, among other typical Monday night antics.

The video ends with Schumer, who opened for Madonna’s 2015 Rebel Heart Tour shows in New York, daring her to “do a world tour and play your greatest motherf*cking hits.” Naturally, after her guests promised to attend, Madge responded with a “F*ck yeah.”

Tickets for Madonna’s Celebration Tour will go on sale on Jan. 20 and Jan. 27 at 10 a.m. local time, depending on the city. For all U.S. shows, Citi cardholders will have access to a special presale that begins on either Jan. 17, for shows that go on sale Jan. 20, or Jan. 24, for shows that go on sale on Jan. 27. Fans who have a legacy membership to Madonna’s former Icon fan club, meaning those who were members all the way back in 2006, also have their own dedicated presale that will begin even before the Citi presales. VIP packages will also be available, which include top-tier seats, a Madonna-themed pre-party, and a backstage tour of the entire production.

More like this
Lewis Capaldi Is “Really Sorry” After Pre-Sale Ticket Fiasco Guts Fans
By El Hunt
"Lavender Haze" Star Laith Ashley Breaks Down Filming With Taylor Swift
By Jake Viswanath
Cruz Beckham Teased New Music With An Adorable Nod To Mom Victoria Beckham
By Stephanie Topacio Long
Twitter Is In Awe Of Taylor Swift’s “Lavender Haze” Music Video
By Jake Viswanath
Get Even More From Bustle — Sign Up For The Newsletter
From hair trends to relationship advice, our daily newsletter has everything you need to sound like a person who’s on TikTok, even if you aren’t.

This article was originally published on Jan. 17, 2023