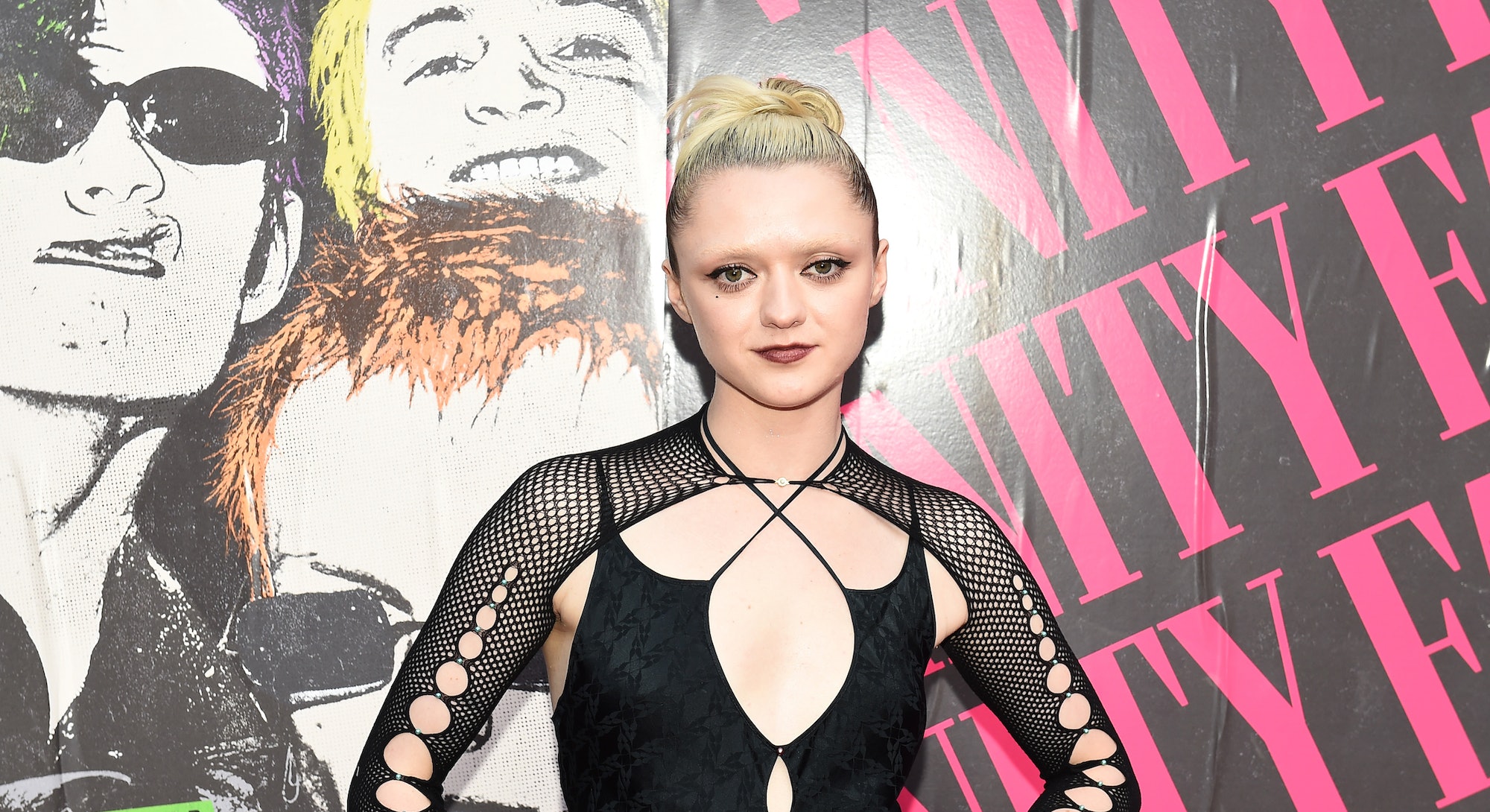 “It was really wonderful, and I just couldn’t believe it,” Maisie Williams tells me of her experience walking the red (or in this case, punk pink) carpet at the London premiere for Disney+ drama Pistol. “I didn’t know if I would ever get to do a premiere at Leicester Square. I’ve only ever been to premieres when it’s someone else’s, and I’ve just gone because, you know, it’s an opportunity to wear a nice outfit.”

Directed by Danny Boyle, Pistol details the rise and fall of the Sex Pistols, who were key players in the anarchy punk movement of the mid to late ‘70s. The six-part biopic is based on the autobiography of the band’s guitarist, Steve Jones, and features all manner of high-profile names. For Williams, the filming process turned out to be a musical and cultural education: one that impacted her life far beyond the small screen, but more on that later.

A few short weeks ago, Williams, 25, bumped into newlyweds Travis Barker and Kourtney Kardashian at the Met Gala in New York. When she told them of the upcoming series, the couple — who previously dressed up as Sex Pistols member Sid Vicious and his girlfriend Nancy Spungen for Halloween — told her they couldn’t wait to watch the show. Unsurprisingly, celebrities commenting on her work is not a new experience for the actor. In 2011, at the age of 14, the Bristol native made her on-screen debut on Game of Thrones as Arya Stark, a role she portrayed through all eight seasons of the critically-acclaimed series.

During the height of the fantasy drama’s popularity, Williams remembers famous faces approaching her at events and such, telling her how much they enjoyed the show. Admitting she often couldn’t place the celebrities, Williams notes: “My mum would be like, ‘Maisie, you must know who this is?’ but I didn’t really remember them.” However, there is one name from that frenzied time that she is able to recall. “I met Reggie Yates once and he was like, ‘I love the show.’ I remember being like, ‘That’s so cool.’ I was only like 13 or 14.” Of the whirlwind period she encountered during her experience filming Game of Thrones, Williams tells me: “That time of my life feels quite long ago. Lockdown was so long. My image has changed so much.”

As it happens, much of the actor’s most recent image transformation has to do with her portrayal of Pamela “Jordan” Rooke in Pistol. Jordan was a key figure in the fashion scene in London during the 1970s. She worked at Vivienne Westwood’s clothing store SEX, and found herself front row for many of the Sex Pistols’ early gigs. Jordan had an incredibly distinctive look, sporting peroxide blonde locks, styled to stand atop her head, along with geometric eye makeup. And that was subtle in comparison to her favoured clothing style, as she’d often wear see-through tops, with nothing underneath. This was a wardrobe choice that Williams confidently embraced long before securing the role, opting to wear a sheer top for her Zoom audition with director Danny Boyle. “It was the first Zoom audition I had ever done, actually. It went really well,” she recalls, proudly. “He was amazing. Even just to be able to audition in front of him, I was buzzing. And then I ended up getting the part, and I actually got to work with him, which is just a dream come true.”

During the ‘70s, Jordan was known to cause a commotion when travelling from East Sussex to London on the train for work. On one occasion, she was moved to the first class carriage, where she could sit alone, as her attire — a see-through top, worn with nothing underneath — had garnered complaints from fellow travellers. This exact instance is recreated in the opening sequence of Pistol’s second episode. Williams wears a yellow PVC top, paired with black pants and suspenders as she cycles to the train station ahead of journeying to work. “I certainly turned heads and commanded a lot of attention,” Williams tells me. “I made a lot of people feel very small. It was really rare to be in a position of such power, and it was completely down to the look.” While the prospect of filming the scene was admittedly daunting, Williams welcomed the challenge. “On the one hand, you could think that you’re riding the bike topless in a public setting and there’s the potential of being papped,” she muses. “But I didn’t really feel like a victim to that. I kind of felt very in control of it all.”

Upon arriving at SEX, Jordan has a discussion with Steve Jones (Toby Wallace), who is just as intrigued as he is perplexed by her travel-to-work attire. Revealing her wardrobe choice is a political one, Jordan informs her new pal: “This is a vulva-powered revolution.” To which he delivers the dim-witted response: “Why take the train if you’ve got a Volvo?” It’s an amusing, yet telling, encounter, brilliantly executed by both actors. When it came to portraying Jordan’s fashion and personality, Williams was able to go directly to the source for advice, as her namesake served as a consultant on the show. “Originally, I was quite intimidated by the situation. There is a pressure when you’re playing a real person,” the actor admits. “But, for me, there was only one person who I really wanted to care about this, and that was Jordan.”

I made a lot of people feel very small. It was really rare to be in a position of such power, and it was completely down to the look.

Revealing she had plenty of one-on-one time with the pop culture figure, Williams shares: “Jordan gave her notes frequently on the makeup, hair, and costume to make sure it was perfect. She certainly knew her face, her image, and how she wanted to be portrayed. Having her there with us meant we never got it wrong, which is quite rare.” Sadly, Jordan died of cancer in April, just a few weeks shy of the series' big premiere. As such, the second episode is dedicated to her memory. “She was such an integral part of this story and movement. I felt very lucky to have spent even just the smallest amount of time with her,” Williams remarks.

Pistol was made when social distancing restrictions were still largely at play in the UK, and this made the filming process all the more intense for Williams. Likening the behind-the-scenes experience to “group therapy,” the actor remarks: “It was the first time in a long time that we were able to spend any time with strangers… it made us [the cast] bond in a way that was quite unique in comparison to other projects that I’ve done.” And the actor also welcomed the opportunity to visit an era where face-to-face conversations prevailed. “It was really nice to step away from my phone for a long time,” she admits.

The series places much emphasis on the gigs the Sex Pistols played as they were trying to establish themselves. Williams, who had little knowledge of the band’s music or the scene they inhabited prior to joining the show, immensely enjoyed the on-set performances. “Shooting Pistol made me really fall in love with the more intimate dive bars for watching live music. I’ve never experienced that before,” she explains. “Even though it wasn’t the real Sex Pistols and it was a TV set, there were elements of it that felt really electric. That’s what I’ll be hunting out from now on, those more intimate and high octane performances.”

For Williams, every day on set was like “the most exciting party to be had.” In reality, the city lifestyle is a far cry from how the actor now lives. Williams left London in early 2021 and, along with her boyfriend Reuben Selby, moved to quieter dwellings in South-West England, where she was born and raised. Of heading back to her nest after filming, Williams tells me: “I was very happy to return to my home outside of London every evening. It felt needed, almost, after the mayhem.”

Williams has walked away from Pistol with a life-changing new perspective and a unique understanding on the influence of fashion. And it’s all thanks to one woman. “I felt very inspired by Jordan. Particularly in the way I’ve conducted myself since spending time with her and working on the show. There’s a lot of power in the way she looked,” the actor notes. “I have since found myself more immersed in the art of fashion as a political statement or a tool to achieve something.” Williams has felt the impact of this both on and off the screen. ”I think there’s many ways that your look as an actor can help or hinder the future of your career, so I’ve found myself exploring a lot of different things with my own image,” she reveals.

As Williams looks to the future, she still holds a lot of affection for the role that changed her life. As such, she’s returning as Arya Stark once more, albeit in a slightly different form. The actor voices the character in the upcoming video game MultiVersus. “It’s not really something I expected to come from all this. I’m thrilled,” she remarks. “It was so bizarre to be Arya again. It’s exactly the kind of video game that I love to play, so I can’t wait to play it as Arya. That’ll be cool.”

In terms of what’s next for Williams, it just so happens that her fashion evolution is set to continue, as she portrays the role of Catherine Dior, sister of the world-renowned French designer Christian Dior, in Apple TV’s upcoming thriller The New Look. Often referred to as Miss Dior, Catherine was a prominent figure in her own right, having served as a member of the French resistance during World War II.

“We’re filming in Paris and I’ve been loving it so far. It’s such an honour to play Catherine,” Maisie remarks. “The Dior fashion house has been incredible in letting us dive into their archives. Again, it’s one of those projects where there’s so much material for us to explore.” So, how is the French accent coming along, I ask? “Who says there's going to be an accent?” Williams teases, with a dry laugh. While she can’t give too much away, Williams keenly shares how this new role, along with that of Jordan, is all part of a wider journey for her. Of the two characters, the actor remarks: “Worlds apart yet still equally parts of me.”