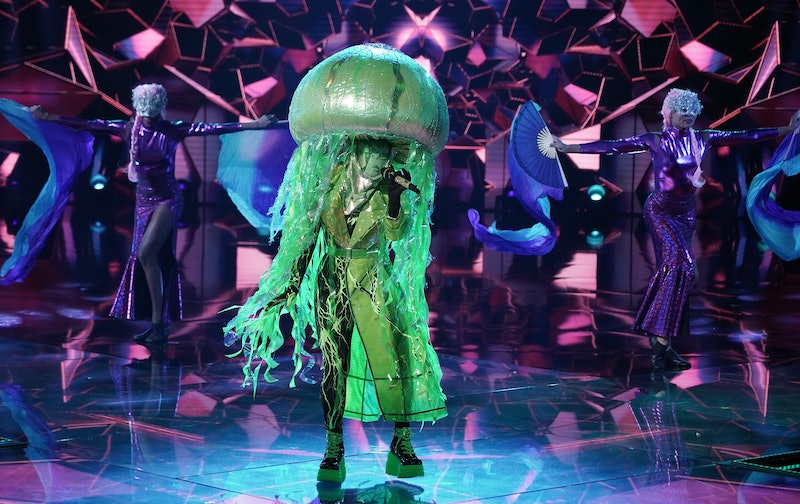 Now that Group C has performed twice on The Masked Singer, fans are convinced they've already figured out the identity of the electric Jellyfish. While Jellyfish's color scheme and stature initially led people to guess Billie Eilish, the current theory is that Jellyfish is Olympic snowboarder Chloe Kim.

At first, there were tons of hints that Eilish was hiding under the costume. Like the famous singer, Jellyfish wears black and electric green. The ocean theme in the clue package seemed to reference her breakout hit "Ocean Eyes," and there were "bad guy" lyrics in the background. The teaser also talked about "reigning supreme over an entire underwater kingdom," and Eilish started as an underground artist. In addition, there were references to flower crowns and Coachella, which she performed at in 2019. "There are SO MANY Billie Eilish clues," one Reddit user wrote. "It has to be her."

As exciting as it would be to have Eilish on the show, this person's stage presence and voice don't match up with the Grammy winning artist. Jellyfish was clearly nervous before she sang Fergie's "Big Girls Don't Cry" the first week. While she improved in the second week with her rendition of Patsy Cline's "Crazy," it seems impossible that Eilish would be nervous about singing — or have time to go on a weeks-long show at the height of her career.

Instead, fans now believe Jellyfish has to be the one Olympic medalist who was referenced at the beginning of the season. "There’s no Olympian in Group A or B and Squiggly and Broccoli are easy guesses, so unless Michael Phelps is singing under the Mushroom, Jellyfish is our Olympian," one Reddit user joked. While some guessed gymnast McKayla Maroney, the clues more closely line up with Kim. Kim is most known for becoming the youngest woman to win a snowboarding gold medal, which she achieved at the 2018 Olympics. In the first week, there was an "Instaclam" hint, and Kim has over 650,000 Instagram followers. She had a brief cameo in the new Charlie's Angels, which could explain the Angelfish in the clue package. Kim also loves Coachella, and the baby powder reference is likely a play on how athletes call fresh snow "powder."

In the second episode, her clue package mentioned how Papa Jellyfish had given up his career to help her achieve her dreams. During the Olympics, Kim's dad Jong Jin Kim told the Today show that he left his job to drive Chloe to all her competitions. "We — an immigrant like me — we always say, 'the American dream,'" he said, adding that his daughter is the embodiment of that for him.

Julie Fallo at ScreenRant picked up on even more nods to Kim. As Fallo noted, the cereal box clue could be referencing the time Kim featured on a Kellogg's Corn Flakes box. There was a boat in the second clue package labelled "USS Big Bird," and Kim appeared on Sesame Street. As for the 7:20 clock, that's likely a reference to the "Crippler 720" move that Kim pulled off during the Olympics.

Finally, Jellyfish herself said, "Brrr. I assure you that even though I may be cold-blooded, I have a warm and glowy flow with H2O." It's undeniable that Kim knows how to glide down the slopes like a champ. If that really is Kim under the Jellyfish mask, she seems to be getting more confident as the weeks pass. Who knows, Kim may soon be adding another trophy to her collection.

More like this
Every Celebrity From 'The Masked Singer' Season 8 Revealed Or Rumored So Far
By Gretchen Smail and Brad Witter
Devon Diep From 'Bling Empire' Wrote A Song About Her “Second Chance At Love”
By Grace Wehniainen
Andrew Gray Returned To 'Bling Empire' In Season 3 To Make Amends
By Brad Witter
The 'Love Is Blind' Season 3 Teaser & Release Date Are Here & The Cast Is "All In"
By Kadin Burnett, Grace Wehniainen and Gabrielle Bondi
Get Even More From Bustle — Sign Up For The Newsletter