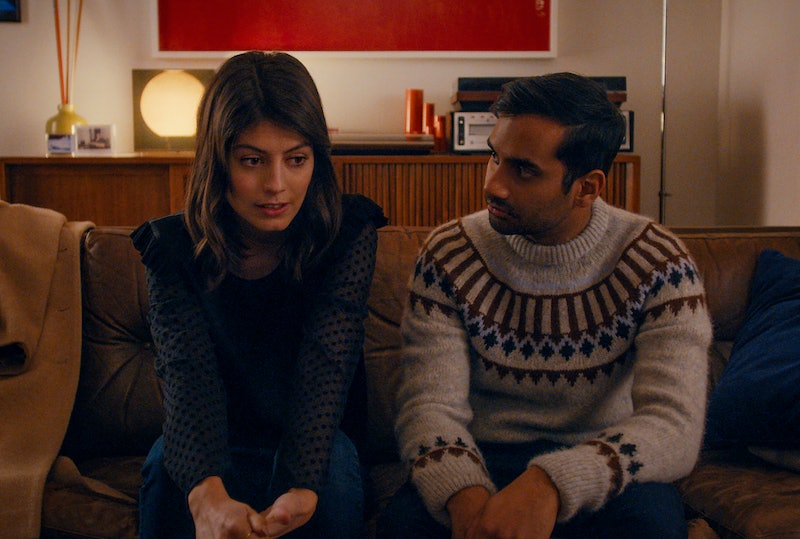 It’s been quite a while since viewers have seen the cast of Master of None — four years, to be exact. Now Season 3 is set to debut on May 23, but it will look and feel different from its predecessors. Rather than focusing on Dev (Aziz Ansari), Season 3 follows the story of Denise (Lena Waithe) and her partner Alicia (Naomi Ackie) as they navigate their new relationship and their struggles to conceive a child.

Originally, co-creators Ansari and Alan Yang were unsure that they’d ever return to the series at all after Season 2 ended. “If you look back at any of the old interviews Alan and I did in Season 2, I think we were both pretty clear we didn’t really want to do the show again if it was the same kind of show,” Ansari said during Deadline’s Contenders Television awards season event. “We kind of exhausted what we wanted to say about me being a guy in my 30s and single in New York and eating food and running around.”

The new season, titled “Moments in Love,” was co-written by Waithe and Ansari and was inspired by a friend who was a sperm donor for a lesbian couple. Season 3 marks a departure from the first two seasons, and ultimately Ansari only cameos (likely a way to distance him from the show in the wake of his 2018 sexual misconduct allegations). Still, it’s understandable if fans need a recap on Master of None Season 2 before diving in. Here’s everything important to remember.

Struggling actor Dev (Ansari) and Rachel’s (Noël Wells) relationship unraveled by the end of Season 1, culminating in them breaking up and her moving to Tokyo. Though still hung up on her, Dev hops on a plane to Italy for his own adventure. This is where Season 2 picks up. Dev has been living in Modena, Italy, for three months working at a pasta shop. He has a crush on his boss’ daughter, Francesca (Alessandra Mastronardi), but she’s already in love with someone else.

Dev continues to hang his hopes on Rachel, but a visit from his friend Arnold (Eric Wareheim) convinces him to stop texting her and come home. Dev says goodbye to Francesca, and when he arrives back in New York City he books a job hosting the baking competition show Clash of the Cupcakes. He meets the producer, celebrity Chef Jeff (Bobby Cannavale), who later tells him the network wants to sign Dev for a seven-season contract.

In keeping with the theme of Season 1, Dev dives back into the NYC dating scene, but all his dates fizzle out. His unlucky-in-love streak seems to change when Francesca arrives in New York with her boyfriend Pino (Riccardo Scamarcio) on a business trip. He takes her out (platonically) to a museum, and then they grab dinner and party with Jeff.

Dev falls in love with Francesca

After failing to secure a date for a dinner party, Dev ends up taking Francesca again. Their night is filmed like the perfect rom-com, full of banter and even accompanied by John Legend performing at the party. After saying goodbye, Dev realizes he’s fallen for Francesca. She’s already taken, though, and the next time he contacts her, he finds out she’s engaged to Pino.

A complete commitment-phobe, Dev ends up turning down the network’s offer to host Clash of the Cupcakes for seven seasons. Instead, he pitches a food travel show for him and Jeff titled BFF: Best Food Friends, where they would travel together and immerse themselves in different cultures.

The studio greenlights the project, but it quickly falls apart when Dev discovers several women on set were sexually harassed by Jeff. When Dev and Jeff go on Raven Live, a talk show hosted by Raven-Symoné, she confronts them about the allegations. Dev botches his statement, and ends up unintentionally condoning Jeff’s behavior. (Yes, this plot point has aged really poorly.)

Dev and Francesca end up on a series of dates that they claim aren’t dates. She vents about her fiancé, and they even take a helicopter tour over the city together. Dev eventually admits he loves her, and Francesca reveals she feels the same way.

The Season 2 finale has Dev run into Rachel in New York City again, but in a twist they part ways and Dev somehow ends up with Francesca. She decides not to go back home with Pino, and the season ends with her in bed beside Dev, sans her engagement ring.

What Happens To Denise In Master of None Season 2?

Meanwhile, Dev’s friend longtime Denise (Waithe) mostly appears in Season 2’s “Thanksgiving” episode. In it, we meet Denise at 12 years old, when she realizes she is attracted to women. Four years later, she comes out to Dev. In 2006, Denise comes out to her mom Catherine (Angela Bassett), who reacts poorly to the news. “It’s hard enough being a Black woman in this world, now you want to add something to it?” she demands. In 2015, Denise brings her girlfriend Michelle to Thanksgiving, which annoys Catherine. She then brings a different, more shallow girl the following year, and Catherine admits she misses Michelle. Finally, at Thanksgiving 2017, Denise returns with Michelle, and Catherine admits she’s happy to see them together.

Season 3 tells us that Denise ultimately doesn’t end up with Michelle, but “Thanksgiving” is a vital piece of backstory that sets the stage for who Denise is going forward.