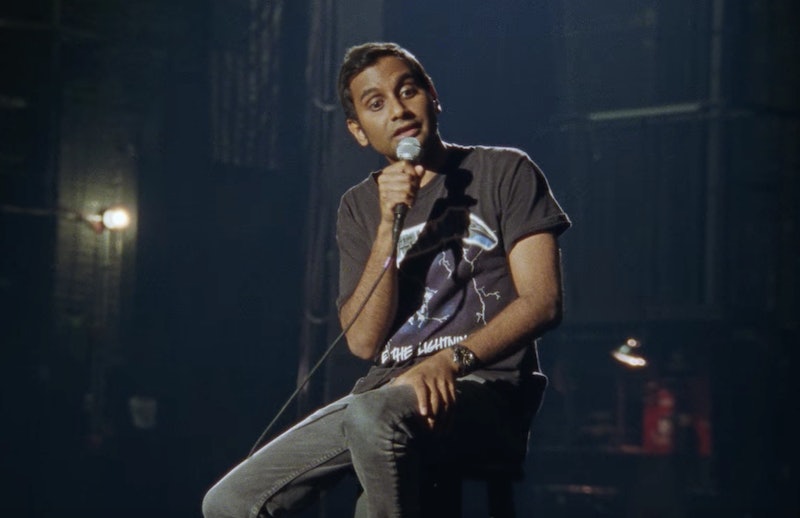 In his newly released Netflix special Right Now, Aziz Ansari wastes no time in addressing the sexual misconduct allegations made against him in 2018. In his initial response to the report — in which a 23-year-old photographer claimed to Babe.net that she felt coerced and pressured into engaging in sexual activities with him after a 2017 date — Ansari kept things short, confirming the woman's account but saying he thought the encounter was "completely consensual" and that "he took her words to heart and responded privately after taking the time to process what she had said." In Right Now, however, he addresses the accusations more candidly.

In the opening bit of the special, Ansari jokingly imitates a fan on the street who mistakenly recognizes him as fellow comedian Hasan Minhaj. Embarrassed at the mistake, the fan tries to backtrack by listing Ansari's actual projects — Master of None, Parks and Recreation, his "treat yo' self" catchphrase — to which Ansari nods and says "yeah, yeah, that's me." However, when the fan says, "And uh, you had that whole thing last year, sexual misconduct?" Ansari shoots back, "No, no, no, no, no. That was Hasan."

The audience laughs and applauds, but then Ansari gets serious, speaking in a hushed tone:

"You know, I haven't said much about that whole thing, but I've talked about it on this tour, 'cause you're here and it means a lot to me. And I'm sure some of you are curious how I feel about that whole situation. And, uh, it's a tricky thing for me to answer, 'cause I've felt so many things in the last year, so... There's times I felt scared. There's times I felt humiliated. There's times I felt embarrassed. And ultimately, I just felt terrible that this person felt this way. And after a year or so, I just hope it was a step forward. It moved things forward for me and made me think about a lot. I hope I've become a better person. And I always think about a conversation I had with one of my friends, where he was like, 'You know what, man? That whole thing made me think about every date I've ever been on.' And I thought, 'Wow. Well, that's pretty incredible.' It's made not just me, but other people be more thoughtful, and that's a good thing. And that's how I feel about it."

How you take that depends on your expectations. Some viewers were relieved Ansari didn't follow in the footsteps of Louis C.K., who admitted to multiple incidents of sexual misconduct only to later joke about sexual harassment onstage, but others still felt Ansari fell short. Particularly as a comedian known for his sharp, feminist commentary, some argued he could have used this as an opportunity to open up a wider conversation around consent and intent, rather than vaguely explaining how the situation made him feel. He does come across as genuinely contrite, but in the broader scope of the set, these remarks are a mere footnote.

The rest of the special is filled with Ansari's usual brand of humor, including reflections about how his comedy has grown and matured (for instance, he says he regrets fat-shaming his cousin Harris on a global scale). Ansari is at his best when he talks about family, dating, and race, and he hits strong when he discusses the micro-aggressions he faces when walking around with his white girlfriend, or how exhausting it is as a person of color to field white people's sudden wokeness. "Yeah, Candice. I am aware of it. I saw it 30 years ago," he quips about The Simpsons' controversial Apu character. "It's a white guy doing an Indian voice. I appreciate the support, but things don't just become racist when white people figure it out."

That he chooses to talk at length about R. Kelly and Michael Jackson — both of whom have faced very serious allegations of sexual abuse — feels like a misstep for a comedian making a comeback from a sexual misconduct accusation, considering he doesn't address his own role in the #MeToo movement with much depth. But overall, the theme of Right Now is one of reflection, and Ansari seems to be grappling with the idea of cancel culture, both as someone engaging in it and on the receiving end of it.

Ansari closes out the special with the same thoughtfulness he began it with, reaffirming how important it is to live in the moment. Ultimately, he seems most shaken by the fact that he almost lost his career, but it's clear he's had a lot of time to reflect in the past year — on his past jokes and actions, what he's learned, and how he'll apply that moving forward.

More like this
Everything We Know About Jerry Seinfeld's Pop-Tart Movie
By Radhika Menon
Julie Andrews Revealed A Surprising Behind-The-Scenes 'Bridgerton' Detail
By Grace Wehniainen
Who Is 'Umbrella Academy' Star Elliot Page Dating After His Divorce?
By Jake Viswanath
Move Over, 'Sunset'! The Drama-Filled Trailer For 'Selling The OC' Is Here
By Nola Ojomu
Get Even More From Bustle — Sign Up For The Newsletter