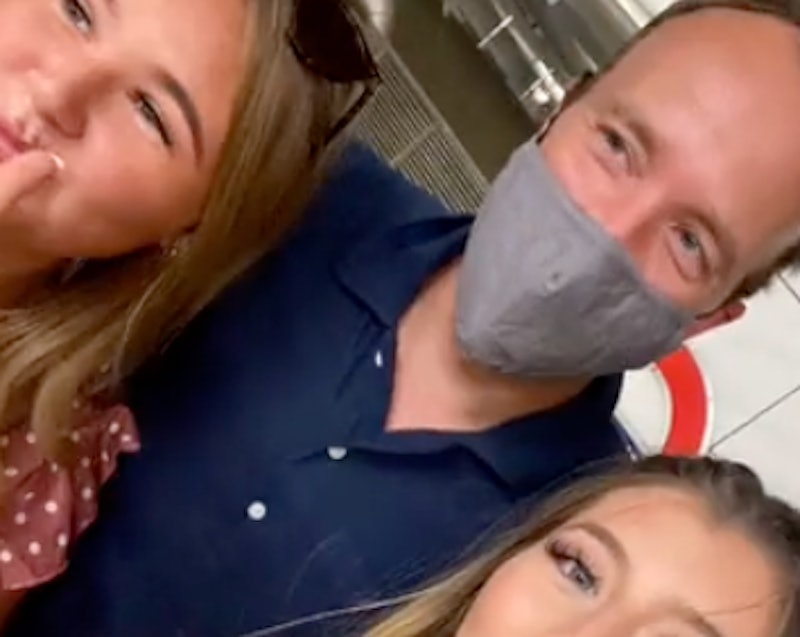 You may be forgiven for thinking you wouldn’t see much of Matt Hancock after the politician was forced to quit as Home Secretary after breaking Covid rules during his affair. While the former health secretary has seemingly tried to keep a low profile amidst the scandal, Matt Hancock became an unlikely TikTok star over the weekend after being spotted on the London Underground.

In TikTok footage taken on Saturday, August 14 Matt Hancock is seen being stopped by a group of lively young women on the London Underground station, who in their words, “chased” him.

The video, shared by a user named Georgia, sees the women completely fangirling the disgraced MP.

“So we chased this man thinking it was someone we knew and it turned out to Matt Hancock,” says the video.

“We had a good chat. We terrorised the poor man,” it went on to say, over a collection of photos.

In the series of clips, Matt Hancock, who was wearing a mask, a casual blue shirt and bright orange shorts, appeared to take the encounter in good humour, even when the women “stole his hat” from his head and passed it around for selfies.

“We stole his hat so thanks for that, Matty boy,” adds the video.

The women, who were clearly on a big night out, then proceeded to get the tube to singalong to rowdy chants of “we love you Matt, we do.”

The video ends with “The whole tube was singing, what a vibe you brought us Matt. You made our night.”

It’s safe to say, people have had mixed feelings about the encounter on social media, with one Twitter user tweeting that he was “fuming”.

“Seeing Matt Hancock on the tube on my fyp is so dystopian it’s so funny seeing him chase after his hat after ppl steal it,” tweeted one person.

The fun on the tube comes a few months after Matt Hancock was seen kissing his aide Gina Guadaglino on May 6, thus breaking his own regulations around COVID-19 restrictions.

Of course, it’s not the first time Matt Hancock became the trending topic of the day, as with many national scandals, Brits everywhere made hilarious memes about it.