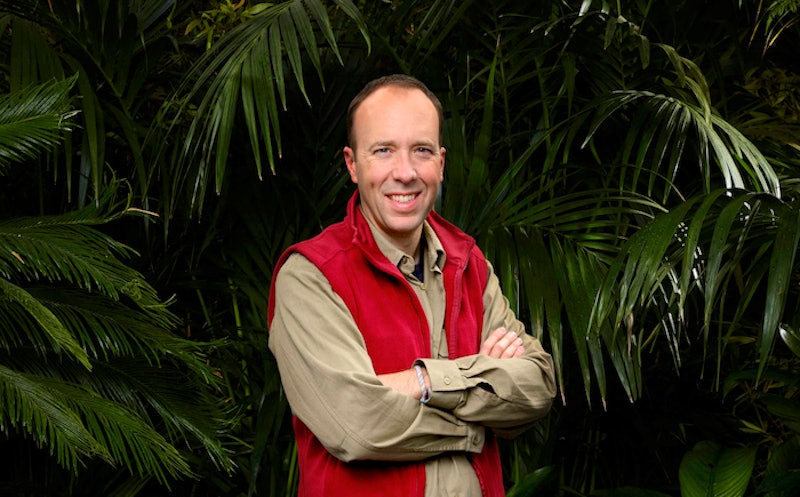 Another day, another rule break for Matt Hancock. An anti-corruption watchdog has said that the serving MP for West Suffolk, famously ousted from his post as as Health Secretary after breaking his own social distancing restrictions by having a workplace affair with aide and now-partner Gina Colangelo, broke government rules by taking part in I’m A Celebrity… Get Me Out of Here!

Rule-breaks are a frequent fixture in the reality show; last year, Coronation Street actor Simon Gregson was caught smuggling in contraband salt and pepper, while Royal Correspondent Jennie Bond famously hid lipstick in her boot way back in 2004. Hancock, however, managed the feat of breaking rules before even setting foot in the jungle.

Ex-ministers are required to seek advice from the Advisory Committee on Business Appointments for any new jobs they accept within two years of leaving office – something that Hancock did not do. “Failing to seek and await advice before these roles were announced or taken up in this case is a breach of the government's rules and the requirements set out in the ministerial code,” the body’s chairman Lord Pickles wrote in a letter to Cabinet Office Minister Oliver Dowden, reported the BBC, though he added that taking further action could be considered disproportionate.

The MP has already been suspended from the Conservative Party after announcing he would be appearing on the show, and his casting has proved controversial among both viewers at home and fellow contestants in the jungle.

“I can’t help but think he should be at work,” Chris Moyles told the Bush Telegraph upon Hancock’s entry to the show, while Boy George – whose mum was hospitalised during the pandemic – seemed tearful. “I don’t want to be sitting here like I’m having fun with him,” he said. Elsewhere, campaigners flew a banner urging him to leave the jungle.

Viewers at home were broadly disappointed in the decision to cast Hancock in the reality show, too. Best known for heading up healthcare at the beginning of lockdown, the MP was responsible for the decision to transfer elderly patients into care homes without testing, and faced accusations of favouring Tory donors and friends when it came to picking suppliers for lucrative PPE contracts. The High Court later found that Hancock acted unlawfully by failing to publish details of dozens of these contracts.

Elsewhere, the MP has also been accused of further rule-breaking as he bid farewell to Babatunde Aleshe on Nov. 23. After the comedian called Hancock “wonderful”, the MP replied "will you say that to Gina?” Many – including Good Morning Britain hosts Susanna Reid and Richard Arnold – speculated about whether he was attempting to send messages to the outside world.