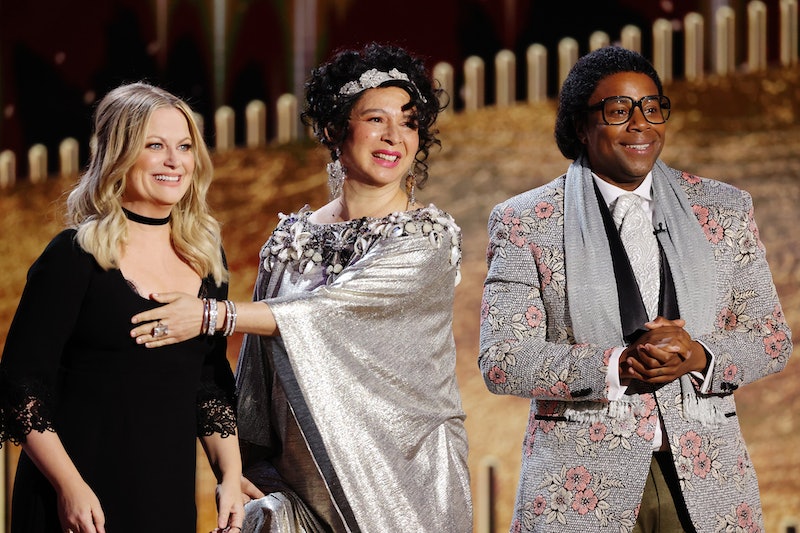 Not that the Golden Globes needed another awkward or chaotic moment — but co-host Amy Poehler obliged to give us one anyway, by way of a surprise appearance from her former Saturday Night Live colleagues Kenan Thompson and Maya Rudolph.

Following Aaron Sorkin's acceptance speech for Best Screenplay for Trial of the Chicago 7, Poehler promised the audience a "truly messy speech," before being joined onstage by Thompson and Rudolph as a married pair of sibling songwriters (yeah, it was as weird as it sounds).

Rudolph and Thompson played Beverly Jackfruit and Francois Jean-Rudy, respectively, who were accepting the award for “Least Original Song in a Telefilm - Dramedy or Comma.” And their speech truly lived up to those messy expectations, beginning with Thompson smooching Poehler and Rudolph (aka Jackfruit) greeting her SNL pal by saying, "You look so beautiful … so perky" and grazing Poehler's chest.

She continued with other choice quotes like "Thank you, Tina" and "Bear with me, I had a vodka epidural before I came here."

In character, Rudolph and Thompson claimed that they also wrote the theme song to The Crown — their version, though, was "used exclusively in Netflix Germany" and its lyrics simply included "The Crown" over and over.

"You're taking so much time with this and you're making everyone nervous," Poehler said. "I love it so much."

Thompson wrapped up the speech in something that sounded kind of like French, for which his partner translated: "He would like everyone to know that he thinks COVID-19 is a hoax... and that space lasers control the weather... also he is asking me for a divorce."

So all in all, a truly bizarre premise — but a fun surprise to see some of our favorite faces from SNL together again.

More like this
Kenan Thompson Pointed Out A Super True Detail About 'Friends' In His Emmys Monologue
By Grace Wehniainen
Kenan & Kel Just Reunited At The 2022 Emmys & Twitter Is Overjoyed
By Grace Wehniainen
Jinkx Monsoon Is About To Get Real Sketchy
By Sam Ramsden
What’s New On Netflix: Ana De Armas’ 'Blonde' & A Nick Kroll Special
By Arya Roshanian
Get Even More From Bustle — Sign Up For The Newsletter

This article was originally published on March 1, 2021