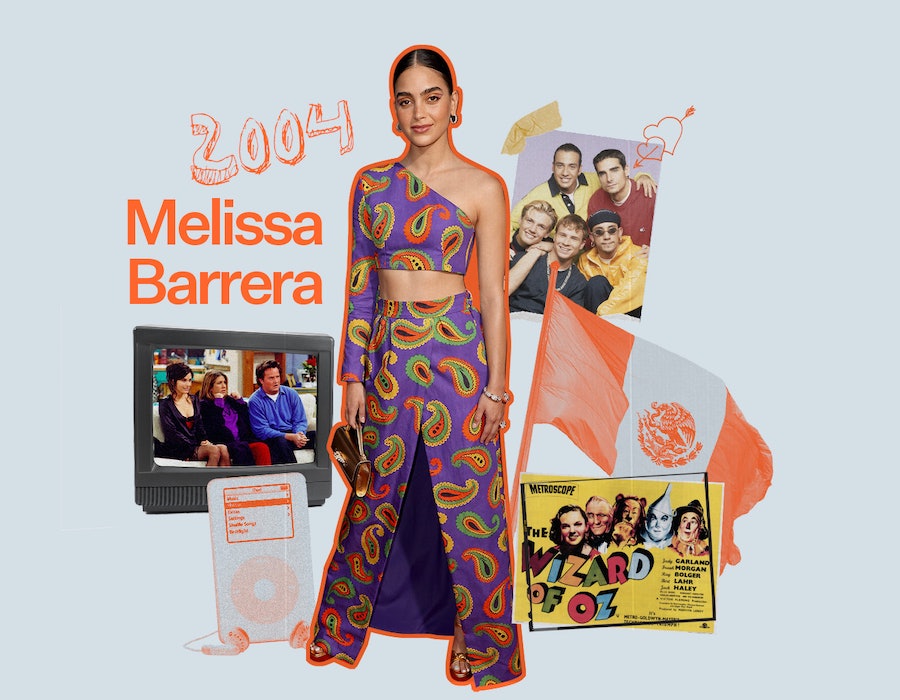 When Melissa Barrera was 14, she was trying to get out of having a quinceañera. “It was just an unnecessary party,” Barrera tells Bustle over Zoom. “But my grandma really wanted us to have one.” In spite of her protests, the In The Heights star, who was born and raised in Monterrey, Mexico, couldn’t escape the centuries-old Mexican tradition in which girls celebrate their 15th birthday with an elaborate party complete with colorful gowns, choreographed dancing, and a court of damas and chambelanes.

Looking back, Barrera, 32, is happy she had the party after all, though she still wonders why her 14-year-old self chose that dress. “It was like a mermaid, where the dress is super tight and then at the bottom it comes out like a mermaid tail,” she explains. It didn’t help that the color was what she describes as “beige-y” with green beading. “It was the most boring color that I could have chosen. I don't know why I did that. Still to this day, I regret it.”

Quinceañeras and fashion faux pas aside, 14 was a life-changing age for the actor. She discovered her passion for theater after landing a role in her first school musical and realized it might be her calling. “I fell in love with theater so hard and so fast that I was like, ‘Oh, my God, this is incredible. These people are amazing. I love being on stage. I love rehearsal. I want to do this for the rest of my life.’”

Barrera would go on to study musical theater at New York University, but it would take a few more years before she could embrace her passion for musicals onscreen in 2021's In The Heights. After acting in telenovelas and breaking through stateside in the Starz family drama Vida, landing the role of Vanessa in In The Heights was a full-circle moment for the star. “I am that character,” she told The Cut. “This idea of a woman who wants to get out of her neighborhood or her small town and pursue her dream somewhere else was something that I wanted to do.”

With drama and musicals under her belt, 2022 saw Barrera dive into horror in the Scream reboot; she'll next star in the Netflix limited series Keep Breathing, in which she plays Liv, a woman stranded in the Canadian wilderness after a plane crash. Liv’s struggle to survive is as much mental as it is physical, with Barrera’s character often reflecting on her past to push forward in the present. It’s a new kind of dramatic role for the actor, ushering in the next phase of Barrera’s dynamic career that she began imagining for herself at 14.

Below, Barrera talks about being too busy to have a rebellious phase, her favorite boy band, and what items would be in her 14-year-old self’s survival kit.

I was in eighth grade, and I was starting to get the courage to audition for musical theater. And I did my first show, which was The Wizard of Oz, in school. It was a big year for me, actually, because my love for musical theater started.

Who did you play in The Wizard of Oz?

I played Tree #3. I was in the ensemble; I played a munchkin as well as a guard of the witch. But my featured role was Tree #3, because I had one line and I got to throw apples at Dorothy and the Scarecrow and the Tin Man.

What were your biggest hopes and worries at the time?

My biggest hopes and worries were being liked back by the boy that I liked. The drama of the moment was like, “Oooh, boys,” and that was it. It is very nice to think that was my biggest worry.

14 can also be a delicate time for a girl. Do you remember how you were feeling about your body at 14? Did you feel comfortable in your own skin?

Sometimes yes, but sometimes no. Everyone was getting their first periods at that time. For some reason, it was shameful because, in Mexico especially, you don't talk about it — like no one should know when you get your first period. You don't even want your friends to know. And everyone's learning about pads and no one was using tampons yet. It was a very stressful anxiety-producing time of life where everyone's trying to hide that your body's changing.

That's interesting, especially because you're also getting ready for your quinceañera, where traditionally you're coming out as a woman, right?

It's weird to think about it that way because for me my quinceañera was not me coming out to society as a woman. I was like, “Why is this necessary? Can I just have a trip? Can you give me the money and can I buy myself something?” But it means a lot to a lot of people and means a lot to the women in my family. So I ended up having it, and I'm glad that I did because it was a super fun party. Then my sisters all had their own quinceañeras.

What was your relationship with your sisters like at the time?

We would pull each other's hair out. It was bad. We were fighting over clothes, shoes, and mostly jealousy of, “Why does she get to go to this person's house?” I feel like that happens when there are four girls in a household. It was drama all the time, but we also had a lot of fun. When we would go on trips by ourselves, we would laugh so much. There was always someone to talk to, someone to watch a movie or play Rock Band with, or go outside and play with chalk.

What were you getting in trouble for at 14?

At 14, I wasn't getting in trouble for anything. Because my younger sisters were so much more rebellious than me, anything that I did was tame compared to them. I remember, even when I started drinking at 17-18, I could get away with everything. I would be home late, and my mom wouldn't even think anything of it because I was so responsible and respected curfew. I was never going out to clubs or anything like that. I was a homebody, and I liked hanging out with my friends at home or at the park. I was also very active. I always had activities going on, so I didn't have time to be a rebel.

Keep Breathing is all about survival. What would be in your 14-year-old self’s survival kit? What couldn't you live without?

I'd have my iPod; I couldn't be anywhere without an MP3 player with my musical theater soundtracks. I would have a Bath and Body Works hand sanitizing cream, which was huge at the time. Everyone had one; all the smells in the classrooms were so strong. I would have a bag of chips because I've always been a chip-crazy person — I'm obsessed still to this day. Pads, clearly. Probably a notebook? Yeah, a notebook and a pen.

Which musical soundtracks were on repeat for you?

I had Les Mis and Beauty and the Beast on repeat. Rent. Those are the three that were on cycle in my car.

Did you have any big celebrity crushes at the time?

If it was post High School Musical, I was obsessed with Zac Efron for the next few years, but if it was before, there were the Disney Channel hunks and Backstreet Boys, NSYNC, Westlife. I loved boy bands.

Who was your favorite boy band?

Did you ever get to see them in concert?

I just saw them in their Las Vegas residency. During my honeymoon, my husband and I were in Vegas for a few days, and we went. It was the best concert of our lives because he's also a fan. We're on our feet the entire time singing every song. They were doing playback for most of it, but it didn't matter because the production was incredible. It was mind-blowing.

I would hope that she thinks I'm really cool and that we have a great life. I would hope that she's surprised but also satisfied. She'd be like, “You're doing movies in Hollywood. That's awesome. You got to work with Courteney Cox!” I was obsessed with Friends, so she would be proud.

Is there any advice you would give your 14-year-old self based on what she's going through at the time?

Don't be afraid to take more risks. At that time of my life, I was very insecure about a lot of things that were going on. When I was a kid, I was super bold and unafraid. And then slowly, I started losing that. And 14, 15, 16 was probably the peak time when I was super insecure. And so I would say to trust yourself. Don't be afraid to go for the things that you want.

More like this
At 28, Tisha Campbell Was Newly Married & Dancing Through A Career Pivot
By Grace Wehniainen
In Rap Sh!t, Social Media Has Main Character Energy
By Aramide Tinubu
At 14, Rachel Sennott Had A Sexual Awakening While Reading 'Twilight'
By Samantha Leach
How Director Quinn Shephard Turned Dylan O’Brien Into A “Viral Weed Blogger”
By Samantha Leach
Get Even More From Bustle — Sign Up For The Newsletter