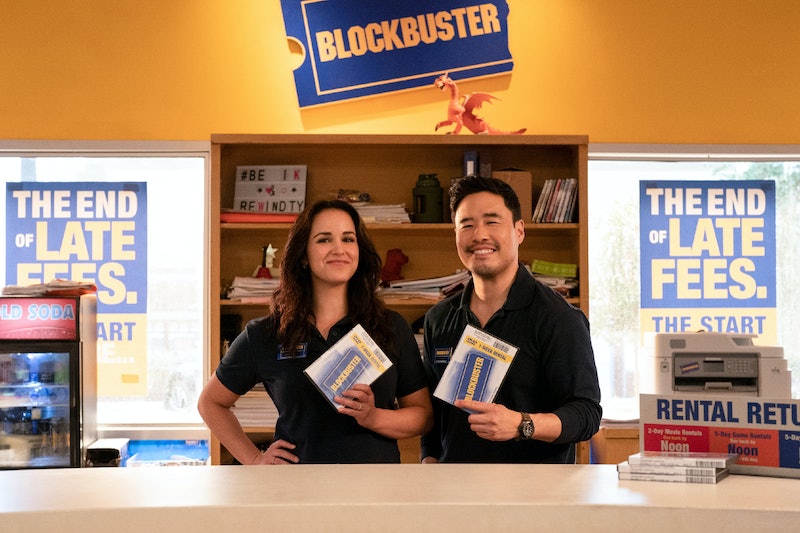 Thanks to Netflix, the days of video stores like Blockbuster are all but gone — or at least they were. Come November, users will be able to revisit them in the streamer’s new comedy series inspired by its vanquished business rival. It’s a development that some people on Twitter are still struggling to process, even as Netflix announced the premiere date of Blockbuster the sitcom on Aug. 26.

As you may recall, back when Netflix was still finding its way in the early 2000s, the brick-and-mortar video rental chain was thriving; at its peak in 2004, there were more than 9,000 Blockbuster locations around the world and the company saw nearly $6 billion in revenue. Then, as web video picked up, Netflix emerged as a major rival and eventually played a huge role in Blockbuster’s eventual bankruptcy.

It’s this history that has Twitter buzzing about the Netflix sitcom, which follows Timmy Yoon (Randall Park) and his co-workers at the last Blockbuster Video in America. For a lot of people, the decision to make the series was super harsh. “Netflix creating a series about blockbuster is some next level rubbing of salt in a wound,” one person tweeted. Others went so far as to describe it as flat-out “diabolical” or “sinister.” Another even referenced “those movies where a killer wears their victim’s skin,” quipping, “Totally unrelated, there’s a Netflix comedy about blockbuster coming out.”

Many people were very surprised by the turn of events. “Oh man. Netflix destroying Blockbuster and then making a Netflix show about Blockbuster is a bold flex no one was expecting,” one person wrote. Another called it “a power move and a half.”

The irony and perceived pettiness were too much for some people not to appreciate. One Twitter user even ventured to dub it “the funniest irony of this year,” and a chef’s kiss GIF said it all for someone else. Yet another added, “Netflix making a show about blockbuster after absolutely obliterating them from the earth is the type of success I believe we should all thrive for in life.”

Netflix has actually looked at the chain’s fight to stay alive in the past. It already offers the 2020 documentary The Last Blockbuster, which “reveals the real story of Blockbuster’s demise, and how one last location in Oregon keeps the spirit of a bygone era live.” Similarly, the sitcom will follow the employees’ “fight to stay relevant.” The synopsis adds, “The only way to succeed is to remind their community that they provide something big corporations can’t: human connection.”

Maybe Blockbuster will be able to thrive on Netflix when it arrives on Nov. 3.

More like this
Everything To Know About 'Cobra Kai' Season 6
By Brad Witter
The OG Power Rangers Are Returning For A Spandex-Clad Special
By El Hunt
Twitter Is Burning As Phoebe Dynevor Reveals Daphne’s 'Bridgerton' Exit
By Sophie McEvoy
'That '90s Show' Star Callie Haverda Got Advice From Mila Kunis & Ashton Kutcher
By Brad Witter
Get Even More From Bustle — Sign Up For The Newsletter
From hair trends to relationship advice, our daily newsletter has everything you need to sound like a person who’s on TikTok, even if you aren’t.