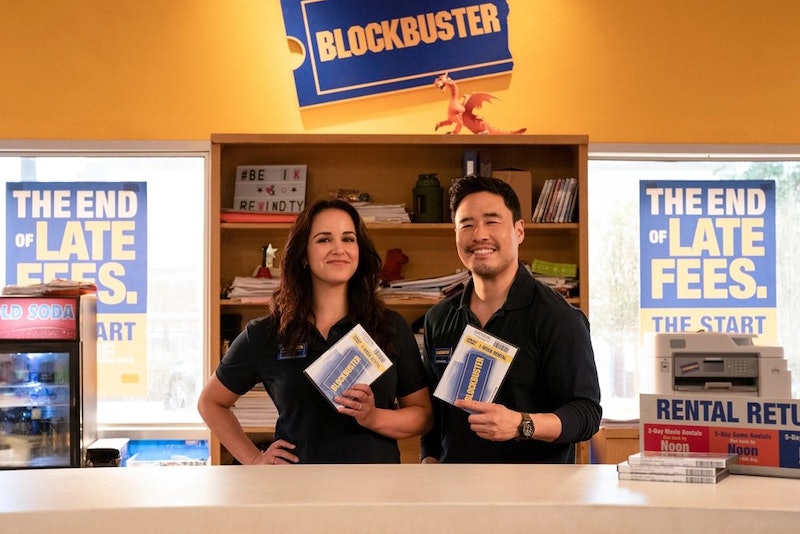 In what could be viewed as a fairly bold move, streaming giant Netflix’s upcoming new comedy — starring Brooklyn Nine-Nine’s Melissa Fumero and WandaVision’s Randall Park — revolves around life working at the very last Blockbuster video store in America. Once one of the leading destinations for renting home movies, the chain struggled when companies like Netflix launched at-home movie services. Eleven years after going bankrupt, just one IRL Blockbuster store remains in Bend, Oregon. Here’s everything you need to know about the upcoming series Blockbuster.

According to Netflix, the new show, shot on a single camera, centres around “what it takes — and, more specifically, who it takes — for a small business to succeed against all odds.” Fans were quick to point out the irony as Netflix partly contributed to Blockbuster’s demise, and now faces an increasing amount of competition from rival services.

Netflix and show creator Vanessa Ramos — previously a writer on Brooklyn Nine-Nine — have yet to reveal specific plot details of the 10-episode series, though the platform’s head of comedy Tracey Pakosta did give a taster in a press release. “This is ultimately the story of a dedicated group of co-workers, with a lot of heart,” she said.

Still going strong in real-life, Blockbuster’s last surviving store has stood in Oregon for the last twenty years, managing to keep trading throughout lockdown. "I had a customer come in and she said, 'I am so grateful that you reopened, because I couldn't flip through Netflix one more time,'" the store’s real-life manager Sandi Harding told Vice. Elsewhere, the store also temporarily converted into an Airbnb to try and drum up some extra cash, though it remains to be seen if that stroke of genius will make it into the show.

"To say getting to make a show about a place I love, with my friends Jackie and David, and Randall Park as our star, is a dream come true, somehow feels like an understatement," said Ramos in a statement following the show’s announcement.

What else do we know?

Though Netflix is yet to share a release date, a first look image shows Fumero and Park posing in the Oregon store, flanked by a series of posters advertising “the end of late fees.”

Back in 2004, Blockbuster was forced to scrap its late fees for overdue rentals in a bid to compete with Netflix, wiping an estimated $300 million from its annual profits.