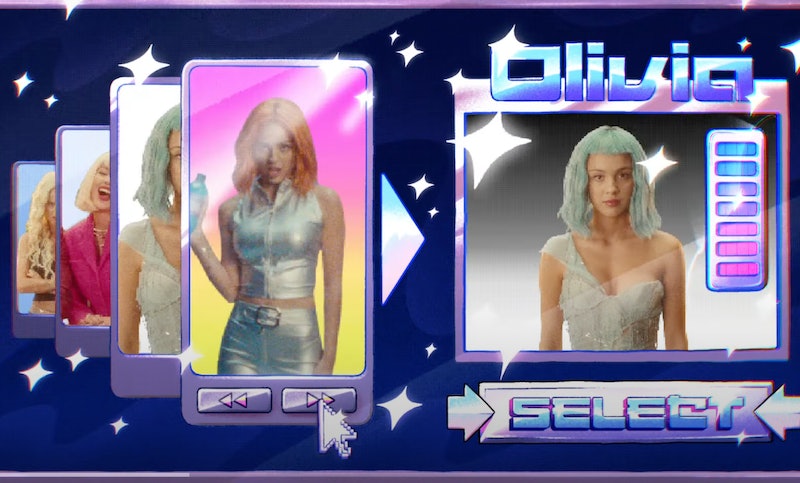 Olivia Rodrigo knows how brutal it is out here, but she just made it ten times better by dropping a new music video without any notice. Rodrigo surprise-released the video for “Brutal,” the opening track of her critically acclaimed debut album SOUR, on Aug. 23 and no one was quite prepared.

In the new clip, helmed by “good 4 u” director Petra Collins, Rodrigo takes the jaded schoolgirl vibes she’s been embodying during the SOUR era and runs with it, expressing her teenage angst by fumbling ballet class, creating a mock school newscast, and crying on an Instagram Live on the fictional @spicypiscesnyc account. Even a forced outing by her “two real friends” didn’t help — and only proved that she still can’t parallel park. The video features an unexpected cameo from The White Lotus star Lukas Gage, but you may not even recognize him in his newscaster costume.

The “drivers license” singer announced the video was out in an Instagram post singing the director’s praises: “brutal music video is out now! had the best time ever making this. so so so grateful for @petrafcollins who constantly inspires me and who directed this video so incredibly. hope u guys love the vid and all my teen angst lol.”

Twitter immediately freaked out about the video, mainly because it came without any warning.

After taking in the video, Twitter started fangirling over Rodrigo’s impeccable video looks, from the imperfect ballet uniforms to her punk-rock take on the classic schoolgirl uniform.

Of course, the memes created by Twitter fans were on fire ... quite literally, in some cases.

Rodrigo’s fans weren’t the only ones applauding the video. Fellow Disney alum Selena Gomez shared Rodrigo’s post on her Instagram Story and gave a shout-out to Collins, who has worked with Gomez on projects like the “Fetish” music video and “Bad Liar” cover art. “My bestie @PetraFCollins directed the perfectly adorable @OliviaRodrigo,” she wrote.

Rodrigo posted that the digital masks she wore in the video were made on an iPad.

More like this
The Best Memes & Tweets About Lady Gaga Reportedly Joining 'The Joker' Sequel
By Grace Wehniainen
Twitter Is Still Flying High After McFly’s Glastonbury Set
By Sophie McEvoy
Tristan Thompson Plays Drake’s Best Man In A Music Video Wedding With 23 Brides
By Grace Wehniainen
Will Beyoncé Be At The BET Awards To Perform “Break My Soul” Or Attend The Show?
By Jake Viswanath
Get Even More From Bustle — Sign Up For The Newsletter