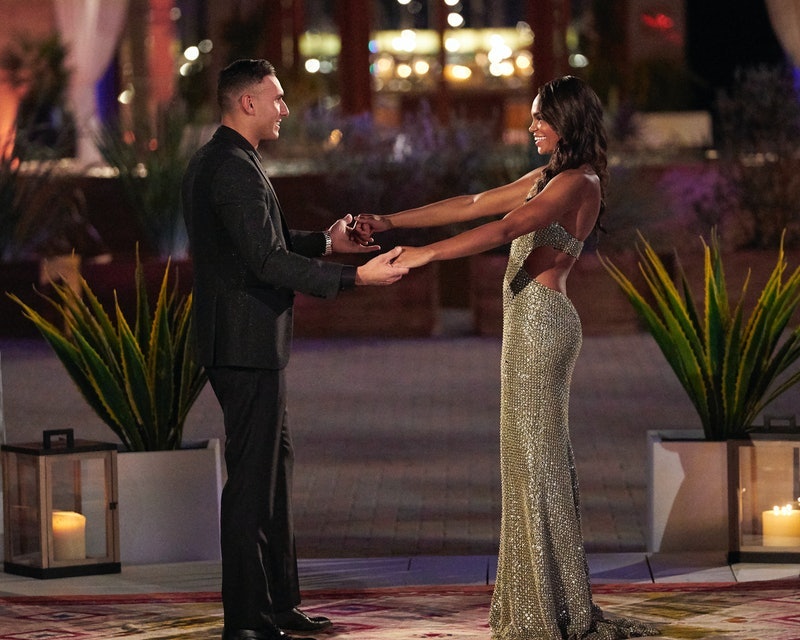 Peter and Will escalated their feud to new levels of petty during the Nov. 2 episode of The Bachelorette. While on a Top Gun-themed group date during which the men had to profess their feelings for Michelle, tension built after Peter spoke to Michelle in Italian and Will then one-upped him by speaking in Spanish. They then immediately participated in a wrestling-like match where Will bested Peter once again. His prizes were extra one-on-one time with Michelle and a bomber jacket.

When the men returned for the afterparty, Peter let his feelings be known. He chided Will for pushing him after he repeatedly tried to get back up on the mat, which — checks notes — was the exact purpose of the game. Will then called Peter a “pizza boy,” and Peter — the proud owner of a pizzeria — took offense. “Don’t call me a pizza boy,” he retorted, adding that Will wished he was a pizza boy and claiming, “I change lives one slice at a time.”

Later, while Will was off talking to Michelle, Peter put on and paraded around in Will’s newly-won jacket before tossing it in the pool. Viewers at home were, needless to say, extremely over the whole spat.

Some found it funny that Nayte got stuck behind with Will and Peter while they were talking over each other.

Others couldn’t help but balk at Peter’s “changing lives one pizza at a time” line. One viewer even pointed out how similar it was to Papa John’s “Improving people’s lives, one person at a time” campaign.

When Will finally returned to the group and found out what happened to his jacket, he couldn’t help but get emotional but ultimately decided not to burden Michelle with the incident. Some fans felt for Will, especially after he was shown fishing the garment out of the pool. “wait i didn’t know this jacket drama was gonna make me emotional. DONT CRY BB WILL,” one person tweeted.

Meanwhile, others wanted Will to tell Michelle what happened or for Michelle to notice the jacket was missing herself.

Peter ultimately went home during the rose ceremony, putting an end to the feud once and for all.