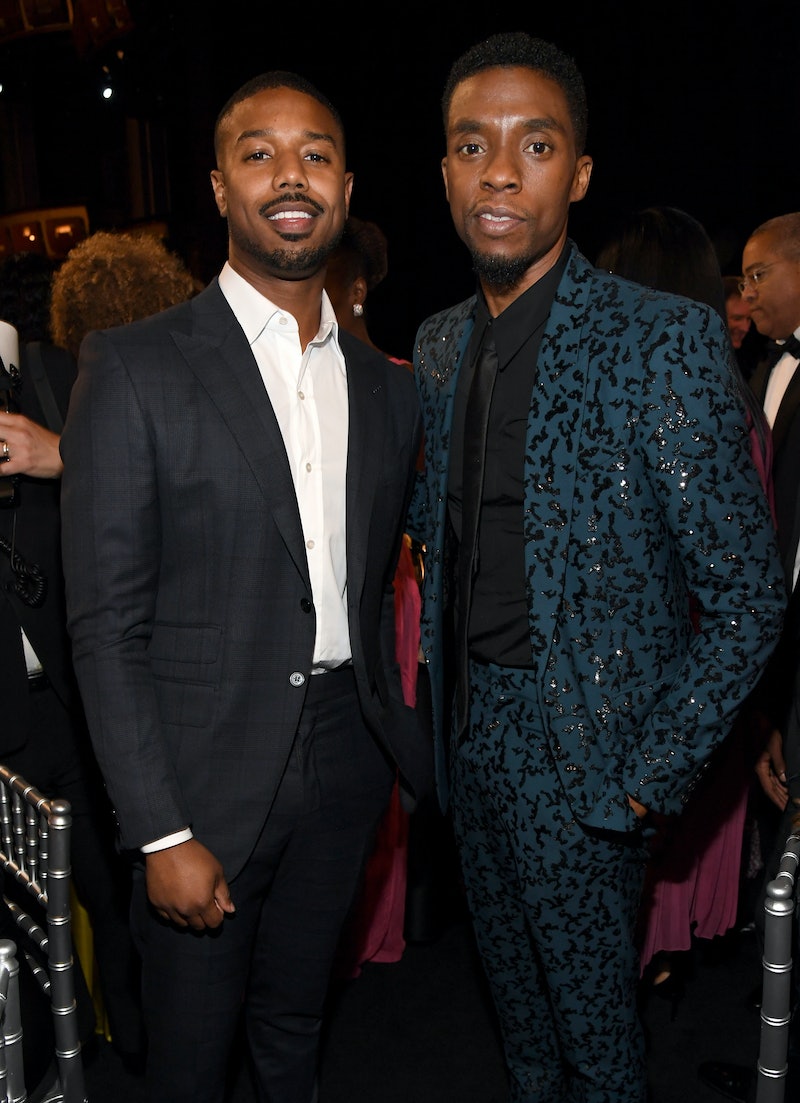 After his Black Panther co-star made SAG Awards history this week, Michael B. Jordan celebrated Chadwick Boseman's record-breaking four nominations on Instagram. "4. Still setting the bar higher. Miss you big homie," he captioned a series of stills from Ma Rainey's Black Bottom and Da 5 Bloods on Friday, Feb. 5. One day earlier, Boseman became the first actor to ever receive four Screen Actors Guild noms in the film categories in one year. (Entertainment Weekly noted that other actors have been nominated four times in one year before, but at least one recognition was in a TV category.)

The late actor's 2021 SAG Awards nominations come in the categories Outstanding Performance by a Male Actor in a Leading Role for playing Levee in Ma Rainey's Black Bottom; Outstanding Performance by a Male Actor in a Supporting Role for his turn as Stormin' Norman in Da 5 Bloods; and Outstanding Cast in a Motion Picture for each work. When Boseman's family announced on Aug. 28 that the actor had died at the age of 43 following a private four-year battle with colon cancer, they noted that both films were among those he shot "between countless surgeries and chemotherapy."

Speaking to People in late January, Jordan further reflected on the loss of Boseman, who also just received his first Golden Globe nomination for Ma Rainey's Black Bottom, revealing that he would return for Black Panther 2, if the filmmakers offered him a role. "That's something that is very, very near and dear to my heart for a lot of obvious reasons," the Creed actor said. "[I] had a really tough year losing somebody close to me, and what that means for that franchise is devastating."

In the days following Boseman's death, Jordan also shared a heartfelt tribute to his late friend on social media, explaining that he had been "reflecting on every moment, every conversation, every laugh, every disagreement, every hug" that they'd shared. "You showed me how to be better, honor purpose, and create legacy," he added to the lengthy Aug. 31 Instagram post. "And whether you’ve known it or not… I’ve been watching, learning and constantly motivated by your greatness."

And with Boseman's history-making SAG nominations, the actor's legacy only continues to grow.

More like this
Here’s Everything Coming To & Leaving Netflix In February
By Jake Viswanath
Pamela Anderson’s Dating & Marriage History Could Be Its Own TV Series
By Jake Viswanath
At 28, Debra Jo Rupp Was Living A Much Different '70s Show
By Grace Wehniainen
Brittany Snow Files For Divorce From Tyler Stanaland After 'Selling The OC' Drama
By Grace Wehniainen and Radhika Menon
Get Even More From Bustle — Sign Up For The Newsletter
From hair trends to relationship advice, our daily newsletter has everything you need to sound like a person who’s on TikTok, even if you aren’t.