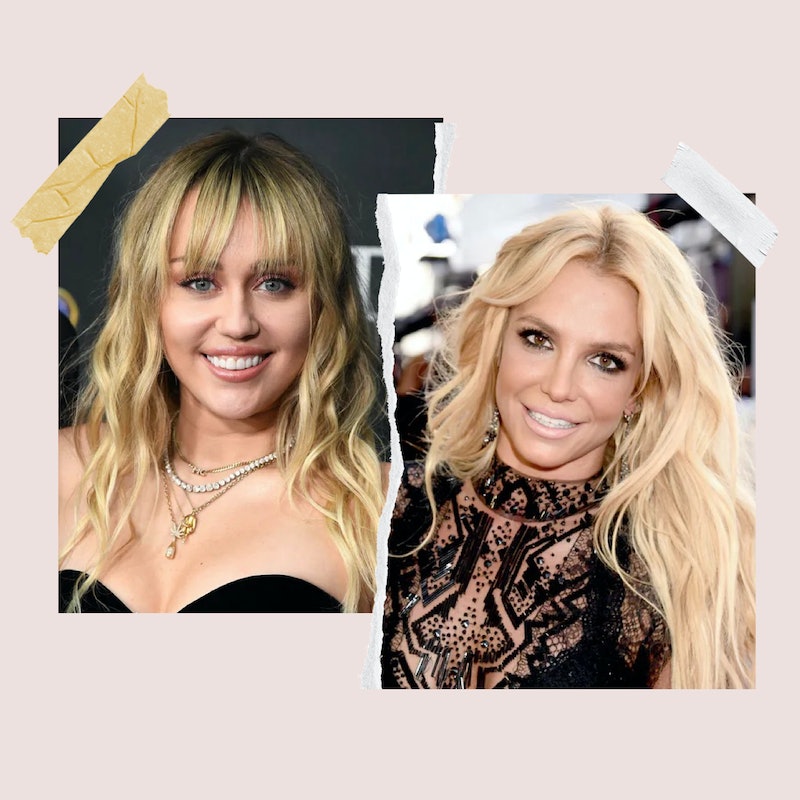 Sorry, Jay-Z, but right now, Miley Cyrus is more concerned with the other singer named on her iconic hit “Party In the U.S.A.” Cyrus showed her support for Britney Spears during her Las Vegas show on July 4, amid the singer’s battle over her conservatorship. On June 23, Spears spoke out against her conservatorship in court, saying it had become “abusive” after she was allegedly held at a mental health facility and put on lithium against her will in 2019, and outlining restrictions that her conservator, father Jamie Spears, reportedly inflicted upon her. “He loved the control to hurt his own daughter 100,000%,” she said. “In California, the only similar thing to this is called sex trafficking.”

While performing “Party In the U.S.A.” as the finale of her Fourth of July show (how fitting), Cyrus changed the line “That's when the taxi man turned on the radio, and a Jay-Z song was on” to “He turned to me and said, ‘Free Britney!’,” leading her audience into a “Free Britney” chant. As seen in fan videos from the show, Cyrus meant to revert back to the rapper’s lyric after the second verse, but instead, she interrupted it halfway. “Honestly, f*ck Jay-Z, free Britney!” she yelled, before defending her remark during the chorus. “We love Jay-Z, but we got to free this b*tch,” she said. “It's stressing me the f*ck out.”

This isn’t the first time that Cyrus has shown her unwavering devotion to Spears. After Cyrus paid tribute to Spears on “Party In the U.S.A.” back in 2009, the “Gimme More” singer collaborated with the Hannah Montana star on “SMS (Bangerz),” the iconic title track of Cyrus’ hit album Bangerz. Cyrus attended the opening night of Spears’ Las Vegas residency Piece of Me later that year. As the #FreeBritney movement grew more popular online, Cyrus was one of its first supporters, chanting “Free Britney” at the Beale Street Music Festival in May 2019.

Cyrus’ support of the #FreeBritney movement is particularly notable, given how they had the same management team, Larry Rudolph and Adam Leber, in 2013. In fact, she was mentioned by Spears during her landmark testimony, as she explained how Cyrus could do what she wanted under their managers but she wasn’t allowed the same privileges. “My dad and anyone involved in this conservatorship and my management who played a key role in punishing me — ma’am, they should be in jail,” she told Judge Brenda Penny. “They’re working for Miley Cyrus as she smokes joints onstage at the VMAs — nothing has ever been done to this generation for doing wrong things.” (Cyrus now only works with Leber after he split from Rudolph.)

Before the show, Cyrus signalled her support of Spears by re-posting an Instagram meme from @sainthoax of Hilary Duff dancing to “Party In the U.S.A.” — except it’s just the “Britney song was on” lyric repeated over and over again. “An actual video of me at @resortsworldlv tonight partying in the USA!” she captioned the post. “Land of the #FreeBritney.”

Cyrus is apart of a wave of celebrities who have voiced their support for Spears since she gave her emotional testimony, including Spears’ ex-boyfriend Justin Timberlake and her Mickey Mouse Club castmate Christina Aguilera. “These past few days I’ve been thinking about Britney and everything she is going through,” Aguilera wrote on Twitter. “It is unacceptable that any woman, or human, wanting to be in control of their own destiny might not be allowed to live life as they wish.”

More like this
Britney Spears Shared The Real Reason She Shut Down Her Instagram Account
By Brad Witter
5 Wild Theories About Miley Cyrus’ “Flowers” Music Video
By Jake Viswanath
Twitter Is Having A Meltdown Over Buying Beyoncé Renaissance Tour Tickets
By Jake Viswanath
The Beyhive Is Mad At Harry Styles After Beyoncé’s Album Of The Year Snub
By Jake Viswanath
Get Even More From Bustle — Sign Up For The Newsletter
From hair trends to relationship advice, our daily newsletter has everything you need to sound like a person who’s on TikTok, even if you aren’t.