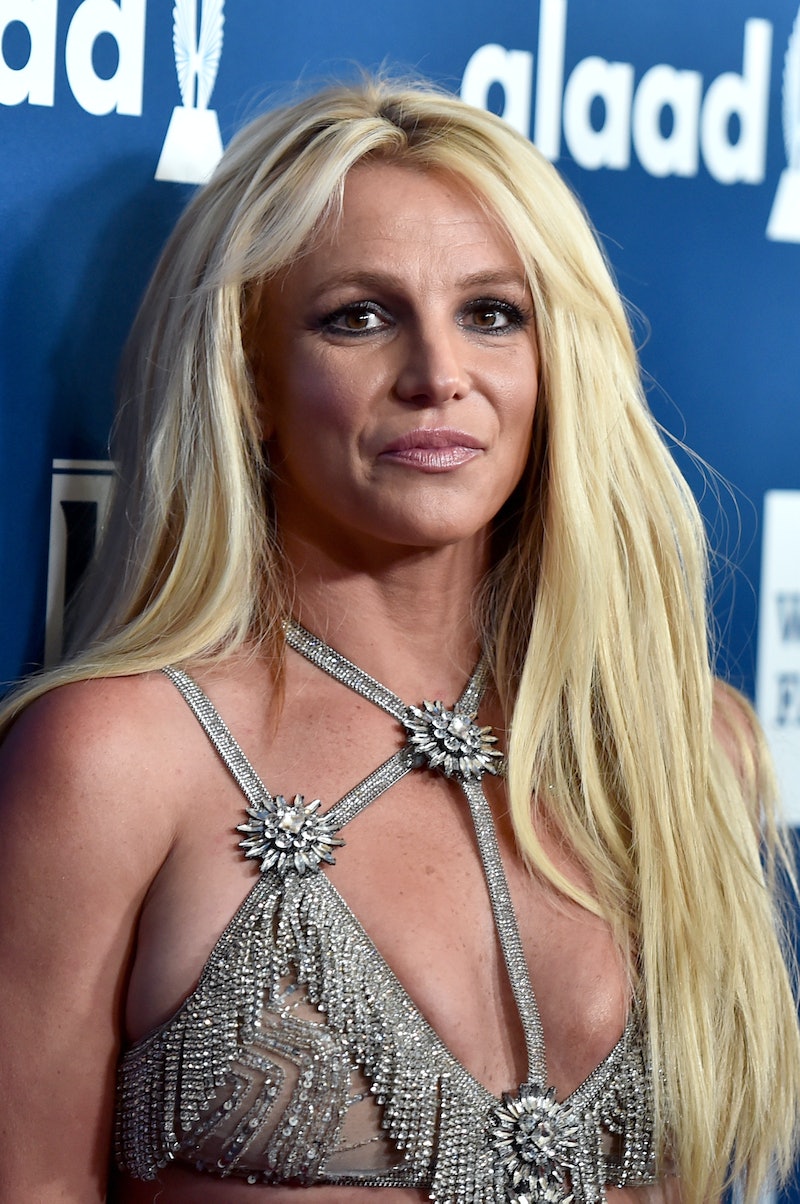 In a new Instagram post, Britney Spears stressed the importance of self-care. "We all need to take time for a little "me time." :)" the singer wrote on Wednesday, April 3. Also accompanying her caption was an image of a quote that read: "Fall in love with taking care of yourself, mind, body, spirit." Her social media message came amid a TMZ report the same day claiming that Britney is seeking treatment in a mental health facility. (Bustle reached out to Spears' reps for comment on the reports, but has not yet received a response.)

Citing unnamed sources, TMZ claimed that Britney reportedly "checked herself into the facility about a week ago where she will live for 30 days." Entertainment Tonight also later asserted via their own Spears family sources that the singer is reportedly "currently in a facility taking time to care for herself." The rumored cause of her distress, per both outlets, stems from a major health scare her father Jamie Spears suffered late last year.

Following her four-year Britney: Piece of Me Las Vegas residency's December 2017 finale, the Grammy winner had been scheduled to return to Sin City this year with a new show called Domination. On Jan. 4, however, Britney announced she was taking an "indefinite hiatus" from performing in order to car for her ailing father.

As she wrote in an Instagram post, along with a childhood photo of herself with her dad and her mother, Lynne Spears:

"I don’t even know where to start with this, because this is so tough for me to say. I will not be performing my new show Domination. I’ve been looking forward to this show and seeing all of you this year, so doing this breaks my heart. However, it’s important to always put your family first… and that’s the decision I had to make. A couple of months ago, my father was hospitalized and almost died. We’re all so grateful that he came out of it alive, but he still has a long road ahead of him. I had to make the difficult decision to put my full focus and energy on my family at this time. I hope you all can understand. ... I appreciate your prayers and support for my family during this time. Thank you, and love you all… always."

As reported by People, Britney's father's "life-threatening colon rupture" is the reason the singer is currently prioritizing her own well-being.

“Her dad being sick has taken a toll on her,” an anonymous Spears family source explained to the magazine. “He nearly died and actually had another surgery a few weeks ago. He’s not doing well. They’re so close and it has been a lot. There is nothing dramatic going on with her — she just realized she needs to make sure to take time to care for herself.”

Shortly after Britney announced her Domination hiatus in January, her younger sister, Jamie Lynn, also addressed the Spears family's difficult time. "Thank you to everyone who reached out to our family, and for all of your prayers," Jamie Lynn posted to her Instagram Stories. "All of you have been there for us through so much, and we truly appreciate each of you!! Love y’all bunches!"

As the Spears family grapples with these trying times, fans are embracing Britney's Instagram message about the importance of self-care — and are continuing to send her hosts of well-wishes and support.