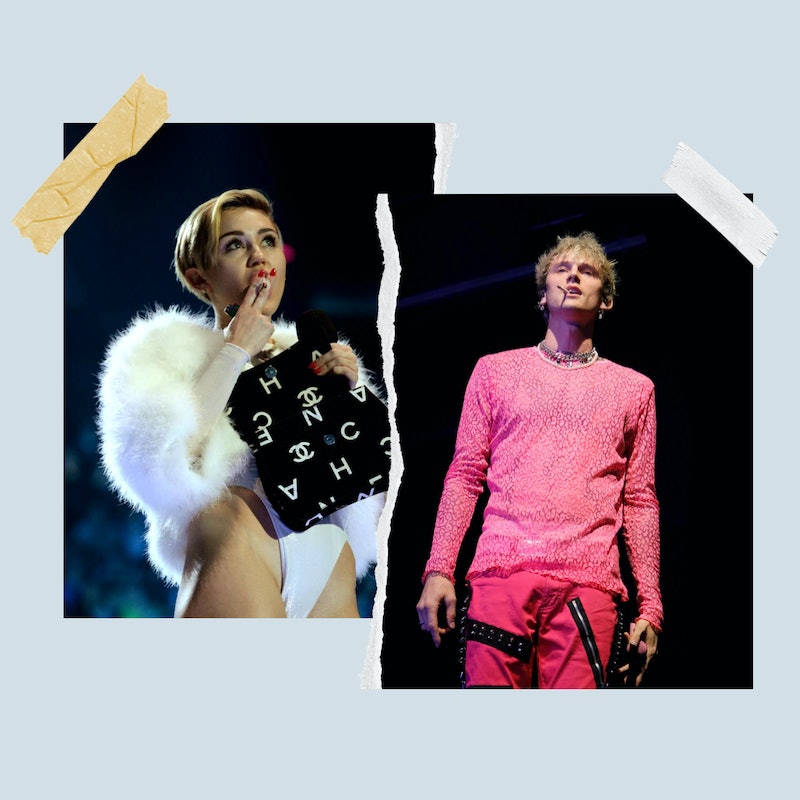 Watch out, Hannah Montana and Ashley O, because Miley Cyrus may have yet another alter ego that even her biggest fans didn’t know about. The 28-year-old pop star thinks she and Machine Gun Kelly might be the same person, she jokingly speculated on Twitter on Oct. 18, and she offered up some compelling evidence for her theory.

It all started when Cyrus posted two new snapshots from her Miley World photoshoot on social media, captioning the post with, “I AM WEED,” nodding to her green dress. The phrase came from Megan Fox and MGK’s interview with GQ Style, where Fox explained how they first met at a GQ party before becoming an official couple. “I don’t remember your face,” she explained. “I just remember this tall, blond, ghostly creature. I looked up and I was like, ‘You smell like weed.’ He looked down at me and he was like, ‘I am weed.’ Then, I swear to God, he disappeared like a ninja in a smoke bomb.”

The rapper’s bizarre response became an instant meme, with Cyrus now getting in on the trend.

MGK reacted to the Disney alum on Twitter, quote tweeting her post and writing, “See, I’m not the only one.” Cyrus responded back the next day, pointing out the other ways that she thinks the two artists are similar. “We may actually be the same person. Have we ever been seen at the same place @ the same time?” she asked, adding the side-eye emoji for emphasis. To clarify, she also said this meant they shared the same girlfriend: “& yes that means Megan Fox is my gf too.”

To prove Cyrus’ point, the two have never worked together on music, and they haven’t even been seen together publicly. The artists both performed at the Austin City Limits Music Festival on Oct. 1 and Oct. 8, with MGK playing a mid-day set on the same stage that Cyrus headlined later that night, which is possibly when they first got to know each other. However, there are no backstage photos or other proof that they’ve even met, which begs the question: Has Cyrus been performing as Machine Gun Kelly this whole time? Given how she fooled nearly everyone on Hannah Montana, it wouldn’t be shocking if she pulled off this stunt in real life.