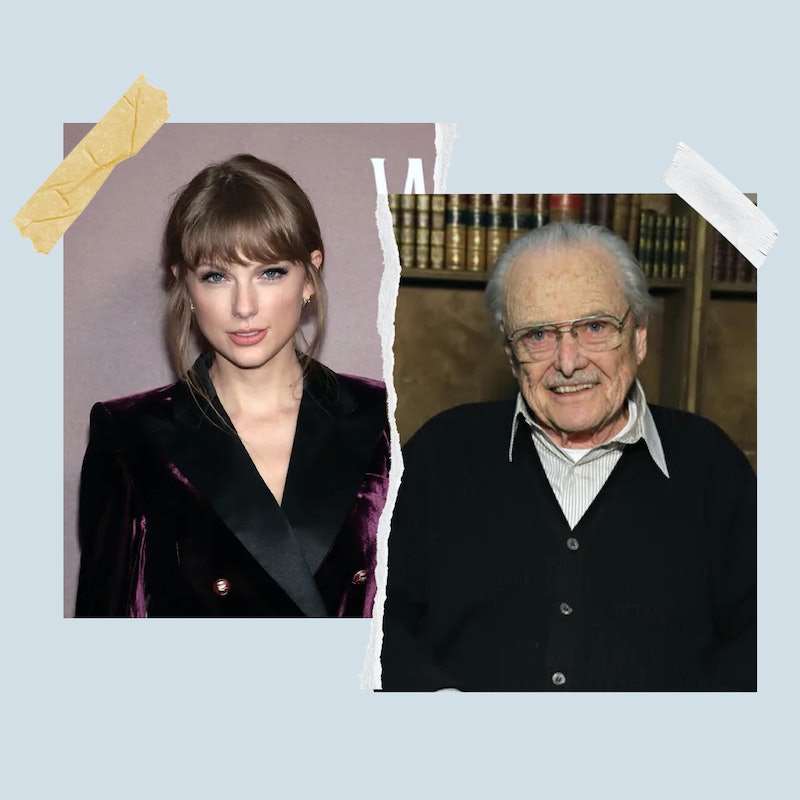 Mr. Feeny is a certified Swiftie. Boy Meets World star William Daniels promoted Taylor Swift’s new album Red (Taylor’s Version), the re-recording of her Grammy-nominated 2012 album Red, in a TikTok video on Nov. 15. Daniels played the beloved teacher of Cory Matthews and his friends throughout all seven seasons of Boy Meets World, and going by her reaction to his video, Swift loved him just as much as every other fan of the show. In fact, Daniels was so touched by her reaction that he reached out to the singer again, wishing Swift a happy birthday on Dec. 13.

After Daniels approved Red (Taylor’s Version), released on Nov. 12, Swift commented on the TikTok video and had a fitting fangirl reaction to receiving his blessing. Even her younger brother Austin was shook by the shoutout. “My brother and I are FREAKING OUT, we're huge fans!!!” she wrote, as captured by Instagram account @commentsbycelebs. “This is so awesome. Thank you! And thank you Grace!!!”

“And as you know all too well, believe in yourself, dream, try, do good,” he said.

In the video, which was initially posted on his granddaughter Grace’s TikTok account, the 94-year-old actor sits in a chair sporting a red flannel shirt, just like your adorable grandpa, and introduces himself as Bill Daniels. “You know, some things get better with age, like the wisdom of Mr. Feeny,” he said.“So, I’m here to tell you to listen to the new and better Red by Taylor Swift, mostly based on the recommendation of my granddaughter Grace.”

Daniels concluded his video with an adorable “All Too Well” reference and one of Mr. Feeny’s most memorable quotes. “And as you know all too well, believe in yourself, dream, try, do good,” he said. Going by his words, his favorite song from Red (Taylor’s Version) might also be “All Too Well (10 Minute Version).”

Mr. Feeny was evidently moved by Swift and her brother’s fandom (which he was told about by Grace, of course), so he used Cameo to wish her a happy 32nd birthday on Dec. 13.

“I heard from my granddaughter Grace that you and your brother saw that little video I did for her, and it turns out that you’re fans of Mr. Feeny. That’s great!” he said, before imparting some of his wisdom on the singer. “I started performing when I was a kid, I was on Broadway as a teenager, but all my most personally gratifying achievements happened after I turned 30, and I wish the same to you. So from my family to yours, have a wonderful holiday and happy birthday.”

After Swift responded to the viral November clip, Grace posted a new TikTok video reacting to the singer’s comment, proving she’s an even bigger Swiftie than her grandpa. “She said my name!” she ecstatically repeated. “What the f*ck? What is today? November 15th will go down in history as... What? What am I looking at? I’m going to have a f*cking heart attack!”

In another video, Grace clarified that Mr. Feeny is a Swiftie “because I am a Swiftie” and said she wouldn’t be able to post any more videos of her grandpa until she saw him over winter break. Perhaps then we’ll find out which “Taylor’s Version” album he wants Swift to release next.

More like this
Taylor Lautner Thought Taylor Swift's 2009 VMAs Interruption Was A "Skit"
By Alyssa Lapid
The Ticketmaster Senate Hearing & Taylor Swift Tickets Debacle, Explained
By Jake Viswanath
Taylor Swift May Miss The 2023 Grammys For Reasons Fans Know “All Too Well”
By Jake Viswanath
Zach Gilford Admits He Forgot Taylor Swift's Name When He Starred In Her Music Video
By Jake Viswanath
Get Even More From Bustle — Sign Up For The Newsletter
From hair trends to relationship advice, our daily newsletter has everything you need to sound like a person who’s on TikTok, even if you aren’t.