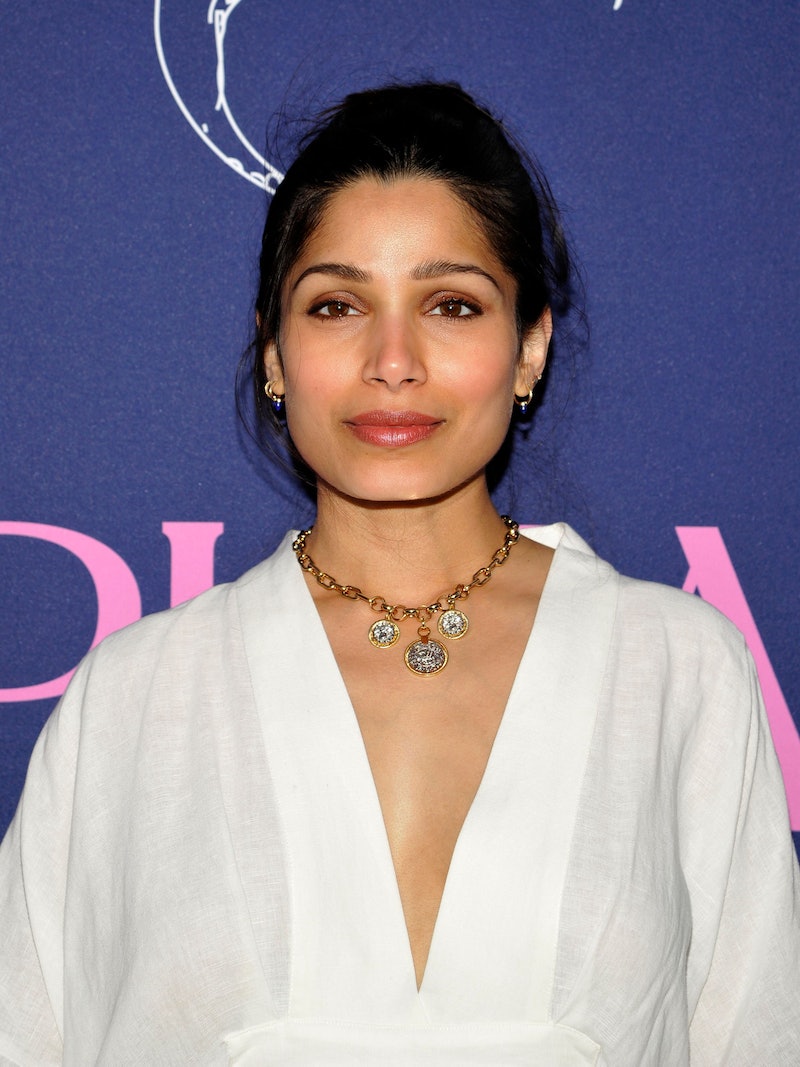 Slumdog Millionaire and Immortals star Freida Pinto steps into the lead role for Emma Holly Jones' feature film debut. And as it turns out, she's been prepping for this since her late teens. Having studied English literature at university, the South Asian actress grew fond of the notable classics, per Vanity Fair, and started envisioning herself playing Jane Austen protagonists. "They were defying odds in their time," Pinto told Vanity Fair. "They had to overcome the hurdles society has placed in front of them." She'll co-star alongside British Nigerian actor Ṣọpẹ́ Dìrísù (His Dark Materials, Gangs of London) who's set to play her love interest, Mr. Malcolm.

Mr. Malcolm's List started out as a book and screenplay by writer Suzanne Allain. Here’s everything to know about the upcoming film adaptation.

Set in the 19th century, the film introduces us to Mr. Malcolm, a wealthy bachelor with a respectable title, who is looking for a bride. But the lucky lady must first meet his extensive and fussy list of requirements, per Yahoo News. A plot line that is, in some ways, similar to Bridgerton's most recent season with Jonathan Bailey.

Pinto plays "country girl" Selina Dalton, who starts out by seeking revenge on Mr. Malcolm, alongside her friend Julia Thistlewaite (Zawe Ashton), after he rejects Julia for not meeting his criteria. Yes, it’s another classic enemies to lovers story arc.

Alongside Pinto as Selina, Dìrísù as Mr. Malcolm, and Ashton as Julia, other cast announcements include Oliver Jackson-Cohen as Lord Cassidy and Ashley Park as Gertie Covington, per IMDb. Plus Theo James as Captain Henry Ossory. And there's still more to come.

Inspired by watching Hamilton on Broadway, filmmaker Jones was reportedly keen for a racially diverse cast, especially for its key roles. Speaking to Vanity Fair, she dubbed Dìrísù the "new Mr. Darcy" and said she had to have him as co-lead, or "we don’t make the film".

Also speaking to Vanity Fair, Dìrísù said he used to be indifferent to period dramas, because typically "there were no stories of colour being told in those films."

Mr. Malcolm’s List will debut in UK cinemas on July 1.

An official trailer hasn't been released yet, but first-look photos have been published by Vanity Fair. A short feature film showcasing the drama is also available to watch, per Refinery29. This was produced after The Black List gave the Mr. Malcolm's List screenplay a table read, per Vogue India.