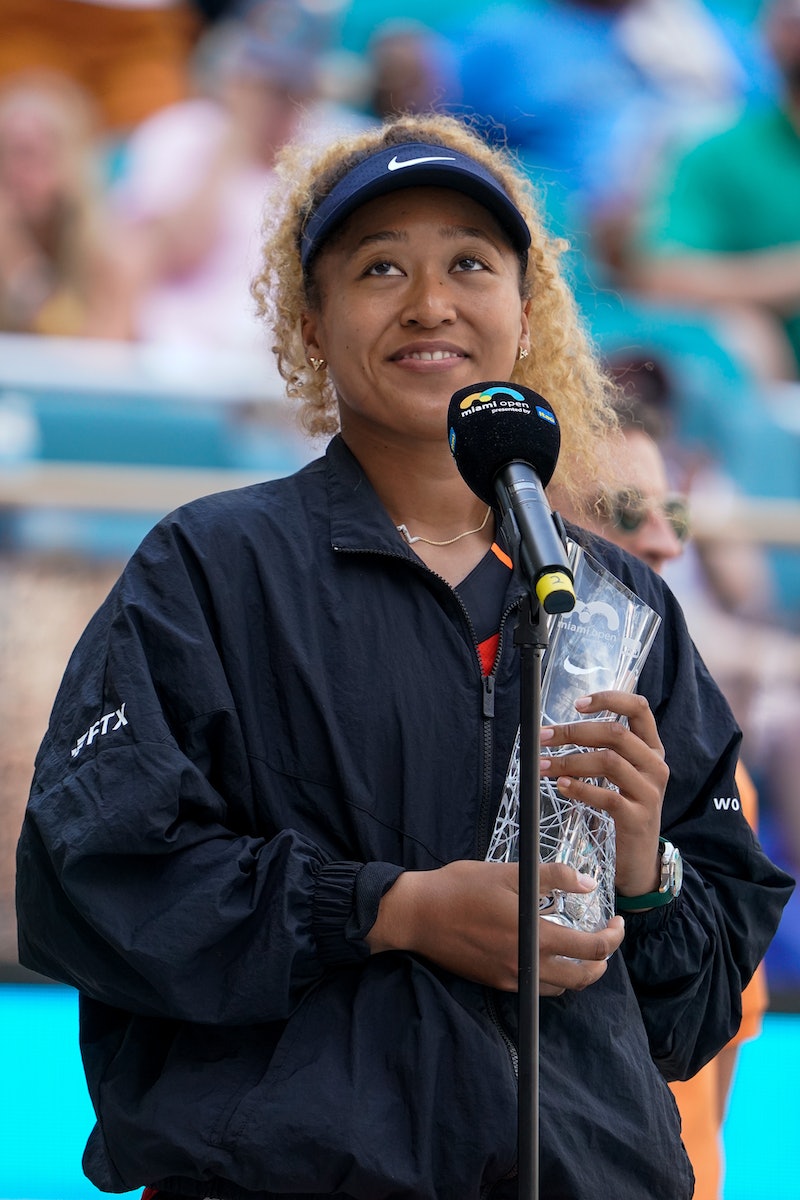 The past year has had hard moments for Naomi Osaka, but the tennis star was full of gratitude after finishing as runner-up in her most recent tournament, the 2022 Miami Open. The former world No. 1 fought her way to her first final since the 2021 Australian Open more than a year ago, and though she ultimately lost to Poland’s Iga Swiatek 6-4, 6-0, Osaka celebrated the moment. “Just to be in a final again, it means a lot to me,” she said during her speech after the match on Saturday, April 2.

Heading into the final, Osaka had let her Instagram followers know she was “so grateful” to have made it that far. “Cheers to the ups and downs of life for making me appreciate this moment even more,” she captioned a post, in part. The next day, in her runner-up speech, she thanked fans for their support by letting them know her trophy was for them.

“I want to dedicate this one to all the people that support me, my fans,” she said. “I know I haven’t been in this position for a little minute. … I know this isn’t the outcome that you guys wanted, but I don’t know, I’m having a lot of fun up here, so I hope that I can keep working hard and get more opportunities to be in a situation like this again.”

It has indeed been “a little minute” since Osaka last played in such a big match. After starting off last season with her fourth grand slam win in February 2021, she opened up about facing mental health challenges in the months that followed. She opted not to participate in press conferences at the 2021 French Open, and then withdrew from the tournament entirely because of the backlash. After skipping Wimbledon, Osaka had another disappointing loss at the Tokyo Summer Games, where the pressure was on for her to win in her home country. Then, at the next major, the U.S. Open, she lost in the third round and announced that she needed a break, noting that wins weren’t making her happy anymore and losses were making her “very sad.”

In her Miami Open speech, Osaka also alluded to some of her struggles, including a recent heckling incident that left her in tears at the BNP Paribas Open last month. She called her team “the rock that stays by my side” through disappointments like that. “They’re the ones that keep pushing me forward,” she said. “Thank you guys so much.”

Osaka was also gracious to her opponent, Swiatek, who is about to take over as the new No. 1. As she congratulated her, she recalled a dinner they’d had together in Australia and let Swiatek know that both she and her team are doing a great job. “You’re a really incredible, amazing person, and I hope that you guys keep going forward,” she said.

More like this
The 2023 Super Bowl Commercials Feature A 'Breaking Bad' Reunion & Missy Elliott
By Alyssa Lapid
Twitter Is Shook As Tom Brady Holds Back Tears Announcing His 2nd Retirement
By Marina Watts
David Beckham’s Controversial Qatar Deal Skyrocketed His Net Worth
By Catharina Cheung
Melanie Lynskey Plays A “Ruthless Leader” In 'The Last Of Us'
By Brad Witter
Get Even More From Bustle — Sign Up For The Newsletter
From hair trends to relationship advice, our daily newsletter has everything you need to sound like a person who’s on TikTok, even if you aren’t.