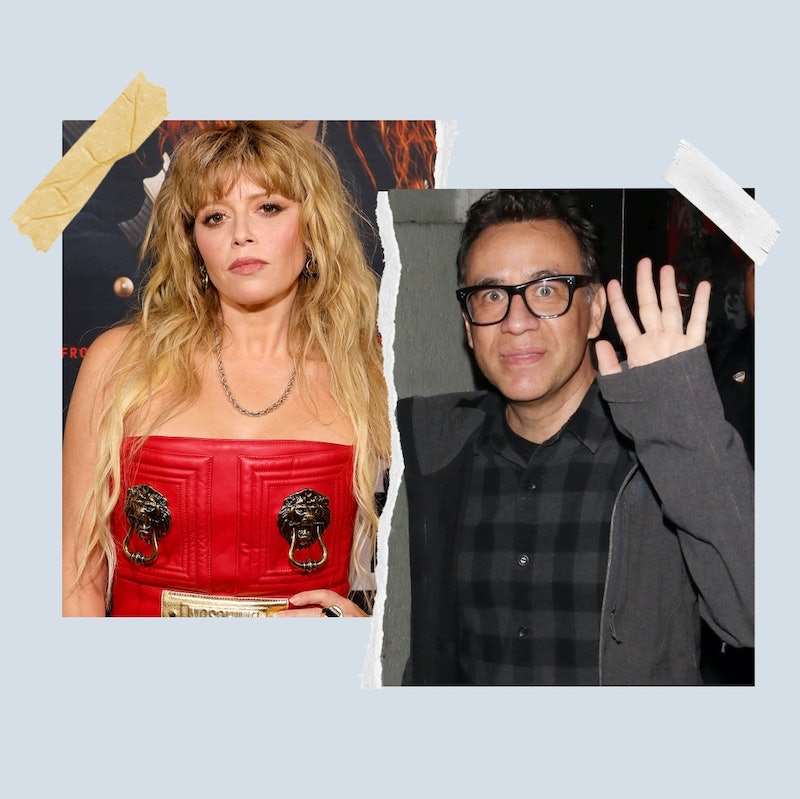 Natasha Lyonne and Fred Armisen are always putting themselves out there, whether it’s onscreen in her Netflix show Russian Doll or one of his several comedy projects, so it’s no surprise that Lyonne and Armisen's relationship timeline is full of hilarious costumes, award show shenanigans, and wholesome displays of affection on Instagram. What does come as a shock is how their love story apparently ended. Lyonne confirmed her split from Armisen in April 2022, blaming the break up on a very surprising dealbreaker: a swimming pool.

Throughout their seven-year relationship, they gave insights into their romance on special occasions like birthdays and the Emmys — where Armisen was known to don costumes on the red carpet, with Lyonne always laughing by his side. Their red carpet antics became an Emmys staple.

Before these performers began dating, Armisen had been married twice before — to English musician Sally Timms from 1998 to 2004 and American actor Elisabeth Moss from 2009 to 2011. In interviews, Armisen has confessed that he wasn’t very good in committed relationships, telling Howard Stern in 2013 that he was a “terrible husband” to Moss and admitting to Marc Maron that they divorced due to his infidelity. Lyonne explained her issues with monogamy to Bust magazine in 2001. “I think monogamy was created by men because of jealousy and their need for ownership, but now it's viewed as the weak neediness of women, and that pretty much sucks for us,” she said. While Lyonne said she had no issues with commitment, she noted that there were “very few people I like on the planet” enough for her to be monogamous.

As their relationship timeline shows, Armisen and Lyonne were happily committed to one another for over seven years — until a swimming pool dispute apparently ended things.

Sometime Between 2001-2006: They Meet Thanks To Mutual Friend Maya Rudolph

In her cover story with Glamour from September 2019, Lyonne said that her pal Maya Rudolph had introduced her to Armisen years ago. But she admitted she didn’t recollect the meeting due to her drug use. Lyonne and Rudolph met in 2001 and EW reported Lyonne entered rehab in 2006 and became sober, so they most likely met in the early aughts. No matter the date, Lyonne remembered Armisen and Rudolph visiting her at her apartment all those years ago fondly to Glamour.

Before any official reports had the pair linked, Lyonne snapped a shot of her Orange Is the New Black costar Danielle Brooks with Armisen and Carrie Brownstein of Portlandia. Lyonne shared the pic she took on Instagram with the caption, "Very nice party. Sexy sexy."

Lyonne popped up on Armisen's Instagram for the first time when he posted a pic of her with the caption, “The beautiful and brilliant Natasha Lyonne.” He used the hashtag Portlandia, so it seemed that she was just filming a guest spot for his show, but it turned out to be more.

August 2014: They Become Official After The Emmys

Us Weekly first reported that Armisen and Lyonne were a couple after the 2014 Emmy Awards. They attended the Variety and Women in Film Emmy Nominee Celebration together, as well as the actual Emmys and a number of afterparties. When Ross Mathews was interviewing her on the Emmys red carpet for E!, Lyonne was distracted by her phone and told Mathews, “This is not a G-rated text message I’m sending right now,” hinting at a new sext-worthy relationship.

After news of their coupledom broke, it seemed that Armisen was hanging with Lyonne's pup Root Beer in an Instagram post, all but confirming their relationship.

Lyonne might have attended the 2015 SAG Awards with her pal (and Armisen's former SNL castmate) Amy Poehler, but Armisen still gave his girlfriend a shoutout for winning Outstanding Performance by an Ensemble in a Comedy Series. Also this month, Lyonne’s first Portlandia appearance occurred (she returned to the series four more times after) and the pair hung out at SF Sketchfest where drag artist Peaches Christ performed as Lyonne’s But I’m a Cheerleader character.

The pair took their love international with a journey to Iceland’s capital Reykjavík alongside friend and Armisen’s SNL co-star Aidy Bryant.

The pair got really romantic when they went grave hunting together. Lyonne showed her love a more traditional way in another post from this month when she called Armisen one of her favorite people.

September 2015: Freddy Kruegering At The Emmys

Lyonne was so amused by her boyfriend's A Nightmare on Elm Street-themed attire on the red carpet at the 2015 Emmys, complete with that terrifying claw, that she even posted a throwback pic of his unforgettable look the next year. As he shared on Instagram, Armisen did clean up a bit for the actual awards show, changing into a more typical suit.

Armisen and Lyonne spent her birthday in France in 2016.

May 2016: Wishing Armisen Luck On SNL

When Armisen returned to Saturday Night Live to host for the first time, Lyonne showed him some support on social media.

Lyonne and Armisen (along with Corin Tucker of Sleater Kinney and her daughter Grace) posed with Glenn Danzig after seeing the Misfits. The event prompted Lyonne to give Armisen the “Boyfriend of the Year award.”

The couple channeled Bride of Frankenstein at the 2016 Emmy Awards when they arrived in a hearse and Armisen rocked bolts in his neck.

Nick Kroll and John Mulaney hosted the 2017 Film Independent Spirit Awards, but Armisen still got to play along when he channeled Weekend at Bernie’s for the “non-memoriam” part of the show while Lyonne looked on in amusement. All four of them have appeared on Netflix’s Big Mouth.

March 2017: Lyonne Has Some Competition

Lyonne may give off some Linda Ramone vibes, but don't worry — the Russian Doll actor was just joking that Armisen and Ramone were a new couple after Johnny Ramone’s wife popped up on Portlandia.

The couple celebrated another one of Lyonne's birthdays together with a trip to Disneyland. They even wore matching Mouseketeer ears.

For the 2018 Emmys, Armisen kept his themed looks going when he wore vampire fangs on the red carpet, with Lyonne in a red lace dress. In a post featuring Armisen and Sarah Silverman, Lyonne wrote, “Heroes of my heart and verrrry scary.”

In March 2019, Lyonne appeared in an episode of Armisen’s series Documentary Now! titled “Long Gone,” which was a parody of the Chet Baker doc Let’s Get Lost. Armisen portrayed musician Rex Logan, while Lyonne played his lover Carla, who had some musical talent of her own.

Armisen neglected to wish Lyonne a happy birthday in 2018 (to be fair, he hadn’t been posting much on social media then), but he made up for it with his 2019 post.

When asked about her cinematic crush in an interview with W Magazine, Lyonne sweetly answered Armisen — well, as one of them. “Fred, I have a crush on, but I’m also actively acting on that crush on a daily basis,” she noted, before revealing her actual celeb crush, which Armisen understood. “We watched Viggo Mortensen together in Eastern Promises and mama mia!” she said. “I sat there with Freddie and I took screen grabs and I told him that they were for research. I was researching a future picture I have not yet written. Again, I love my boyfriend, but Viggo in the Eastern Promises — really he looks good in and out of his clothes.”

On April 15, Lyonne confirmed that she and Armisen had broken up but remained close friends in an interview with The Hollywood Reporter, attributing their split to a very unexpected amenity. “I honestly think we broke up because I wanted a swimming pool,” she said. “We love each other just about as much as two people can love each other and we’re still talking all the time, but Freddy doesn’t like a swimming pool.”

It’s not known when the former couple split, but Lyonne confirmed that they quarantined together during lockdown, which is when she discovered the joys of swimming in your own pool. Apparently, it was a dealbreaker for their relationship. “It might seem like a mundane reason for a breakup, but during that pandemic, you’ve got to get your laps — I’m like Burt Lancaster in The Swimmer,” she said. “So, I got myself a house with a pool out in Los Angeles.” Armisen has not commented on the split or his apparent disdain of pools.

This article was originally published on Jan. 5, 2020