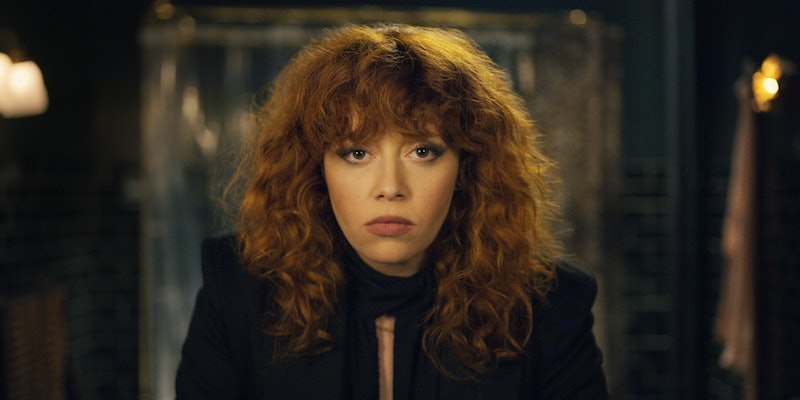 A beloved Schitt’s Creek alum will be stepping into the perplexing world of Russian Doll when the popular Netflix original returns for Season 2. On March 9, TVLine reported that Annie Murphy had joined the cast for its upcoming season. Although no details about her character have been revealed yet, the creative possibilities will be fun to ponder as the premiere date inches closer and even more set photos are released (check out the first one below).

Here are the details on Russian Doll Season 2’s plot, premiere date, cast and everything else that has been announced so far:

It’s been just over two years since Russian Doll first premiered on Netflix, so if you haven’t rewatched in a while, you may be wondering, what’s going on again? The thing is, nothing much — or at least, we didn’t leave Nadia (Natasha Lyonne) and Alan (Charlie Barnett) in the middle of any more timeline-hopping chaos. The first season wrapped on a triumphant note, with both characters having helped each other escape their doomed fates and grapple with the personal struggles that got them there.

It seems like the story wrapped up nicely, so it may be a surprise to some viewers that there was more in store when Season 2 was announced in June 2019. However, it wasn’t a shock for the series’ creators, including Lyonne herself, who told The Hollywood Reporter, “I definitely have ideas ranging from the really kind of out-there anthology to staying on board with our friend Nadia.”

Though the show was originally pitched as a three-season storyline, we don’t know exactly what the writers have in mind. Fans of the show will have to wait and see if the second season focuses entirely on Murphy and her own journey or if she will support the current cast on their continued time loop antics.

Based on the trailer of Murphy’s new AMC series, Kevin Can F**k Himself, which premieres this summer, the actor seems to be just at-home in oddball environments as she was in the charming town of Schitt’s Creek. That’s great news for Russian Doll because while her character arc remains a mystery at the moment, we can assume it’ll be a bizarre one.

In addition to Murphy, Carolyn Michelle Smith (House of Cards and How to Get Away with Murder) will have a role in Season 2 along with Sharlto Copley (District 9), Deadline reported. We don’t know who else will star on Russian Doll Season 2, but when the rest of the cast is finally announced, the presence (or absence) of key characters like Alan could serve as plot clues.

Russian Doll Season 2 is in production now, as evidenced by photos taken of Lyonne and Murphy wearing stylist black coats and shades while on set. Though we still don’t have specific details about Murphy’s role, the March 25 photos include classic cars in the background, possibly hinting at a time-travel element.

Location Vacations, a filming locations website, reported that Russian Doll Season 1 began filming in February 2018, and the series premiered one year later. So, Season 2 could come out around this time in 2022.

This post will be updated with the trailer as well as additional plot and cast details as more information on Russian Doll Season 2 becomes available.