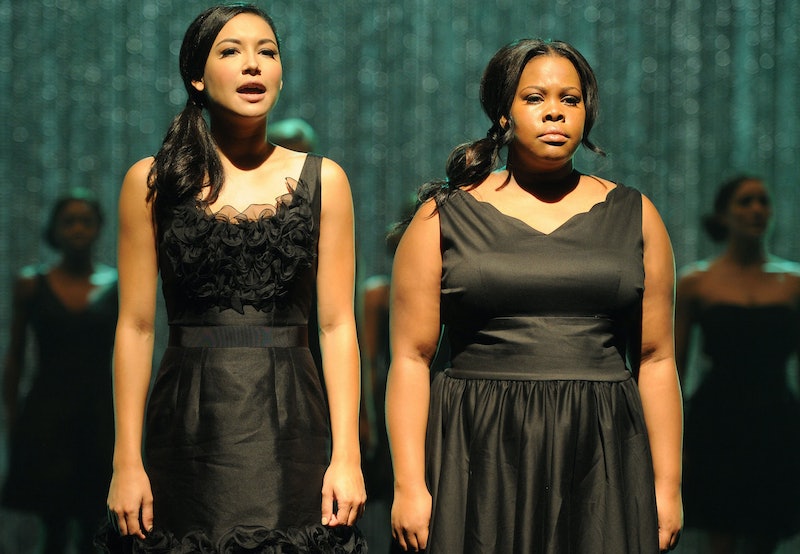 Naya Rivera's famous friends are making one thing clear: their choice to remain quiet doesn't mean they're not supporting the search for the missing actor. After days of abstaining from social media, a few of Naya Rivera's Glee co-stars explained their silence on her disappearance in a series of tweets posted on Sunday, July 12. And they all carry the same sentiment: fans should focus on Rivera's family, not their Twitter profiles.

Rescue teams have been searching for Rivera since she went missing after a boat trip at Lake Piru in Ventura, California on Wednesday, July 8. Her four-year-old son Josey Dorsey was found sleeping alone and wearing a lifejacket on a rented pontoon boat. He reportedly told investigators that Rivera went swimming but "did not come back up" to the boat, where an adult-sized lifejacket was also found. “Indications are that we believe she did go in the lake," Eric Buschow, spokesman for the Ventura Sheriff's Office said, as per Digital Spy. “This may well be a case of drowning." The search has since been turned into a "recovery" mission.

Many of Rivera's famous co-stars, including her Glee love interests Heather Morris and Demi Lovato, have posted messages of hope and support in reaction to the tragic news. But other Glee cast mates have remained silent online, a move which some fans have criticized. In response to the backlash, Amber Riley took to Twitter and explained that many Glee alumni are staying silent so as not to divert attention from Rivera's family and the rescue efforts. "Show some respect," she wrote. "All our energy is going toward helping find Naya and praying for her safe return and for her family. No one owes anyone online a performance of grief."

"This is very real and devastating," she continued. "Focus on Naya and her family. Not us. We don't matter right now." Fellow co-star Kevin McHale retweeted Riley's post and emphasized that the focus should be on Rivera's family right now. "I cannot begin to understand what Naya’s family must be feeling," he wrote. "I know the rest of us are completely shattered, but not without hope. Please respect her family & their privacy in this moment. Please refrain from judging those who don’t show their pain on social media."

The tweets come after another one of Rivera's Glee co-stars, Lea Michele, deleted her Twitter account. She has stayed mostly silent on social media since Glee co-star Samantha Marie Ware spoke out about Michele's alleged on-set behavior, which she apologized for on Instagram. While no reason has been given for the deletion, some are speculating that it's due to alleged bullying of Michele in the wake of Rivera's disappearance, with some fans even claiming that people commented on her social media that it "should've been" Michele instead.

No developments were made in the search for Rivera over the weekend, but fans have been warned against conducting their own searches on Lake Piru, which Morris had been trying to organize, due to the lake's conditions. Rescue teams will continue looking for Rivera “at least through Tuesday," as per PEOPLE.

More like this
Taylor Swift Visited The 'Glee' Set For This Bizarre Season 5 Episode
By Grace Wehniainen
Who Is Murray Bartlett Dating? 'The Last Of Us' Star Is Extremely Private
By Alyssa Lapid
Twitter Is Having A Meltdown Over Buying Beyoncé Renaissance Tour Tickets
By Jake Viswanath
The Beyhive Is Mad At Harry Styles After Beyoncé’s Album Of The Year Snub
By Jake Viswanath
Get Even More From Bustle — Sign Up For The Newsletter
From hair trends to relationship advice, our daily newsletter has everything you need to sound like a person who’s on TikTok, even if you aren’t.