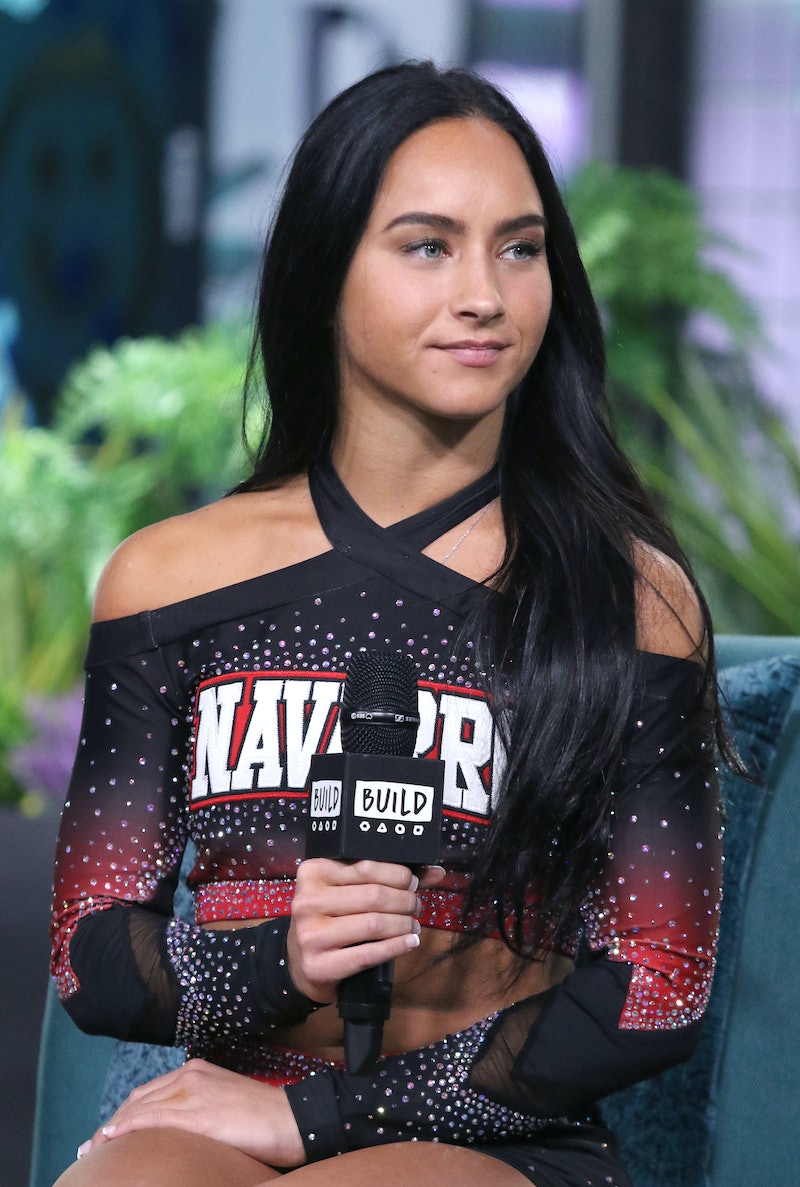 Season 1 of Netflix’s Cheer followed the 40 members of Navarro College’s nationally-ranked Bulldogs Cheer Team in Corsicana, Texas, as they trained to compete in the coveted NCA National Championships in Daytona Beach, Florida. Over the docuseries’ inaugural six episodes, viewers watched coach Monica Aldama choose the team’s 20 best-performing competitors, many of whom went onto become bona fide celebrities as seemingly the whole world streamed Cheer upon its January 2020 release.

But one team member emerged as the series’ shining star: Gabi Butler, who had already reached “cheerlebrity” status after cheering for teams across the country since childhood. After two years at Navarro, she announced she’d be moving on in the Season 1 finale, only to later pop up again in Cheer Season 2. With the second season’s Jan. 12 arrival on Netflix, let’s see what Gabi’s been up to since viewers last caught up with her.

Born in Boca Raton, Florida, 23-year-old Gabi has cheered competitively since she was 8 years old and is known for her flexibility and flying talents, as chronicled in Season 1. Before joining the Navarro Bulldogs, she was a cheerleader for several teams including California All-Stars SMOED (aka “small” and “coed”), during which she appeared on AwesomenessTV’s YouTube series Cheerleaders as a series regular from 2012 to 2014.

Cheer Season 1 saw local Corsicana cheerleaders of all ages fawning over Gabi, partially due to her YouTube channel, where she shares cheer videos, tutorials, and other personal clips with her 107,000 subscribers. Since Season 1 first aired, she’s posted over 40 videos to her page — each amassing thousands of views — and one even teased her appearance in Season 2 of the Netflix series despite graduating from Navarro College. Gabi also keeps in touch with her supporters through her ultra-popular Instagram account, which currently boasts more than 1.8 million followers and features cheer videos, selfies, and sponsored posts.

Gabi Butler Moved On To Compete For Other Teams After Cheer

Speaking to Elite Daily shortly after the premiere of Cheer, Gabi revealed she’d joined a competition squad in Miami called Top Gun All-Stars, but she also opened up about her future beyond cheerleading. “I don’t know how much longer I’m planning on cheering because, I’m not old, but I’ve been cheering for a really long time. So after a while, my body is not as fresh as it was,” she told the publication. “I actually used to talk about being a stunt double. ... That’s something I would absolutely consider.”

While she left Navarro, the door wasn’t closed between Gabi and her tight-knit former teammates. “I talked to Monica, like, if someone was to get hurt or if she needed somebody to step in, I just kind of [told] her, like, ‘I’m always here for you. If you need backup, I will be here,’” she explained.

Sure enough, Gabi’s days in Corsicana weren’t over. In late August 2020, she posted a photo of herself in Navarro gear, writing, “So ready for this season.”

A month later, Aldama spoke to Hollywood Life about how Gabi was able to return, explaining that the canceled 2020 season gave her athletes an extra year of eligibility. “They don’t use their eligibility unless they actually compete, so some did come back that would have probably not, like Gabi Butler,” the coach said. It seems fans have one thing to thank the pandemic for.

Despite revealing her potential post-cheer plans, Gabi’s not leaving the mat just yet. In a July 2021 interview with HollywoodLife, she opened up about her potential next cheerleading move. “I just tried out for Weber State, based in Utah, so I might be going there, which I’m super, super excited about,” she said. “Because of COVID, they gave everyone one more year of eligibility and I watched Weber and they were just an amazing team and this year they came out with insane skills. So I really was intrigued and I wanted to learn more.”

As of October 2021, Gabi is officially a member of Weber’s Wildcats, according to the university’s website. “The talent here is just like on another level of insane,” she said in an interview. “It’s almost like you’re watching an action movie and all these crazy things are happening. It’s like the Avengers, literally.”

Elsewhere in the interview, Gabi detailed how her cheerleading experience has been elevated since joining the squad. “I used to not like game day at all, but at Weber State, the games are genuinely so much fun. I actually enjoy cheering at the games,” she said. “We get a crowd, and they love our energy, so let’s give it back to them. I am so, so proud to be a Wildcat.”

More like this
Andy Cohen Apologized To Larsa Pippen After A 'RHOM' Season 5 Reunion Dust-Up
By Brad Witter
'Bling Empire: New York’ Star Tina Leung Has A Superhero Alter-Ego
By Alyssa Lapid
Brittany Snow Files For Divorce From Tyler Stanaland After 'Selling The OC' Drama
By Grace Wehniainen and Radhika Menon
Here’s Why Danny Masterson’s Hyde Isn’t In 'That '90s Show'
By Brad Witter
Get Even More From Bustle — Sign Up For The Newsletter
From hair trends to relationship advice, our daily newsletter has everything you need to sound like a person who’s on TikTok, even if you aren’t.