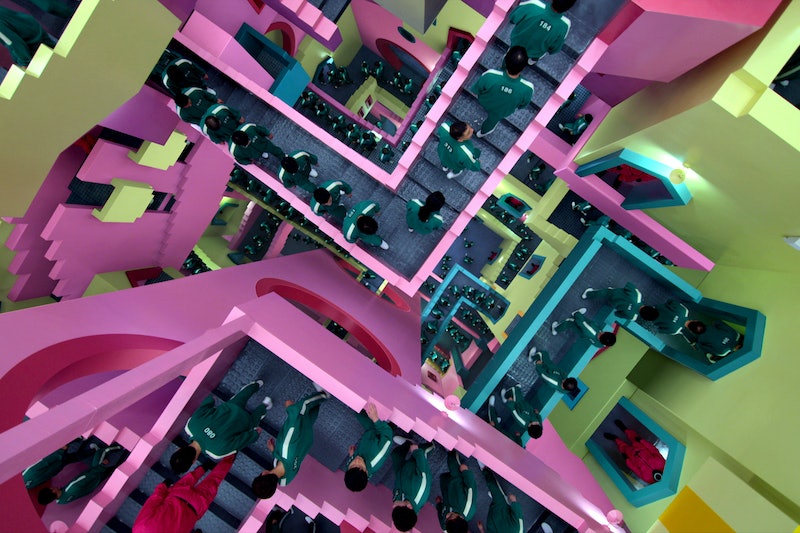 Netflix is home to plenty of hidden gems and slept-on series, but Squid Game is decidedly not one of them. The Korean thriller debuted on Sept. 17, and Netflix co-CEO Ted Sarandos has high (and well-founded) hopes for the series, telling the Vox Media Code Conference that there’s “a very good chance it's going to be our biggest show ever.” That honor has been held by Bridgerton thus far — and much like the sultry regency romance before it, Squid Game is spreading via word-of-mouth wildfire.

While the smash hit is great for Netflix — and anyone who likes a riveting story — the scale of Squid Game’s popularity has not been without hiccups. For starters, there’s the man in South Korea whose phone number was featured in the show and is now receiving “around 4,000 calls a day,” per the South China Morning Post. And the latest downside of Squid Game’s immense popularity? A lawsuit against Netflix from South Korean internet service provider SK Broadband.

According to a report from Reuters, the provider is seeking “pay for costs from increased network traffic and maintenance work because of a surge of viewers,” as of Oct. 1 — right as we enter peak-Squid Game times. Specifically, SK claims that its Netflix traffic this September was 24 times higher than in May 2018. Though a Seoul court previously determined Netflix should compensate the ISP, the streamer argued that its “duty ends with creating content and leaving it accessible,” per Reuters.

If you haven’t watched yet (it’s almost inevitable at this point), Squid Game revolves around people with a desperate need for cash — and an unconventional way to get it. They simply need to compete in a series of childhood games, but they soon learn in a Hunger Games-esque twist that they either win or find themselves no longer alive.

The high-stakes series is being lauded for its blend of thrills and cultural analysis. Finding ‘Ohana screenwriter Christina Strain, who grew up in Seoul, South Korea, described it as “a perfect example of how you do social commentary using genre,” pointing to such specifics as the players’ nationalities and the deadly games’ inaugural year, 1988, as significant, history-laden details. (If you have already seen Squid Game and are waiting for a second season, Strain’s thread will give you plenty of reasons to rewatch.)

The Black List founder Franklin Leonard also celebrated the show’s success in the entertainment landscape, noting that it would have been considered “particularly strong American remake fodder,” as opposed to a hit on its own merit, even a short time ago. “It’s a glorious thing that we live in a world where the show is becoming as popular as it is just as it was made by its Korean creators,” Leonard wrote.