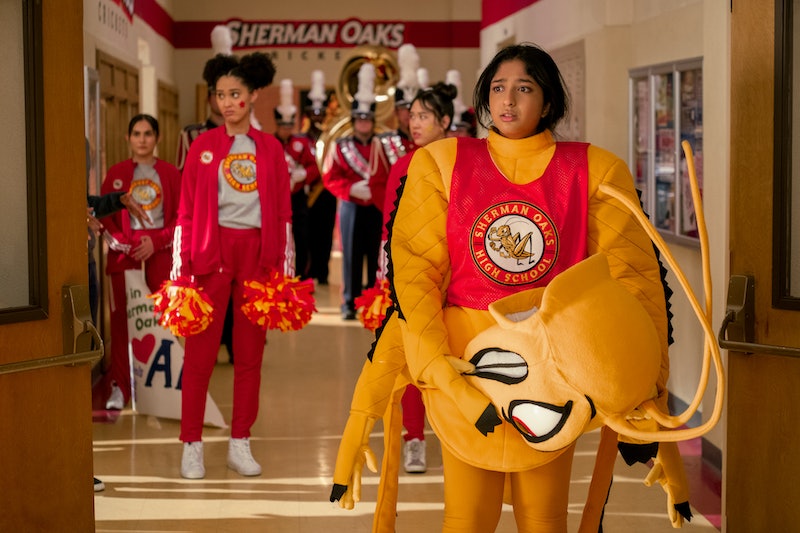 Spoilers ahead for Never Have I Ever Season 2. No one manages to “Devi” things up quite like the tempestuous protagonist of Netflix’s hit teen drama Never Have I Ever, but no one apologizes quite like her, either. In the show’s second season, Devi Vishwakumar’s hijinks got her into bigger trouble than ever, and as a result, she attempted an over-the-top public apology, complete with the Sherman Oaks High School marching band and mascot. The cricket dance made for another memorable moment in the standout series, and star Maitreyi Ramakrishnan let fans know that yes, that was her in there.

Season 2 debuted on Netflix on Thursday, July 15 and quickly hit No. 1 on the streamer in countries around the world. As viewers raced through the 10 episodes and enjoyed Devi’s latest misadventures in love, grief, and growing up, Ramakrishnan took the time to clarify that she had not used a dance double for the scene in which Devi horrifically bungles her apology to new student Aneesa (Megan Suri) for spreading gossip about her. Posting behind-the-scenes photos and video from the set, the actor wrote, “For anyone who thinks that it wasn’t me in that cricket costume… SWIPE.” The video shows her dancing with co-stars Lee Rodriguez (Fabiola) and Ramona Young (Eleanor) as they prepare to shoot the awkward yet hilarious sequence.

Friends and fans alike applauded her efforts, including Rodriguez, who commented, “AND YOU KILLED IT!!” The official Never Have I Ever Instagram account added, “Sh*t that routine slaps.” Meanwhile, numerous others commented that they’d already finished Season 2 and were already eagerly awaiting Season 3. “PLEASE I NEED SEASON THREE,” wrote one fan. Another echoed that sentiment, writing, “GIRL literally just finished the show … You and the cast did an amazing job — Obsessed with this season + need a S3 ASAP.”

The second season brought much of the charm of Season 1, plus some fun new elements. Aneesa, the object of Devi’s apology, was one of them. She showed up at Sherman Oaks and gave Devi the opportunity to see what friendship with a fellow Indian American was like. Unfortunately, she also had the misfortune of inspiring Devi’s envy when she caught the eye of Ben (Jaren Lewison), Devi’s nemesis-turned-ex-boyfriend. After Devi saw sparks flying between them, she inadvertently started a rumor about Aneesa having an eating disorder that was actually true.

Given the damage Devi did, her grandiose apology was all wrong. Still, the attempt was entertaining (albeit in an extremely cringe-worthy way) for viewers. Twitter soon became an outlet for fans who needed to express their secondhand embarrassment. “Oh my god i physically cannot watch this marching band apology thing that devi is doing,” wrote one. “I am cringing so hard why did she think this was a good idea.” Another shared they were “on the floor” because of it.

With this latest wild season complete, there is still room left for Never Have I Ever Season 3. Netflix hasn’t made an official announcement, but that is not surprisingly considering the company often holds off on renewals for several weeks following a new season’s premiere. In the meantime, Ramakrishnan has earned the right to celebrate her job well done, and fans have their fingers crossed that she’ll get the chance to top the cricket dance in future episodes.

More like this
Here’s Everything Coming To & Leaving Netflix In October
By Jake Viswanath
Caleb McLaughlin Details Racism From 'Stranger Things' Fans
By Radhika Menon
The ‘Emily In Paris’ Season 3 Release Date Is Here, Plus The First Footage
By Bustle Staff
'House Of The Dragon’s Theo Nate Is A “Massive” 'GoT' Fan
By Maxine Harrison
Get Even More From Bustle — Sign Up For The Newsletter