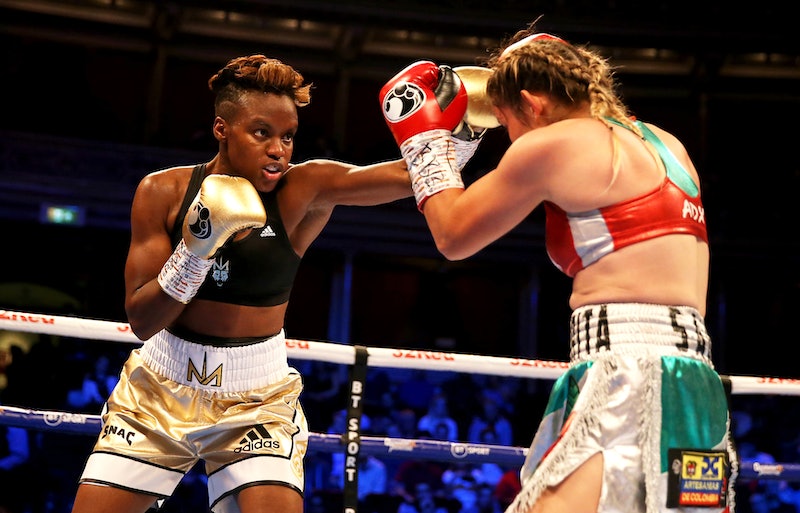 With two Olympic medals under her belt and now set to be the first person to dance with a partner of the same gender on Strictly Come Dancing, Nicola Adams is nothing short of a national treasure. But in a recent interview, the now-retired professional boxer has revealed that, while she's happy to be part of progress, she still believes women’s sport still isn't taken as seriously as men's.

Speaking to the Guardian, the 37-year old got honest about the sporting industry. Adams explained that, although women’s football and boxing are both "getting a lot more coverage and being taken a lot more seriously than they were, there's "still got a long way to go."

Adam’s opened up about the sexist remarks she heard throughout her career, including from coaches in other gyms. “'Women should be in the kitchen cooking.’ You’d hear comments like that all the time,” she said.

Professional boxing was banned for women in the UK until 1998 when the British Boxing Board of Control (BBBC) finally gave women the licence to fight. This ban was still in place when Adams was training as a teen. Boxer Jane Crouch became the first professional women's boxer after taking the BBBC to court.

Despite the change in law, Adams said the women’s teams were still treated completely differently even many years after. “There’d be 10 girls on the team and they’d send us away [to competitions] with two boxing kits," meaning they were left to put on sweaty kits. “It was ridiculous. The guys would have everything – physios, doctors, whatever they wanted," Adams explained to the Guardian.

“We just wanted to be treated fairly and equally,” she said. “They always used to say: ‘Well, the more medals you win, the more funding you’ll get.’ But it was a catch-22 – how do you go away and win medals when you don’t give us the training that we need?”

Adams' comments come not long after a news story about the England women's football team. On Sept. 3 it was revealed that this year marked the first time the England men's and women's teams would be paid the same amount. But despite the parity in match fees and bonuses, a vast difference remains between tournament prizes. As the Telegraph reports, England’s women stood to take home £50,000 each had they won last year’s World Cup whereas the men would have got £217,000 each.

Nicola only turned professional in 2017 but rose to fame during the London 2012 Olympics, where she won a gold medal. She went on to defend that title at the Rio Olympics in 2016. Adams announced her retirement in November 2019 due to a serious eye injury.

And now she will be making history again, this time shifting from the ring to the ballroom. Adams, who identifies as a lesbian, has revealed that she told the BBC she would only go on Strictly Come Dancing if her dance partner was a woman. “I guess it’s just breaking those boundaries and showing people that it’s OK,” she told to the Guardian. "It’s not such an uncommon thing: professional dancers dance with people of the same sex all the time." Graziano Di Prima and Johannes Radebe were the first same-gender couple to dance together on the show last year.