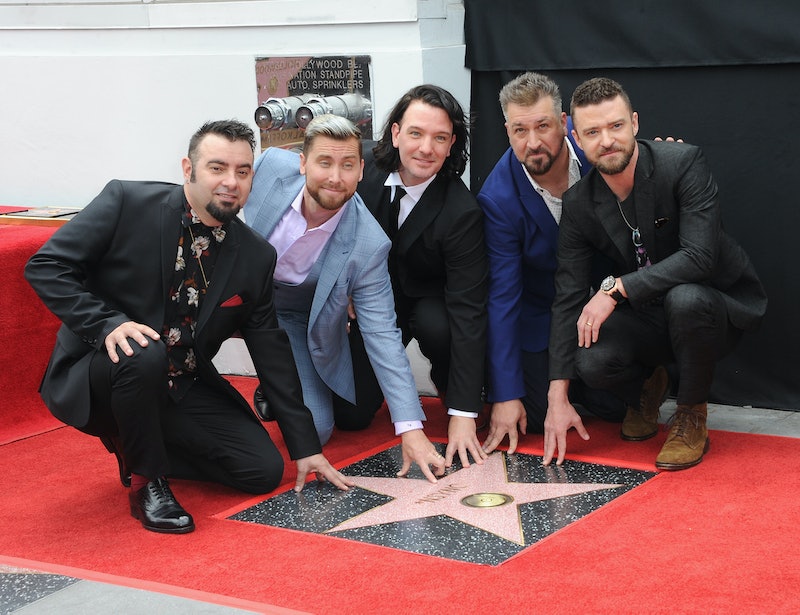 No matter where they go, the member of *NSYNC will always be in sync. Lance Bass, Joey Fatone, and Chris Kirkpatrick had a mini *NSYNC reunion at the wedding of Ryan Cabrera, meaning his big day was the epicenter of early 2000s nostalgia. The “On the Way Down” singer got married to WWE star Alexa Bliss on April 9, and to help him say “Bye Bye Bye” to bachelorhood, the *NSYNC alums performed their smash hit from 2000 at the reception.

On April 12, Bass posted a video of the moment on Instagram, which happened “a few drinks into the wedding” according to his caption. The bride joined Fatone, Kirkpatrick, and Bass to do the iconic “Bye Bye Bye” choreography. Kirkpatrick was the first to flex his vocal cords on the song’s bridge, before everyone else joined in for the final chorus. Their bandmates JC Chasez and Justin Timberlake were not present at the wedding.

“Who said a Boyband couldn’t have a kick ass girl (In a wedding dress),” Bass captioned the post. “Congrats @alexa_bliss_wwe_ and @ryancabrera on your special day. I highly suggest everyone attend a party that is half wrestlers and half pop stars. It’s quite a night! #WelcomeToTheShitshow #ByeByeBye single life.”

After *NSYNC split in 2001, all five members have only reunited for a proper performance once, as part of Timberlake’s 2013 VMAs medley after he won the Video Vanguard Award. However, the boy band has reunited for special occasions over the years. In 2018, all five members came together when *NSYNC got a star on the Hollywood Walk of Fame. The next year, Chasez, Bass, Fatone, and Kirkpatrick joined Ariana Grande at Coachella to perform their hits “Tearin’ Up My Heart” and “It Makes Me Ill,” which was sampled on Grande’s hit “Break Up With Your Girlfriend, I’m Bored.”

Perhaps most importantly, Fatone and Kirkpatrick met up with Bass in November to meet his newborn twins, Violet Betty and Alexander James. “Two of the best dads I know,” Bass captioned an Instagram photo of his bandmates holding the babies. Maybe those two will spearhead the next great pop group.

More like this
Britney Spears Shares & Deletes Photos Of Justin Timberlake From 22 Years Ago
By Jake Viswanath
Twitter Can’t Believe The Madonna Biopic Is Scrapped & Fans Have A Solution
By Alyssa Lapid
Hilary Duff's Husband Matthew Koma Has Her Name Tattooed On His Butt
By Jake Viswanath and Stephanie Downs
Prince Harry Incorrectly Recites Christina Aguilera’s “Genie In A Bottle” Lyrics
By Jake Viswanath
Get Even More From Bustle — Sign Up For The Newsletter
From hair trends to relationship advice, our daily newsletter has everything you need to sound like a person who’s on TikTok, even if you aren’t.