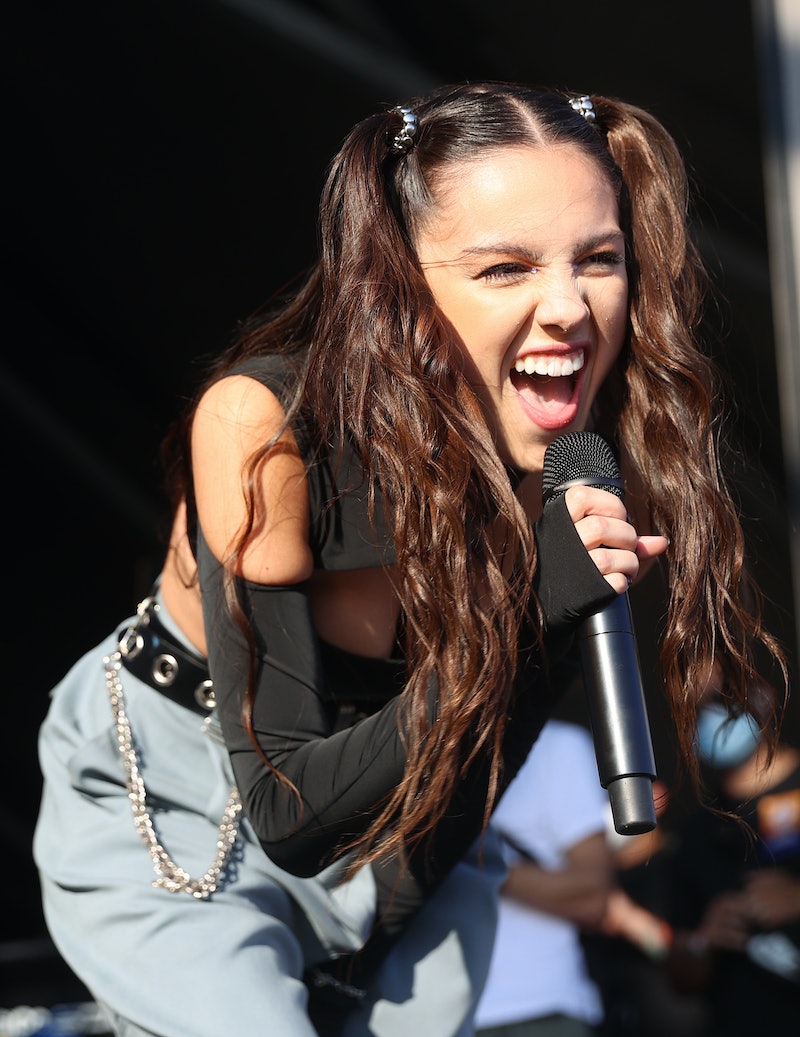 From her high-energy performance and multiple Moon People wins at the MTV Video Music Awards to her stunning Met Gala debut, it’s been a pretty busy week for Olivia Rodrigo — and she didn’t slow things down for her Sept. 18 slot at the iHeart Radio Music Festival. Before heading on stage to perform selected hits from her record-breaking Sour rollout, the High School Musical: The Musical: The Series star took to her Instagram story to share an up-close look at her unique good luck charm: a Breaking Dawn bracelet, with a pendant from the Twilight film’s logo hanging off a metal chain. (Spoiler alert: Rodrigo didn’t really need luck to deliver a memorable performance — but it still added fun flair to her big show.)

The chunky piece of jewelry paired perfectly with Rodrigo’s pop-punk look on stage as she belted out her oeuvre of breakup songs, including “Traitor” — which, she suggested on Twitter in May, would definitely have been werewolf Jacob Black’s favorite song from her debut album. That’s right: Rodrigo is as unconditionally and irrevocably obsessed with Twilight as you were in your teens (or are currently). And, as it turns out, her iHeart look is actually not the first time she’s been vocal about her status as a steadfast Twihard.

In an Aug. 4 Instagram photo dump, Rodrigo posted an image of a T-shirt that made it clear just how much she loves the film series adapted from Stephenie Meyer’s hit YA vampire romance novels. The shirt not only featured Robert Pattinson’s face, it bore the long message: “I think the Twilight movies are AWESOME!!!!! If you don’t think that makes me SEXY and COOL, DON’T FREAKING TALK TO ME!!!!! I am not even kidding.” Prior to that, on June 24, she showed off yet another piece of Twilight clothing, sharing a #OOTD-style post that included a close-up of a shoulder bag with Bella and Edward on it.

It seems there’s no limit to her love for the franchise. In a March 2020 tweet, Rodrigo described the movie’s soundtrack as her favorite album. The “Drivers License” singer also apparently finds inspiration in the films’ moody, star-crossed romance (relatable), and once even solved a case of writer’s block by “writing a pop song about Bella Swan moving to Forks and meeting Edward Cullen in a science lab,” she wrote on Instagram in August 2020, per Teen Vogue.

Basically, we can all take a few notes from Rodrigo — whether you’re a fellow Twihard or simply want to rep your respective fandom the fullest.