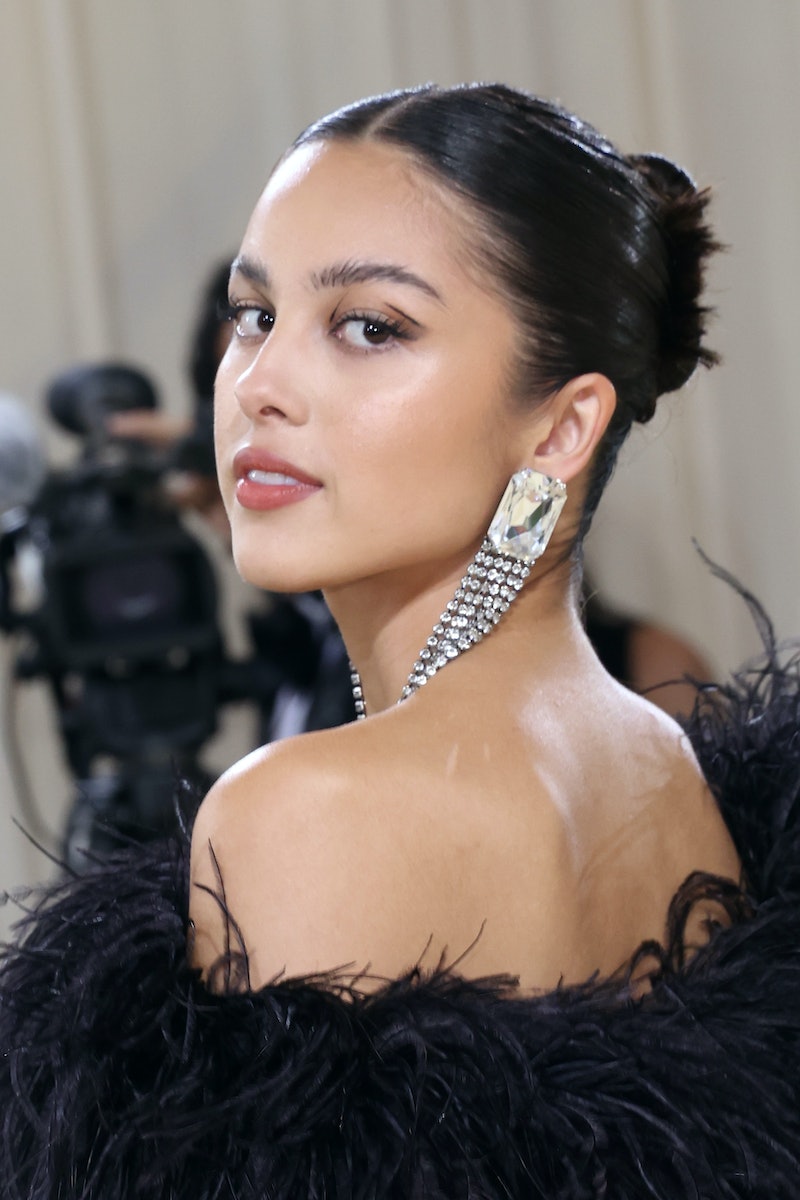 After her three wins at the VMAs on Sunday, September 12 (she took home silver moonmans for Song of the Year, Best New Artist, and Push Performance of the Year), Olivia Rodrigo arrived at the 2021 Met Gala last night in a sleek updo worthy of its own award.

For her first-ever appearance at the tony, fashion-filled affair, the “Drivers License” crooner opted for black, sheer-lace jumpsuit by Saint Laurent that featured an off-the-shoulder feathered trim. Accessory-wise, Rodrigo went for diamond bracelets and larger-than-life diamond earrings. (Considering the hot pink butterfly earrings she just wore to the VMAs, there seems to be a maximalist jewelry theme here.)

On the makeup front, the singer commissioned celebrity makeup artist Molly Greenwald to give her fluffy, groomed brows, punk-inspired graphic eyelids, and a just-bitten bout. But it was Rodrigo’s chic hairstyle that really stole the show.

With a Gen Z-friendly middle part, Rodrigo’s locks were pulled back mid-level and twisted into knots that spiked out at the ends. The look was crafted by her longtime hairstylist Clayton Hawkins, who tells Bustle over email that “Olivia was inspired by the American punk movement, so we wanted to do a nod to that while keeping it clean and beautiful.”

In order to create the style, Hawkins says he started out brushing out her damp hair with the cult favorite Tangle Teezer Ultimate Detangler and applying Oribe Supershine Moisturizing Cream from the mid-shafts to the ends.

Next, the pro blow-dried her hair straight with the Dyson Supersonic before straightening her locks in small sections. He then coated her strands with Oribe Gold Lust Nourishing Hair Oil, raking it through using the Tangle Teezer Ultimate Finisher for added smoothness.

He then created several knots on the back of her head, securing them tightly with “a lot of bobby pins” and letting the ends fan out on the sides for a cool effect. Finally, Hawkins spritzed her hair with Oribe Superfine Hair Spray to lock everything into place, completing the look with more hair oil which he smoothed onto her hairline with his palms for a reflective sheen.

“We had fun and didn’t rush with glam,” Hawkins says. “It was such an honor to be part of her first Met Gala.”