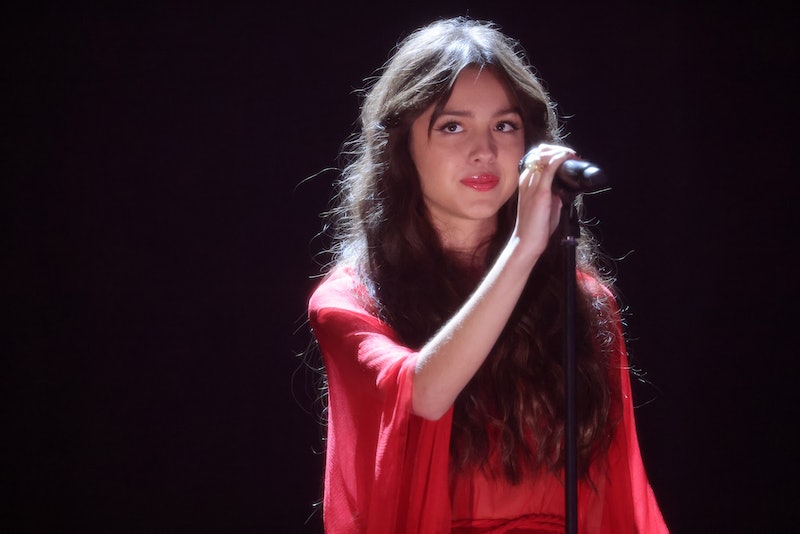 All eyes were on Olivia Rodrigo as she made her debut appearance as a musical guest on Saturday Night Live — but there was a subtle yet huge detail that even her biggest fans may have missed. The singer performed her mega-hit “Drivers License” on the May 15 episode, and while her vocals were stunning as expected, many fans immediately noticed her necklace, which only proves that the song’s lyrics truly came from her heart.

Rodrigo started off her performance by singing the first verse with just a piano backing, letting her delicate vocals take center stage, before the full band kicked in and the anguish in her voice grew to new heights. However, before she even sang the iconic bridge, many fans noticed that her necklace read, “I still f*cking love you,” matching one of the songs most notable and cutting lyrics.

While some fans may speculate that she’s sending a message to Joshua Bassett, her High School Musical: The Musical: The Series co-star and the song’s rumored subject, it’s likely that she’s simply just celebrating the massive success of “Drivers License,” which spent an impressive eight weeks at No. 1 on the Billboard Hot 100. Rodrigo has sported a similar locket on Instagram, making it a sentimental must-have for fans.

For her second number of the night, Rodrigo performed her latest single “Good 4 U” live for the first time, and while she didn’t light anything on fire like in the now-iconic music video, she still brought out the song’s anger onstage. Switching to a high school-appropriate plaid get-up, Rodrigo’s voice slowly built up from simmering madness to petty brattiness until she fell to the floor in all-out rage during the song’s final moments. If Rodrigo’s breakup anthems didn’t make it clear enough, her SNL performances gave any potential suitors at least two reasons never to break her heart.

More like this
Michael B. Jordan Tackled His "Public Breakup" With Lori Harvey On 'SNL'
By Brad Witter
The Black Lotus Staff Has "Had Enough" In The 'White Lotus' Spoof From 'SNL'
By Brad Witter
Linda Ronstadt’s “Long Long Time” Plays A Pivotal Role In The Last Of Us
By Brad Witter
Who Is Pete Davidson Dating? He & Chase Sui Wonders Got Caught Kissing
By Jake Viswanath
Get Even More From Bustle — Sign Up For The Newsletter
From hair trends to relationship advice, our daily newsletter has everything you need to sound like a person who’s on TikTok, even if you aren’t.