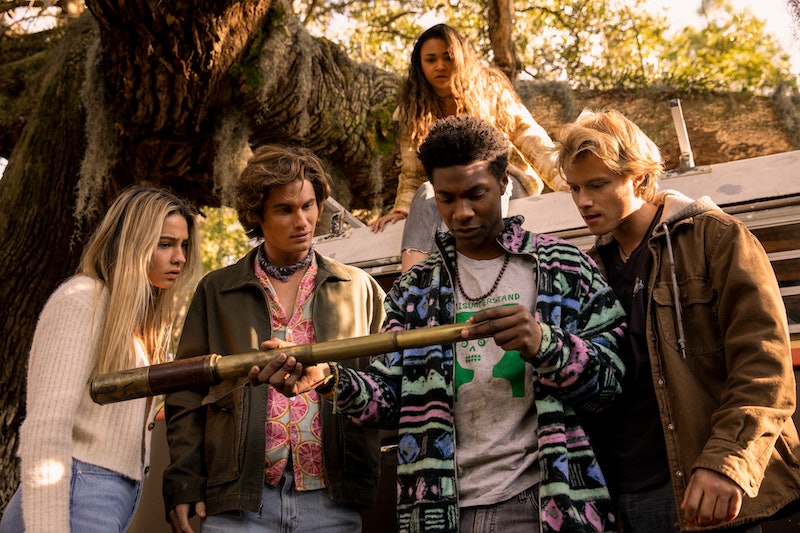 Outer Banks’ second season concludes with several loose ends. The Pogues are stuck on an unidentified island, and it’s unclear how long they can survive there. Ward and the rest of the Cameron clan have made off with the Royal merchant gold and the Cross of Santo Domingo. And Carla Limbrey is still on the hunt for the mysterious “shroud” she believes can heal her illness — which she’s intent on finding with the help of John B’s dad Big John, who is revealed to be very much alive in the final moments of the season.

Though Netflix has yet to confirm that Outer Banks will return for Season 3, the creators are already working on future storylines. And there are already plenty of theories about what will happen next.

Things tend to go sideways for the Pogues, so it’s very likely that the island they’re on isn’t hospitable. Either they’re going to clash with some locals in the area, or they’re going to have another bad run in with wildlife. (Seriously, how did John B manage to survive a gator attack?)

Big John and John B Reunite

This is pretty much a given, and hopefully Big John will find a way to rescue John B sooner rather than later. It’s sure to be an emotional reunion, and connecting Big John with the teens is a good way to rev up the story early on in Season 3. He can finally explain the mythology of the treasure and hopefully point the Pogues in the direction of what sounds like an even bigger discovery.

The Pogues Split Up

John B and his friends are proud to be Pogues, but they’ve also spent two seasons chasing after the possibility of making Kook money. That conflict between staying true to their roots and getting rich will likely “generate a disagreement” within the group, Rudy Pankow (JJ) told TooFab. “There are so many things that the Pogues want. They want to live comfortably ... I think there's going to be a disagreement of how far we want to go with this, how far do we want to risk our lives for something that almost killed all of us.” He added that they’ll likely take sides or even split up based on “who's gonna go after the crazy gold and try to go for riches and who's gonna be like, 'OK, let's actually be logical about this.'“

Kiara and JJ Get Together

John B and Sarah may be firmly back together, but the Outer Banks creators have teased that there’s still plenty of drama to mine with the other teens. Specifically, they hinted at a possible romance between JJ and Kiara, as well as one between Pope and newcomer Cleo. JJ and Kie have had a will they, won’t they relationship since Season 1, and in Season 2 they were there for each other through difficult family conflicts. Pope and Cleo, meanwhile, matched wits from the very moment they met onboard the freighter.

Back at home, it’s unclear if Topper will appear in Outer Banks Season 3 at all. He’s still very much pining for Sarah, and fans on Reddit theorize he could once again use Find My iPhone to locate her.

Cleo already seems like one of the Pogues, but that doesn’t mean her past employers are done with her. Her old boss, Captain T, knows about the gold, and it’s possible he’s still set on coming after it and Cleo — especially since she betrayed him for the Pogues.

“It’s every man for themselves. But Cleo had to do what she had to do, so I anticipate maybe they would want to come after her,” Carlacia Grant, who plays Cleo, told Elite Daily.

Big John’s Past is Explored

Now that Big John is back, it’s likely that we’ll learn about how he’s connected to Limbrey. As the parents scramble to find their kids, it’s also possible that the show will explore his relationship with Ward and the rest of the Pogue parents. It’s been hinted that they all have a deep history together — Kie’s Kook mom is an honorary Pogue, just like Kie is today — and that may come into play in a big way.

Ward Dies, For Real This Time

This has to happen, right? And it would probably surprise literally no one if Rafe ends up being the one to do it, as he’s had no problem aiming weapons at both Sarah and Rose.

Pope Gets Back the Cross

There may be a continuous battle for the Royal Merchant’s treasure, but it all arguably belongs to Pope. As the descendants of freedman Denmark Tanny, Pope and his family deserve to regain the treasures that were passed down to them after Tanny was killed. It’s unclear how Pope might pull that off, but he managed to solve the prior clues that Tanny left behind, so there’s hope that he can tackle whatever comes next.

The Shroud is Real

So far, Outer Banks has been grounded in reality. But any fan of Indiana Jones will tell you that the best treasure hunting stories usually cross over into the supernatural or paranormal. What if the mythical cloth that Limbrey is searching for actually works? The characters have miraculously survived death several times over, so it’s not that far-fetched that the show could get really weird in Season 3.