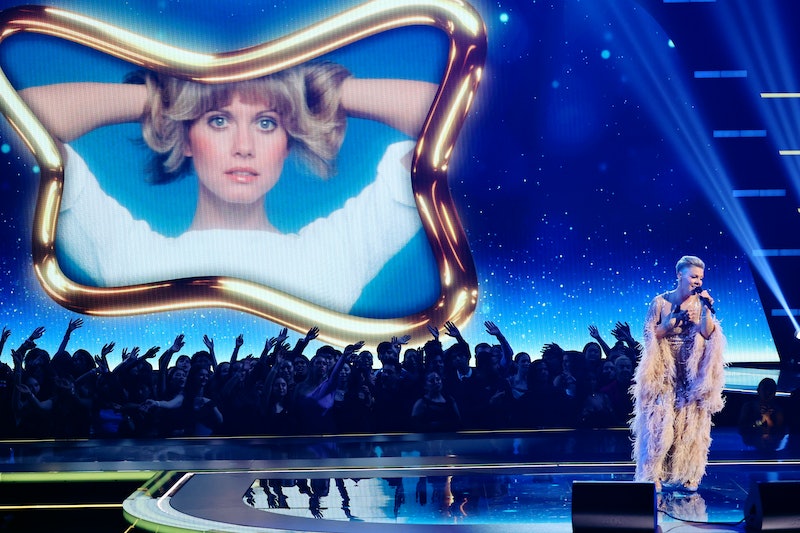 Pink is hopelessly devoted to Olivia Newton-John. The “So What” singer performed a tribute to the late Grease star at the 2022 American Music Awards on Nov. 20, and it turns out that she had a little assistance from someone special: her 11-year-old daughter Willow Sage Hart. Newton-John died on Aug. 9 at her California home after a 30-year battle with breast cancer. She was 73.

After opening the ceremony with an extravagant, roller disco-themed performance of her new single “Never Gonna Not Dance Again,” Pink returned midway through the show to pay tribute to Newton-John. Donning a sheer, sparkling gown with feathers everywhere, Pink kept things simple for this performance, belting out Newton-John’s signature Grease tune “Hopelessly Devoted to You” as photos of the Australian icon were displayed on the screen behind her. The 1978 hit was just one of Newton-John’s many top 10 hits, including five No. 1s, and received an Oscar nomination for Best Original Song.

Speaking to Entertainment Tonight on the red carpet, Pink revealed that her daughter helped her rehearse for the tribute because she already had some Grease experience.

“My daughter just got done doing Grease in her theater production, and she actually helped me learn the song,” she said. However, Willow stepped in herself to clarify that she didn’t play Newton-John’s famous role of Sandy. “It’s like a show that I’m the youngest person, so I was ensemble,” Willow said. “I did that same show last year, just Mamma Mia instead of Grease.” Along with Willow, Pink also walked the red carpet with her husband Carey Hart and their 5-year-old son Jameson.

Speaking to ABC, Pink explained just how much Newton-John means to her, saying the opportunity to pay homage was “an absolute honor” to her. “I had the pleasure of being around her several times, and she was as darling as you would imagine,” she said. “She was such an icon, and it’s a really big honor to be able to sing her [music].”