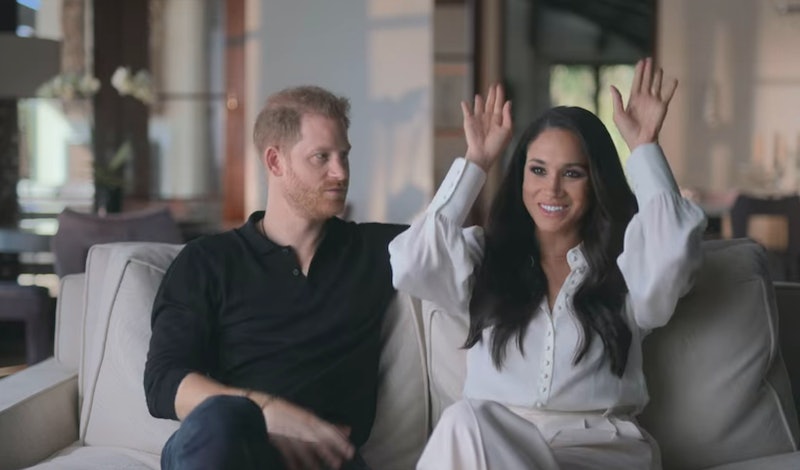 It’s finally here. The first three episodes of Netflix’s Harry & Meghan docuseries have dropped, and they say a whole lot about the royal couple. One of the most standout moments was the truth behind their first meeting, which up until this point, was believed to have been a blind date. But as the couple explained in the episode, that wasn’t the case at all.

Speaking to camera on the Netflix documentary, the couple recount how Suits had just been renewed for another season, and Markle decided that she wanted to have a “single girl summer” with her friends by travelling around Europe. “I had my career, I had my life, I had my path,” she says, before sighing deeply. “And then came H. I mean, he literally… talk about a plot twist.”

Prince Harry revealed they met over Instagram, not on a blind date. “I was scrolling through my feed, and someone who was a friend had this video of the two of them.” The first image Harry saw of Meghan was of her with the Snapchat doggy ear filter on. He later got in touch with said friend, asking if “Prince Haz” could meet her. The Duchess of Sussex had no idea who “Prince Haz” was and decided to take a look at his Instagram, rather than googling him, she said. “Let me see what they’re about in their feed, not what someone else says about them,” she explains.

After sharing a few messages, Harry instigated the first date while Meghan was in London for Wimbledon in 2016. They planned to have drinks at Soho House, but Harry was late, which Meghan couldn’t understand. He was actually stuck in traffic, but because she didn’t know who she was, she was unsure about his prerogative. That he was “one of those guys who have so much of an ego that… any girl would sit waiting for a half hour for you.” Then as he walked in, she realized that Harry was genuinely “embarrassed and late” and that he was “really sweet” about it. “He was just so refreshingly fun. And that was the thing, we were childlike together,” she said.

Meghan instigated the second date, which Harry described as being “so forward and American.” They went to dinner at the same place, and this time Meghan was late, but “only by a few minutes,” she clarified. And their third date? A week-long trip in the African plains of Botswana, which they also recount in the first Netflix documentary.

More like this
Meghan & Harry Respond To Jeremy Clarkson’s "Apology" Over *That* Column
By Sophie McEvoy
Helena Bonham Carter Doesn't Think 'The Crown' “Should Carry On"
By Sam Ramsden
Turns Out George Clooney Is A Huge Fan Of This Classic British Game Show
By El Hunt
The Spice Girls Are Set To Reunite At King Charles III’s Coronation
By Sam Ramsden
Get The Very Best Of Bustle/UK
Sign up for Bustle UK's twice-weekly newsletter, featuring the latest must-watch TV, moving personal stories, and expert advice on the hottest viral buys.