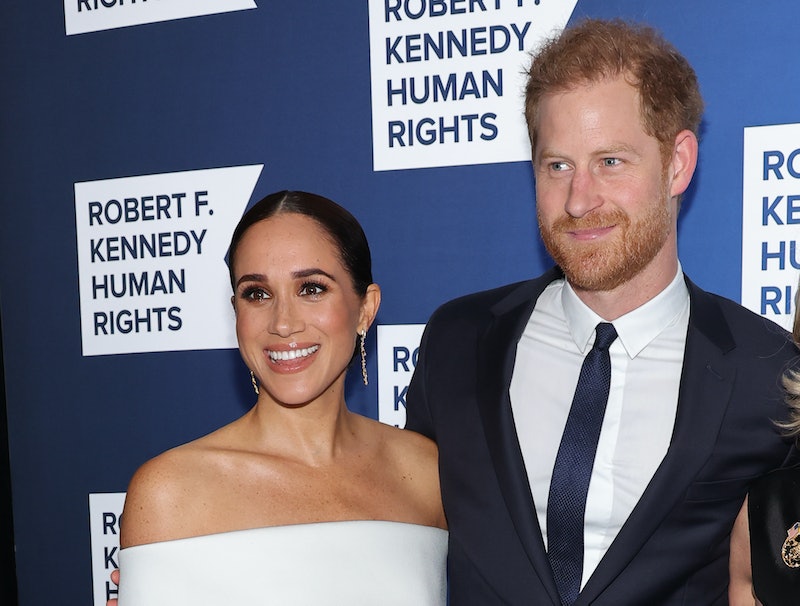 A royal title is pretty much synonymous with “rich.” And not “doing well”-rich, like, RICH rich. This is certainly true of the British royals, who rank among the wealthiest families in the world, but the past few years have seen things change in the hierarchy and the structure of the long-enduring monarchy.

In January 2020, Harry and Meghan shook the world when they announced they planned to step back from their duties as official royal family members. They claimed that they would still support Her Majesty, the Queen (also known as Harry’s late grandmother), but that they intended to find ways to become “financially independent.” Most people can’t imagine walking away from the vast riches that come with being a prince and princess, but the couple decided it was in the best interest of their kids Archie and Lilibet, and for their own mental health.

Since that announcement, the now royal-adjacent couple have continued to be tabloid fodder and make waves from their public appearances, including a high-profile sit down with Oprah and their Netflix documentary Harry & Meghan. Here’s just how much they are making from these media gigs and other contracts.

Harry and Meghan have now been financially independent of the crown for almost three years, and they have already found plenty of opportunities to bring in some cash.

The brightest and most successful in the world are often able to score huge paychecks from speaking opportunities, usually for private companies, and Harry and Meghan are probably headed down this road. Harry reportedly earned up to $1 million for speaking at a JPMorgan event in early 2020, and they could easily ask for a similar sum a few times a year.

The pair signed with the New York-based Harry Walker Agency, which counts fellow dignitaries and superstars like the Obamas and the Clintons as clients, so more speaking gigs are surely in the works. They may even embark on a speaking tour of their own, as these events have become popular among the most famous and respected in the world.

The pair signed a massive deal with Netflix in September 2020 to develop all manner of content, from unscripted programs to documentaries to children’s material and more. A new documentary about the couple, aptly titled Harry & Meghan, is due in Dec. 2022 and will be the first of these projects to hit the streaming service. The multi-year program was estimated to be worth somewhere between $100 million and a whopping $150 million.

Their production company Archewell Productions revealed plans to release a 2023 series titled Heart of Invictus, focusing on the Olympics-style international sporting event “Invictus Games” where all the competitors are wounded servicemen and women. While Netflix is surely paying handsomely for the program, all money earned by the couple for this one show will reportedly be going to The Invictus Games Foundation.

Just before 2020 wrapped, Harry and Meghan not only revealed they’d inked a major deal with Spotify to create original programs (starting with podcasts), they actually released the first episode as well. Meghan just completed the first season of her show “Archetypes,” which featured guests like Judd Apatow, Mindy Kaling, Issa Rae, and more. The three-year contract could be worth somewhere between $15 and $25 million.

In addition to everything else they have going on, the two sat down for an intense, groundbreaking interview with Oprah, one which was watched by more than 17 million people when it aired on CBS. That figure is astronomical for traditional TV, and it is greater than the latest iterations of the Oscars and the Emmys combined.

Though the couple did not get paid for their appearance (Winfrey clarified during the interview, “I just want to make it clear to everybody that you don't know what I'm going to ask and there is no subject that's off-limits and you are not getting paid for this interview”), that kind of interest in the couple indicates a high likelihood for more TV time for the couple. There’s no telling how much they’ll be paid for future gigs now that they’ve shown they can attract more viewers than even the most popular of regular shows.

2 Ways Prince Harry Makes Money On His Own

In addition to their busy schedule as a couple, both Harry and Meghan are earning money on their own as well, and they have both taken on big projects and claimed important titles that will add to their growing net worth.

In March 2021, a San Francisco, CA-based startup that focuses on mental health called BetterUp shared that it had partnered with Harry and given him the title of chief impact officer. Harry has been very open about his struggles with his own mental health, and it seems to be a perfect fit between the two, especially since the Silicon Valley organization has deep pockets. While a figure wasn’t revealed, it appears that the former royal could be claiming a seven-figure payday as he helps countless people connect with coaches and counselors to better themselves.

Before he and his wife signed with Netflix, Apple announced it had secured a deal with not just Harry, but Oprah as well. Back in 2019, the tech giant shared that the two powerhouses would create a documentary show for its AppleTV+ streaming platform titled The Me You Can’t See, which would also focus on all things mental health. The limited series was released in May 2021, and it made headlines all around the world as the two, as well as fellow celebs like Lady Gaga and Glenn Close, talked candidly about their struggles and past trauma.

Harry’s book contract made waves when it was announced in 2022. The memoir titled Spare is due out in January 2023 and will cover the former Duke’s “personal journey from trauma to healing.” Harry was reportedly paid $20 million by Penguin Random House for the publishing rights, some of which will be donated directly to charitable organizations including Sentebale and WellChild.

Rumor has it that Spare is just one of a four-book deal, where another book will be a collaboration between Harry and Meghan about leadership and philanthropy.

3 Ways Meghan Makes Money On Her Own

Before marrying Harry, Meghan was doing just fine as an actress, reportedly bringing in around $50,000 per episode of the cable show Suits, which made her a well-known talent in Hollywood. She also scored parts in a number of other programs and small movies, all of which lined her pockets as well. Now, she is worth more than ever before and the future looks bright when it comes to Meghan’s earning potential on her own.

Last year, Meghan earned what was surely a sizable paycheck for narrating a Disney documentary titled simply Elephant. That might have been a one-off engagement — or the first of many efforts in a new line of work.

Meghan also released a children’s book last month through Random House called The Bench. The fun page-turner was reportedly inspired by what she observed between Harry and his son, and it quickly became a New York Times bestseller. Meghan reportedly got a $700,000 advance for the book, but it’s unclear if more books can be expected.

Separate from her famous husband, Meghan also recently invested in a California-based coffee company called Clevr Blends, which refers to itself as “a woman-led, mission-driven wellness company.” How much she put into the venture also wasn’t stated publicly, but with her name attached, sales have improved noticeably, and the mother of two could make a pretty penny off of her deal.

What Is Harry & Meghan’s Net Worth?

They may be connected to one of the only royal families with any power left in the world, but that doesn't necessarily mean that Harry and Meghan are super rich. Their exact net worth is disputed, with Celebrity Net Worth cites a $60 million figure, along with Women’s Health Magazine, Hello Magazine, and Parade.

Meanwhile, Forbes reported in 2021 that the number at $10 million. Forbes cites their new $14.7 million home in Montecito, CA and expenses from their move from the U.K., which they reportedly had to pay for themselves, as the reasoning behind a lower figure. However, their wealth is likely more than only $10 million, with new ventures coming to fruition since then.

How Do They Compare To The Rest Of The Royal Family?

A net worth of $60 million would be fantastic for almost any couple, but when that sum is compared to the wealthy family from which they just removed themselves (at least professionally), it’s just a drop in the bucket. Forbes put the late Queen Elizabeth’s net worth at $500 million in 2019, and that doesn’t take into account many real estate holdings and priceless artifacts included in what is called the Crown Estate, which is connected to, but not owned by, the royal family. That trust is valued at more than $25 billion.

More like this
Prince Harry Incorrectly Recites Christina Aguilera’s “Genie In A Bottle” Lyrics
By Jake Viswanath
Meghan & Harry Respond To Jeremy Clarkson’s "Apology" Over *That* Column
By Sophie McEvoy
Here’s Why Tyler Perry Helped Prince Harry & Meghan Markle When They Moved
By Marina Watts
Emily Atack’s Net Worth Would Make Charlotte Hinchcliffe Proud
By El Hunt
Get Even More From Bustle — Sign Up For The Newsletter
From hair trends to relationship advice, our daily newsletter has everything you need to sound like a person who’s on TikTok, even if you aren’t.