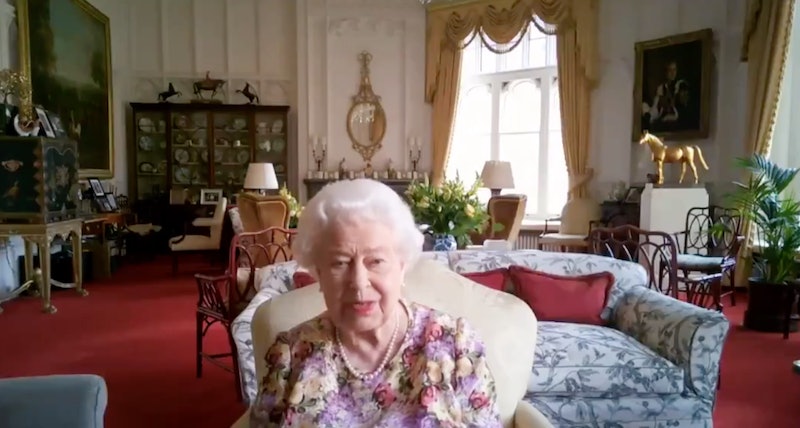 During lockdown, it's fair to say that Zoom has become an essential. Previously just used for business calls, the pandemic saw us turning to the platform for Friday night quizzes, virtual hen dos, and birthday celebrations with friends. And we weren't the only ones using it; members of the royal family such as Kate Middleton, Prince William, Prince Harry, and Meghan Markle often popped up on Zoom to support those on the front line as well as members of the organisations they are passionate about. And this week, Princess Anne and The Queen just had a video call of their own, it has been revealed.

A short behind-the-scenes clip of Her Majesty speaking to Princess Anne, along with four others, has been shared ahead of the airing of an ITV documentary to mark Princess Anne's 70th birthday. The video call took place during National Carers' Week, and sees Princess Anne introducing her Mother The Queen to the four others on the call. While Chris Ship initially reported that the call was hosted by Zoom, it in fact took place through Webex. Who knows? Maybe that'll be the video call service we'll all be using next.

After the Queen first appears on screen, she says: "Good morning. I'm very glad to have been able to join you," before Anne asks her, "Can you see everybody? You should have six people on your screen."

The Queen then replies that she can only see four, to which Anne responds jokily: "You don't need me, you know what I look like."

The warm exchange (which I'm sure will remind many of us what it's like to teach a parent or grandparent to use new technology) is being used to promote tonight's documentary entitled Anne: The Princess Royal at 70. Viewers will be able to see more of the chat during the TV show.

As mentioned, Queen Elizabeth and Princess Anne are not the first royal family members to have turned to Zoom during the coronavirus pandemic. Kate Middleton has been spotted on Zoom several times, as have Prince William, Prince Harry, Meghan Markle, and Prince Charles and Camilla. It's safe to say it has the royal seal of approval!