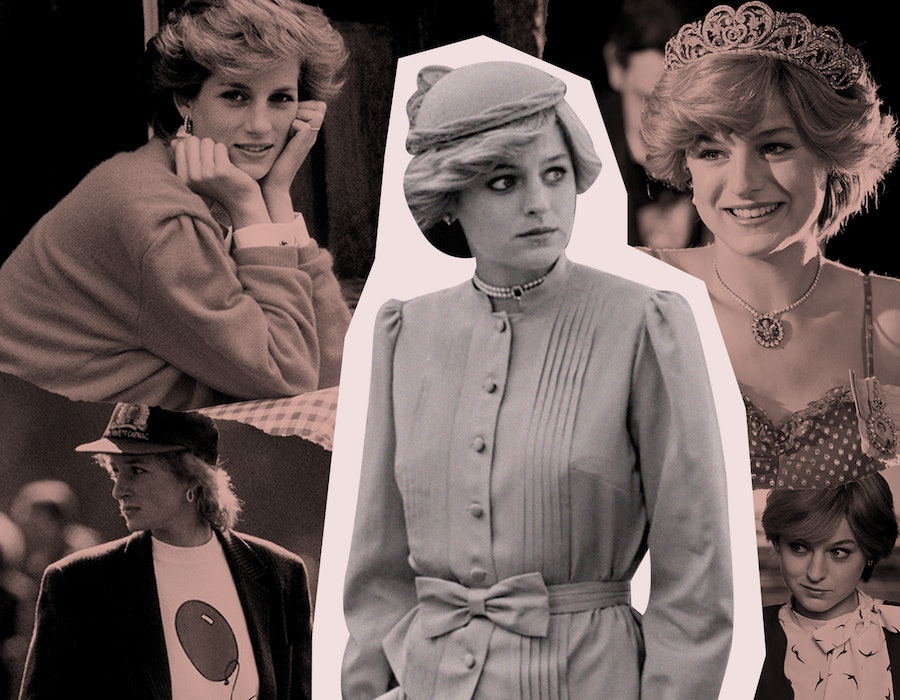 Twenty-three years after her death, the world has fallen in love with Princess Diana all over again.

Suddenly, she’s everywhere, from the The New York Times to The New Yorker. Reissues of her most famous sweaters are selling out. The BBC is reinvestigating a controversial interview from 1995.

The Dianaissance (trademark Dana Schwartz) is no doubt thanks to the newest season of The Crown, in which Peter Morgan and Netflix finally deliver the storyline we’ve been waiting for from the beginning: the doomed romance between Diana Spencer (beautiful, sad flower) and Prince Charles (human zucchini).

I’ve been a devoted fan of The Crown since the beginning, but Season 4 has completely captivated me. From the moment actress Emma Corrin peeked up from beneath a curtain of blonde bangs, I’ve been obsessed. I whipped through the Diana documentary on Netflix, and devoured a five-part podcast series about her. I convinced myself that I, too, would be able to wear bike shorts and a crew-neck sweatshirt and look chic and not like a college freshman on laundry day who doesn’t care what people think.

Diana — the real, non-fictional Diana — has never really occupied a major place in my consciousness. I was 4 when she died, and I don’t remember anything about it beyond getting a purple Beanie Baby that I vaguely knew was attached to some princess and some tragedy. Diana existed to me only in the broadest possible strokes: the young girl who had the fairy-tale wedding, the unhappy marriage, the schism with the royal family, and the violent, possibly mysterious end.

We don’t love celebrities for what they do — we love them for who they are.

Watching The Crown and learning about Diana, I'm finally understanding how she became an icon for an entire generation. And, if you’ll forgive me, I think the enduring cultural obsession with Diana is best explained with reference to Taylor Swift.

First, there’s the wish fulfillment aspect. Diana was a living Disney princess, the embodiment of the fantasy that so many young girls are taught to have since childhood. She was fabulously wealthy, had amazing famous friends, wore stunningly gorgeous clothes. Humans are animals that love to live vicariously (why else would I torture myself with the sheer number of celebrities I follow on Instagram?), and Diana — beautiful, blonde, equally chic in couture and sweatpants — fit the bill in spades.

But there are plenty of rich people, plenty of celebrities, plenty of beautiful people. Diana’s ineffable magnetism came from the sense that she was real. The other royals were playing a part when they attended charity exhibitions or visited local schoolchildren, but Diana, she seemed like she actually cared. And her life was strung-through with the undercurrent of tragedy. She was jilted by her husband, unlucky in love, and desperate to find the right man who could save her.

We don’t love celebrities for what they do — we love them for who they are. As a teenager, I fell in love with Taylor Swift’s music, not just because it was catchy but because it felt like a secret window into a life that she was sharing with me. And then, shockingly, it turned out: Her feelings were just like mine.

In Maris Kreizman’s excellent book Slaughterhouse 90210, she pairs a photo of Swift with a quote from Joan Didion’s Slouching Towards Bethlehem: "Above all, she is the girl who 'feels' things, who has hung on to the freshness and pain of adolescence, the girl ever wounded, ever young.”

Here Swift was — this 5-foot-10-inch conventionally beautiful millionaire wearing gorgeous clothes and dating Jake Gyllenhaal and Harry Styles — and she was still tortured about why her boyfriend hadn’t called her. She had crushes and heartbreaks. And her lyrics miraculously did two things at once: They were diaristic insights into the tabloid relationships I couldn’t help but want to know everything about, and then, somehow, at the exact same time, they were perfectly applicable to my ordinary, suburban high school life.

How stark it is, seeing it on a screen: the unspoken jealousies, the ease with which arguments become about word choice and not what they’re actually about.

Diana didn’t express herself via writing or music — the details of her life came out encoded in gossip, through the patched-together narrative of paparazzi photographs. But that’s also the secret of our most popular celebrities. Superstars like Beyoncé and Taylor Swift have mastered the art of withholding information, and revealing themselves only with full control and meticulousness. They understand the fundamental truth known by lovers playing hard to get and horror movie directors alike: The chase is more thrilling than the reveal. Our minds fill in the blanks with something more compelling than the truth can ever be. Diana’s lack — the voids of her story and the shocking finality of her passing — makes us want to fill in the blanks the same way a brain hates an unfinished phrase or a chord left unresolved.

Watching Corrin as Diana all but beg her husband to love her, without knowing the right way to ask, and him batting each attempt back unperturbed, makes me remember all of the terrible relationships of my early 20s. How stark it is, seeing it on a screen: the unspoken jealousies, the ease with which arguments become about word choice and not what they’re actually about. How heartbreaking it is to see her crying about a toilet bowl, and hearing that achingly familiar splash of vomit hitting the water. She was flawed and unloved in the same ways I had been, but also conventionally gorgeous and superhumanly kind to strangers.

If true crime podcasts have made one thing clear, it’s that we just can’t get enough of dead, rich white women. Sharon Tate and Laura Palmer both have left an indelible footprint on our culture. Diana captivated us before she died — yes, the tragedy preserved her in glass as an icon, but she was beloved as a princess before her death, the girl with a title, money, fame, everything, but who still seemed just like us.

More like this
Charles & Diana Were Reportedly On Good Terms Before Her Death
By Darshita Goyal
Kate Winslet To Star In Russell T Davies' 'Dark Season' Revival
By Sam Ramsden
'Bel-Air' Season 2 Finally Has A Release Date & A New Trailer
By Brad Witter, Kadin Burnett and Sam Ramsden
Lib & Will’s Romance In 'The Wonder' Is Very Different From The Book
By Sam Ramsden
Get Even More From Bustle — Sign Up For The Newsletter