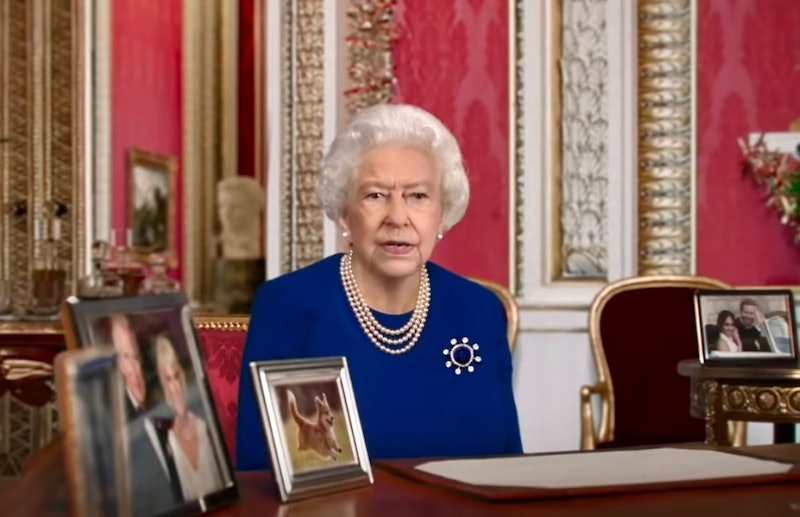 Because royals apparently can't always keep it 100 on the BBC, the U.K.'s Channel 4 released a Queen Elizabeth deepfake video in which shade and sass hilariously reign supreme. The parody of the monarch's annual televised Christmas speech shows a digitally altered version of the queen throwing some playful jabs at her fellow royal family members and even closes with an epic TikTok dance performance. And entertaining as it is, there is also a point: The trust-themed moral of all the silliness is that one must learn to question "whether what we see and hear is always as it seems" in the age of misinformation.

After joking that 2020's "toilet roll shortages" led most people to finally understand "how it feels to have a predicament on the throne," the digitized queen (voiced by actor Debra Stephenson) first throws shade at Prince Harry and Meghan Markle — and the entire country of Canada. "One thing that has sustained many of us is our families, which is why I was so saddened by the departure of Harry and Meghan," she deadpans. "There are few things more hurtful than someone telling you they prefer the company of Canadians."

The green-screen video also references Prince Andrew's Jeffrey Epstein scandal, Prime Minister Boris Johnson's COVID-19 diagnosis, as well as the role technology has played in helping tackle 2020's many challenges. "Like many of you, when I wasn't settling down with my husband to 'Netflix and Phil,' as I like to call it, I was perfecting my moves for TikTok," the faux queen says. She then goes on to perform an elaborate dance routine given that Prince Philip has "nodded off in front of Home Alone 2."

Channel 4 said it intended the video to be a "stark warning" about the threat of fake news in the digital era, per The Guardian, with Program Director Ian Katz describing the parody as "a powerful reminder that we can no longer trust our own eyes." The broadcast did draw some criticism, however, particularly for potentially leading viewers to believe deepfake technology is more prevalent than it really is. "We should be really careful about making people think that they can’t believe what they see," said Sam Gregory, the program director of Witness, an organization that helps people use video and technology to protect and defend human rights.

As deepfakes expert Henry Ajder told the paper, however, he doesn't think Channel 4's video is "sufficiently realistic to be a concern." He did suggest using disclaimers and watermarks, however: "As a society, we need to figure out what uses for deepfakes we deem acceptable, and how we can navigate a future where synthetic media is an increasingly big part of our lives."

For now, viewers can at least enjoy the entertainment of the faux queen's dance moves this way — in case that Strictly Come Dancing casting call never comes to fruition.