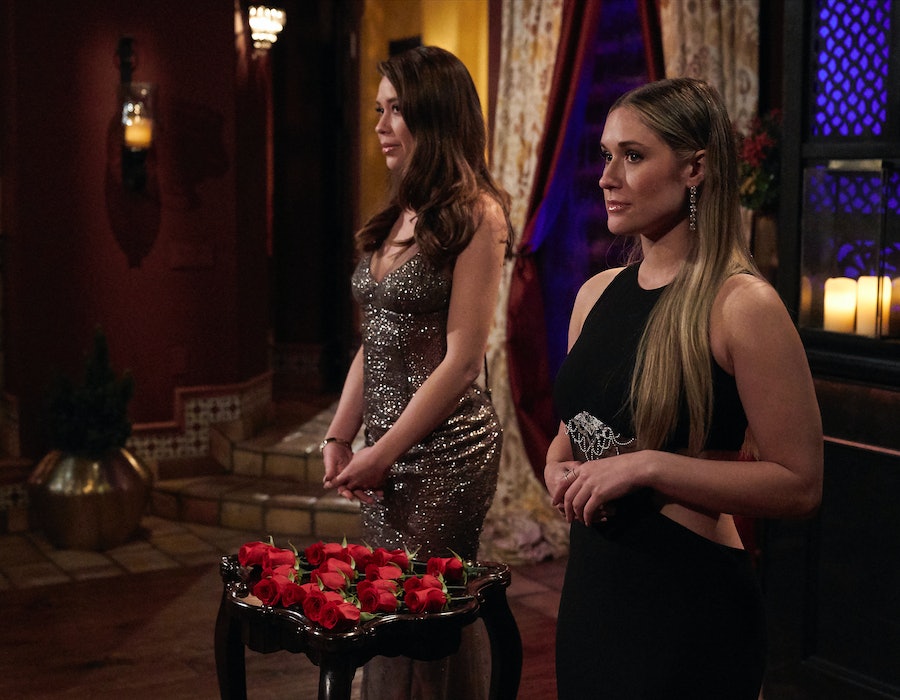 In the opening minutes of The Bachelorette’s nineteenth season, host Jesse Palmer asked both Rachel Recchia and Gabby Windey a maddening question: “How is this whole thing gonna work?”

That was all the confirmation we needed that this two-Bachelorettes “experiment” might not be the most empowering for either woman. Of course Palmer knows how this “whole thing” is going to work! There’s no way a show like this would start filming without a plan. And yet, throughout the first several episodes, The Bachelorette has passed the buck to Rachel and Gabby whenever possible, pretending as though the women themselves are deciding how to adapt the show’s traditional format to their situation.

Particularly vexing was a week three conversation in which they were shown “deciding” to divvy up the remaining men. “It’s kind of up to them to reciprocate it or decide not to continue, I guess,” Rachel says, as though she’s improvising, when of course the show was always going to have to split up the cast into two pools for logistical reasons — and could have told us this from the start.

The Bachelorette can’t really be a power fantasy if the leads don’t have the power.

The reason for this ruse is obvious: Back in Season 11, the show faced backlash for casting both Kaitlyn Bristowe and Britt Nilsson as potential Bachelorettes and letting the cast of men decide who would become the lead. (Nilsson, the loser of the vote, went home on night one). That pressure effectively pitted two women against each other in a way that has loomed large over this season. Notably, Bristowe herself has been publicly critical of the decision to require two women to share a season of The Bachelorette when The Bachelor, to our knowledge, has never asked two men to helm one season.

“Am I being dramatic?” Bristowe asked on Twitter. “I cannot believe they are doing this to these women, and to the men.”

To answer her question, I don’t think it’s dramatic to hate the new format — or at least to take issue with the show’s presentation of it.

My first experience of The Bachelor franchise was Andi Dorfman’s season of The Bachelorette back in 2014. What drew me to the show initially was how much authority it seemed to give this woman: Dorfman got to command rooms in big gowns, deciding who got sent home and who survived to see another week. Yes, there were still tears, fights, and cliffhangers, but at the end of the day, the Bachelorette held the cards. There were moments when she could be genuinely fearsome in an awe-inspiring way. It was a power fantasy in its purest form.

Contrast that with the current season of The Bachelorette and it’s clear that Rachel and Gabby’s wings have been clipped. Recent episodes have pushed one lead or the other to the point of tears. The low point, of course, was the week three rose ceremony in which the men decided whether or not they would accept a rose from Rachel or Gabby, effectively putting the two women in the same embarrassing position as Bristowe and Nilsson in 2015. Worse, the show essentially left the new leads believing that they were the engineers of their own humiliation.

“This was supposed to be us taking the power back,” Rachel told Gabby and producers after multiple men rejected her offer of a rose. “We literally handed it right back to all of them by doing this.”

And therein lies the root of the issue: The Bachelorette can’t really be a power fantasy if the leads don’t have the power. Rachel and Gabby might have technically been holding the roses in that ceremony, but it was the men who got final say. Is it any surprise that Dorfman is also a noted critic of the Season 19 format? She recently told Entertainment Tonight that the twin-leads decision struck her as “a little sexist.” I’ll disagree with that assessment when the host takes a rose away from a male lead who was just turned down by a woman.

I wouldn’t critique this franchise so vigorously if I didn’t also love it, and I think there’s plenty of time for course correction in the future. In some ways, having twin leads is a refreshing change for a show that must now compete with Love Island, FBoy Island, and other more modern programs. But without communicating the rules in advance, it’s been kind of messy — and not in the fun reality-TV way. I want the show to keep experimenting and evolving for the better, continuing to cast more diverse contestants and adapting to 21st-century sexual mores, but I want it to be forthright about how any new formats are going to work, instead of using that confusion as the only engine of drama to the detriment of its leads. After a few especially emotionally taxing seasons of both The Bachelor and Bachelorette, I think there’s one tradition that’s worth preserving: letting the lead feel more in charge.

With Logan teed up to switch teams from Rachel to Gabby in week five, and with both leads repeatedly doubting their own abilities and worthiness, I’m doubtful we’ll get to see the two women reclaim their power until the latter days of the season. “I quit,” Rachel says in a recent sizzle reel for the forthcoming episodes, adding, “I don’t want to do this anymore.”

I want to see a Bachelorette season where the lead wants to do it, beginning to end.