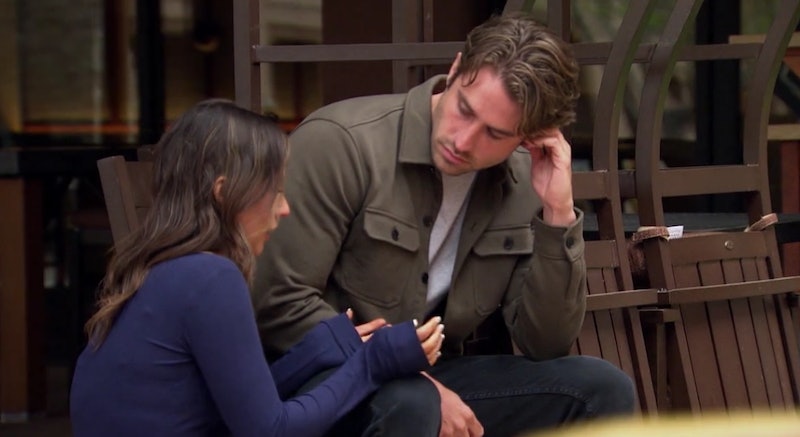 Season 17 of The Bachelorette concluded Monday night with three hours of high ponytails, one giant engagement ring, and a spicy confrontation between Katie Thurston and her second runner-up Greg Grippo, to whom she hadn’t spoken since he unexpectedly left in the episode prior. After informing his family she was “the one,” Greg told Katie he’d never been so happy in a relationship, but then quickly became insecure when she didn’t mirror his language. Among Bachelor Nation, former-resident-nice-guy Greg, and the Bachelorette herself, there was indeed a “disconnect” about their fallout, specifically around what constitutes gaslighting and the difference between someone being emotional versus emotionally manipulative.

On the pyramid of Instagrammable pop-psychology terms, “gaslighting” is near the top. It’s a term that’s thrown around like Mardi Grad beads in February, and like most things on the internet, deserves more nuance than it often gets. Though it was first coined in the 1930s by English playwright Patrick Hamilton, “gaslighting” has seen a solid increase in search volume since 2016, following the publication of Lauren Duca’s viral Teen Vogue article Donald Trump Is Gaslighting America. According to The Oxford English Dictionary, gaslighting means psychologically manipulating someone by making them doubt their own sanity or reality. In less clinical terms, it means twisting someone’s words or making someone doubt themselves and their actions.

Katie stans on Twitter are adamant that Greg’s behavior — declaring his love for Katie but abruptly leaving the next day when she didn’t express explicit reciprocation — is indicative of emotional manipulation, dubbing him “Gaslighting Greg” and praising her for calling him out during Monday’s finale. Yet, much of #BachNation on Twitter, (including former contestant Connor B.) are defending Greg as a vulnerable romantic, who bravely put himself out there, expressed his emotions, and was rejected by Katie.

So, What *Really* Constitutes Gaslighting in a Relationship?

A common thread on “Team Greg” Twitter (other than Greg being a Nice, Sensitive Guy™) is that gaslighting requires an ongoing pattern of manipulation over time, not just one or two intense conversations. As Dr. Carla Marie Manly, clinical psychologist and author of Date Smart explains, while the phrase originated as a term describing a pattern of manipulation, it’s morphed over time to apply to both continual and one-time circumstances, known as ongoing gaslighting and situational gaslighting, respectively.

According to Dr. Manly, ongoing gaslighting may look like a partner constantly guilting someone about their work, regularly picking fights about their partner’s family, or continually making their significant other feel like all the problems in the relationship are due to their flaws.

Situational gaslighting could mean a date twisting your words in a given conversation to make you feel like something is your fault, (or cough, cough, Greg telling Katie that she’s not validating him enough, after giving him a first impression rose, the first one-on-one, and a second one-on-one.)

Dr. Manly continues that because emotional manipulation is so personal and subjective, terms like “gaslighting” can start to mean different things for different people.

If someone is a survivor of long-term emotional abuse, they may understand “gaslighting” to mean a pattern of behavior, and may not use it to describe a single situation. “For those who prefer not to use the term gaslighting to define a singular or occasional incident, it’s appropriate to use a phrase like ‘undermining tactics focused on creating self-doubt,’” Dr. Manly says.

Dr. Manly continues that when someone is a gaslighter (or just an emotionally shady person), it can be hard to parse a single manipulative conversation from a trend of manipulative conversations. While they may deploy manipulation tactics increasingly over time, she notes their dysfunctional patterns are probably always prevalent. Because of this, Dr. Manly says, it’s not super productive to define gaslighting solely by the number of times it occurs.

“Gaslighters become so accustomed to their toxic strategies that they’ll regularly use them,” she says.

How Did Greg Go From “Nice Guy” to Gaslighter So Quickly?

In addition to labeling Greg a gaslighter during last night’s reunion, Katie stated she felt Greg’s frequent discussion of his own feelings was an act meant to gain her (and fan’s) trust, rather than a true reflection of his emotional availability. Dr. Manly describes Greg’s transformation from tender to tantrum-throwing as a big red flag.

Because Greg had spent the entire season talking about his feelings (read: crying), many fans (and for a while, Katie herself) saw him as a “Nice Guy.” Through this lens, Greg’s meltdown wasn’t him manipulating Katie, but rather another example of him expressing his feelings, stating his boundaries, and pouring out his heart to Katie, only for her to brush him off with “I like looking at you.”

Pricilla Martinez, relationship coach and CEO of Regroop Coaching, explains it can be extra complicated to decipher emotional vulnerability from unhealthy attachment when someone comes off as a “nice guy” type or a sensitive and expressive person.

However, she continues, earnest and healthy expressions of love don’t come with expectations or comparisons. In other words, if someone is shaming you for not responding in a specific way, telling you that you don’t care enough, or expecting you to mirror their language exactly — it’s time for a check-in.

“Nice guys who don't respect you aren't nice guys,” Martinez says. “If someone is manipulative, they are interested in your needs to the extent that it serves them. If they are victimizing themselves, that isn't your cue to figure out how to show ‘more’.”

Additionally, Martinez cautions that when people create idealized or grandiose versions of you and your relationship, that can be another red flag.

“When someone is being genuine or vulnerable about their feelings, their language is specific to your relationship,” she says. “They don't try to change you to fit their vision but rather accept you. Their feelings are grounded in who you actually are and not an idealized version of who they believe you to be.”