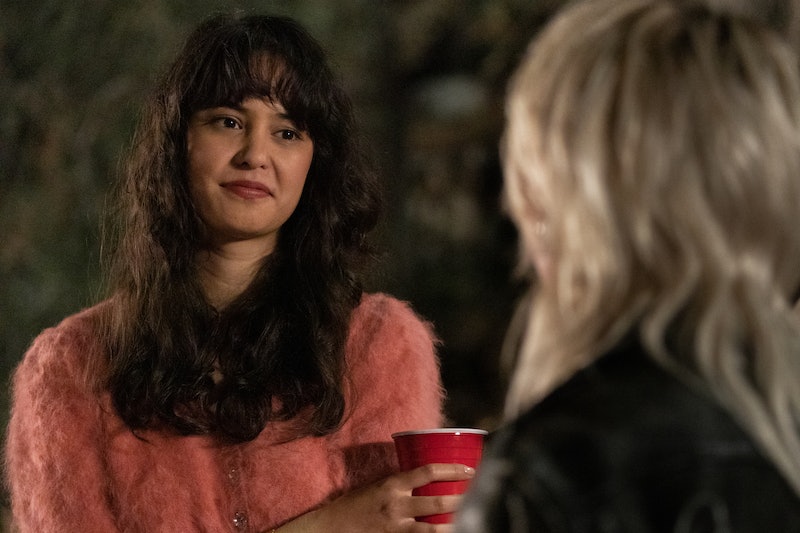 Spoilers ahead for Yellowjackets Season 1. The build-up to Yellowjackets’ season finale on Jan. 16 has been a terrifying, theory-filled ride — one whose many mysteries are not likely to wrap up conclusively anytime soon (hooray for that Season 2 announcement!). In the wake of a plane crash so harrowing it almost makes Grey’s Anatomy’s “Flight” episode look quaint, we’ve seen the soccer players deal with trauma, social breakdown, and endless enigmas lurking in the woods. But perhaps the biggest mystery surrounds a fellow survivor who made it back home.

As was predicted by many viewers, Lottie (Courtney Eaton) was finally revealed to be the “Antler Queen” (an apt, fandom-coined term) in Episode 9 — but honestly, that was just one of the countless questions surrounding her character. What about Lottie’s status in the present day? Or the source of her apparent clairvoyance? Her medication is implied to treat schizophrenia — and since she’s run out, it follows that her extremely vivid visions could be a result of being newly unmedicated. At the same time, a younger Lottie definitely seems to have had legitimate foreknowledge of the future (remember the car crash with her parents?), and her insights have resurfaced after the crash.

The Deer Bone Provides Protection... In A Different Way

One of the most recent clues that points to Lottie’s clairvoyance is the deer bone necklace she gives Van in Episode 7 — miraculously, it’s uncharred, whereas the rest of the carcass was burned. “I think it will keep you safe,” she says ahead of Van, Taissa, and co.’s expedition. Taissa is skeptical, but after she takes it away, Van is almost killed in a terrifying wolf attack.

Redditor knaverave sees the incident as proof that Lottie’s legit — or at the very least, her talisman is. Believed dead, Van is almost burned in a makeshift funeral pyre but awakens (or comes back to life?) before the ceremony goes down and makes her really, really dead.

“She looks pretty dead up until that point, so maybe I'm just not buying the suspension of disbelief that she was alive and they didn't check her pulse or anything ... but she, just like the talisman Lottie gives her, ‘doesn't burn at all,’” knaverave wrote, wondering if “this ‘resurrection’ [could] be interpreted as Lottie’s first miracle.”

So maybe the temporary absence of the deer bone is what got Van hurt. Or perhaps she was always going to get hurt, but the bone revived her body. If the latter turns out to be true, then it takes Lottie’s abilities to a whole new level. She can bring people to life and basically enchant inanimate objects! It’s no wonder she takes on the Antler Queen mantle.

She Makes It Out Of The Woods Alive

On a show that’s split between two timelines, the absence of an adult version of a Yellowjacket is pretty concerning — so viewers would be wise to assume that Lottie probably died at some point between the plane crash and present day. However, Redditor slaayqueen has a pretty compelling theory as to how she may still be around in 2021.

“Her name being mentioned in the lawsuit article in Episode 5,” slaayqueen wrote, suggested Lottie was dead. But the lawsuit could be for something else, like Lottie returning in “a poor mental state,” especially considering her father’s aversion to her assumed abilities. “Like she came back after being off her meds for a solid 18+ months, blabbing about cannibal clans and killing her friends? So she’s institutionalised and put on heavy medication.”

In an interview with Vulture, Eaton acknowledged that “it would have been really hard to split her between two timelines,” though she’s open to exploring the concept of a grown-up Lottie in the future. “She would be a lot different in the adult version ... And if someone did come in later, we could pick it apart.”

So maybe there’s more to the Antler Queen situation than Yellowjackets is letting on. Lottie was ostensibly confirmed with the whole crown moment in Episode 9, of course, but as Twitter user rulesmysoul suggested, “They’re making it too ‘obvious’ for it to actually be her.”

In her Vulture interview, Eaton seemed to suggest she was, in fact, the Antler Queen: “I don’t know if it would make sense for a lot of other people the way it makes sense for Lottie.” Still, she acknowledged that the title “could be passed on” in future seasons. That lines up with Reddit user luckyrabbitfeets’ theory stating “when the coach mentions that deer shed their antlers each season that it’s a pretty big clue that AQ may rotate out and we may see more than one.”

In the meantime, Eaton is as into the theory game as you are. “I troll Reddit, and it’s interesting to see other people’s picks for who it is,” she said. A relatable (Antler) Queen.